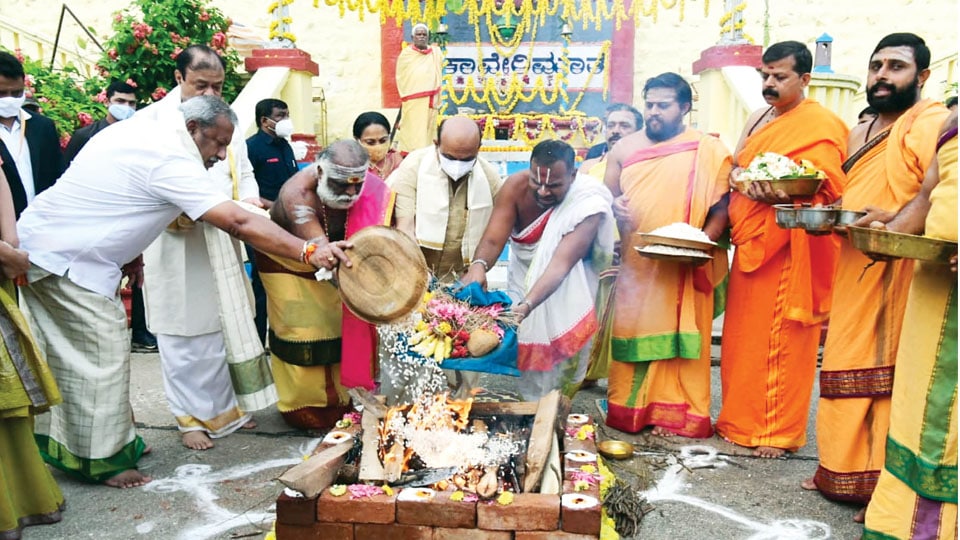 Srirangapatna: In the light of the Cauvery Water Management Authority (CWMA) asking Karnataka to make good in September the shortfall in the realisation of Cauvery water by Tamil Nadu and in the wake of falling water levels in Krishna Raja Sagar (KRS) Dam in Mandya, a special puja was performed by Chief Minister Basavaraj Bommai to the Statue of Goddess Cauvery early this morning.

The CM and his wife Chennamma arrived in KRS last night from Mysuru and they stayed at Hotel Royal Orchid Brindavan overnight. Along with the CM, his Cabinet colleagues R. Ashoka, Byrathi Basavaraj, B.C. Patil, V. Sunil Kumar & K.C. Narayanagowda, MLA Arvind Bellad too arrived at the hotel and had a team dinner.

Early this morning the CM came to the Dam dressed in a light khadi shirt, dhoti and shalya. They reached the puja venue for Purnahuti and performed the rituals.

Karnataka has released Cauvery river water in June-September and it has gone below the 100-thousand million cubic feet (tmcft) mark. Tamil Nadu has received about 91.47 tmcft, against the stipulated 123.14 tmcft, leaving a shortfall of 31.67 tmcft. This was raised by TN authorities at the last CWMA meeting.  According to the Karnataka State Natural Disaster Monitoring Centre, districts of Chikkamagaluru, Hassan and Kodagu, comprising the Cauvery catchment areas, have received below normal rainfall this year.

According to noted Astrologer and Vedic Scholar Dr. Bhanuprakash Sharma, who performed the rituals today, the CM and Ministers prayed for all the Dams in Karnataka to be full to meet the water demands. “Today is the beginning of Sharannavarathri and the puja rituals began at 4.30 am in auspicious Bramhi Muhurtha. Well-being of the land and its people were prayed for and a sankalpa was made for the KRS Dam to reach its maximum level,” he said.

The rituals included Parjanya Japa, Parjanya Homa, Ganapathi Homa, Punyaha, Kalasha Sthapana and Purnahuti. After the rituals, the CM left for Chamundi Hill in Mysuru to participate in Dasara inauguration.