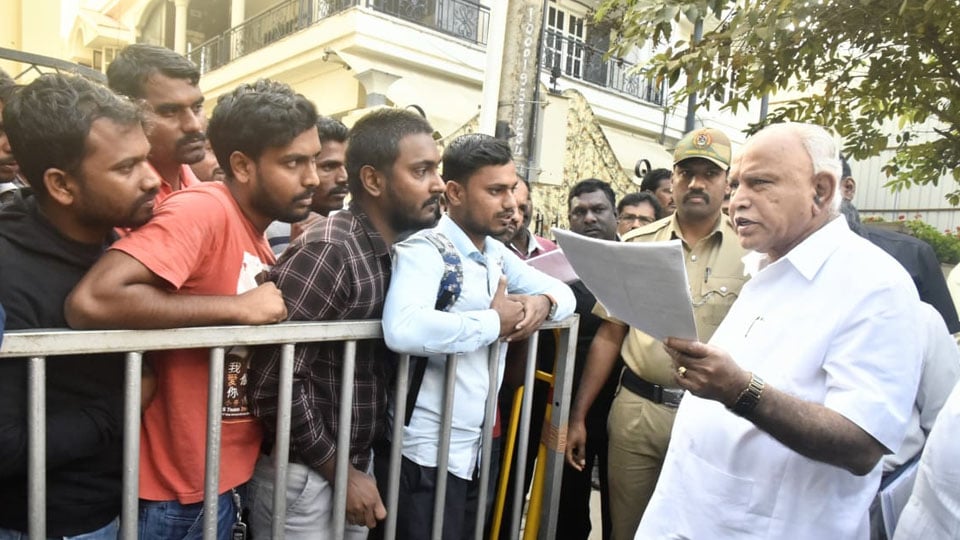 Bengaluru: With newly elected MLAs exerting relentless pressure for sooner inclusion in the Cabinet, Chief Minister B.S. Yediyurappa (BSY) is said to be in a dilemma over Cabinet expansion.

As the BJP High Command is yet to give nod for Cabinet expansion despite repeated pleas, a miffed Yediyurappa may take his own decision on expanding his Cabinet by inducting all the eleven MLAs who won the by-polls held in December last, according to a source.

Amidst speculations about Cabinet expansion, Yediyurappa, who spoke to press persons at Bengaluru before leaving for Raichur on Monday, said that there is no link between Delhi Assembly Polls and Cabinet expansion.

Maintaining that whatever is being reported in the media about Cabinet expansion are mere speculations, the CM said that he was ready to visit Delhi if BJP National President Amit Shah gives him an appointment for discussing Cabinet expansion.

However, he was hopeful that Cabinet expansion will take place before he leaves for Davos on Jan. 19 or at the end of this month, Yediyurappa said.

Pointing out that Amit Shah will be visiting the State on Jan.17 and 18, BSY said that he will discuss Cabinet expansion with him and expressed confidence that the expansion may take place after Shah’s visit.

Replying to a question on senior leader A.H. Vishwanath’s assertion that all the 17 MLAs from the Congress and JD(S) who quit leading to the collapse of the Coalition Government will get Cabinet berths, Yediyurappa said that the party High Command will decide on that.

Claiming that it was their resignation as Congress and JD(S) MLAs that triggered the collapse of the Coalition Government, they urged the Chief Minister to keep his word and induct them into the Cabinet within a couple of days after Sankranti.