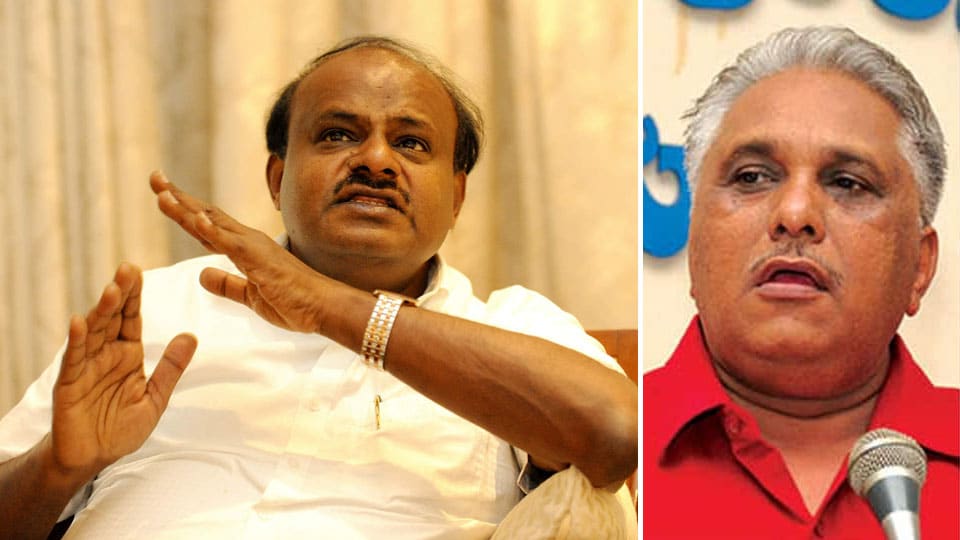 Mysuru: Even as the long-drawn Kurubarahall Sy. No.4 and Alanahalli Sy.  land row has continued to fester the residents of various MUDA layouts, here comes the news that Chief Minister H.D. Kumaraswamy has laid the foundation stone at the 22-acre University of Mysore campus, which also comes under the controversial Kurubarahalli Sy. No.4.

Star of Mysore was flooded with calls this morning, as many residents questioned the move of the Chief Minister yesterday to lay the foundation stone in a place which comes under Survey No. 4, even though they had brought to his notice the problems they were facing after the said lands had been declared B-Kharab.

Meanwhile, former MLC G. Madhusudhan, raising objection to the CM’s action, has  written a letter to the present Deputy Commissioner Abhiram G. Sankar, in this regard.

In the letter he has stated that the then Deputy Commissioner had declared Kuruburahalli Sy. No.4, Alanahalli Survey No.41 and Chowdahalli Sy. No.39 as B-Kharab land on May 26, 2015. In spite of this, CM Kumaraswamy has laid the foundation stone in Kuruburahalli Sy. No. 4 land belonging to University of Mysore near foot of Chamundi Hill, which has led to controversy.

Kurubarahalli Survey No.4 is B-Kharab (government land) and the District Administration has already passed an order earmarking it for public purpose. The Mysuru Tahsildar has ordered cancellation of all Khatas coming under Survey No.4. Hence, the Deputy Commissioner must immediately bring a stay order and initiate legal action. Otherwise a Public Interest Litigation (PIL) will be filed against the DC himself, Madhusudhan has warned.

READ ALSO  Bus fare hike to be decided in a week: CM

Is it not dereliction of duty if the public money is utilised to construct buildings in litigated properties by taking permission from the government, he asked and hoped that the DC will take suitable action in this regard, he has stated in the letter.

It may be recalled that on behalf of thousands of residents of Siddarthanagar, K.C. Nagar, J.C. Nagar and Alanahalli, coming under Kurubarahalli Survey No.4 and Alanahalli Survey No.41 living in the MUDA-allotted layouts, a delegation of Kurubarahalli Residents Welfare Association, led by B.P. Manjunath  met Chief Minister Kumaraswamy at Suttur Mutt premises in city on Aug. 11, 2018 where the latter had received thier memorandum.

But till today no action has been taken, the vexed residents told SOM.