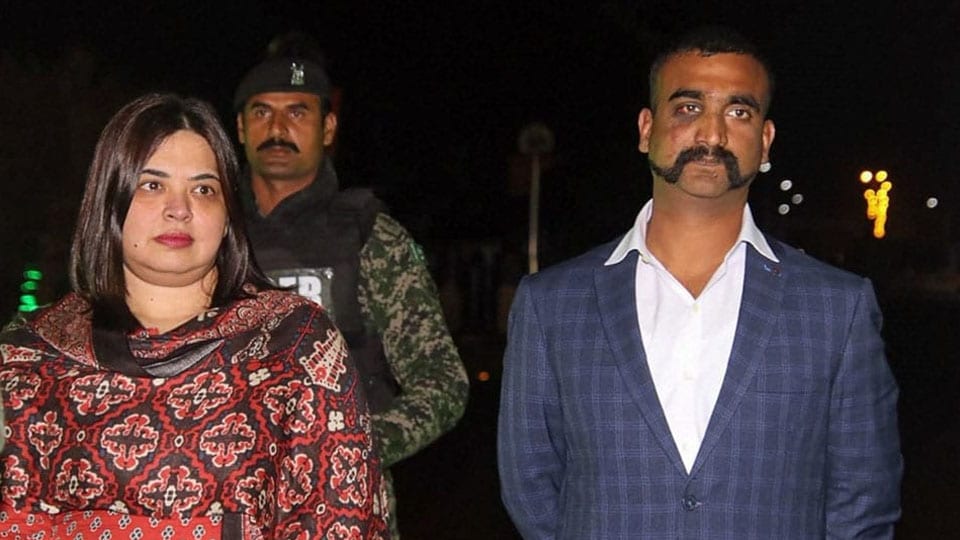 New Delhi: Two days after he was caught in Pakistan, Indian Air Force pilot Abhinandan Varthaman returned to India late last night. Attired in civilian clothes, Abhinandan was handed over to Indian officials at the Wagah border and was whisked away in a convoy by Indian officials, away from the public glare. He walked across the Zero Line at 9.20 pm, about four hours later that he was reportedly scheduled to return.

“Wing Commander Abhinandan Varthaman has been handed over to us as per standard operating procedure of the IAF. He is now being taken for a detailed medical check-up,” Air Vice- Marshal R.G.K. Kapoor, Assistant Chief of Air Staff (ACAS) Operations (Space), told reporters at Attari in Amritsar, reading from a text.

The IAF pilot’s return was delayed as he was asked to record a statement on camera by Pakistani authorities before he was allowed to cross the border. The recording released on the official Twitter handle of Government of Pakistan was later deleted. It was not clear whether he was made to record the video under duress. The video also had several jump cuts indicating that it had been edited heavily. “Recording of his video message caused a delay in his handing over,” a source said.

In the video message released an hour before his arrival in India, Varthaman said he entered Pakistan’s space to “find a target” but his aircraft was shot down. He also said that the Pakistani Army is “very professional” and looked after him well.

“I was in search of the target when your (Pakistan) Air Force shot me down. I had to eject the plane which had sustained damage. As soon as I ejected and when my parachute opened and I fell down, I had a pistol with me,” IAF pilot Abhinandan can be seen saying in the video. “There were many people. I had only one way to save myself: I dropped my pistol and tried to run.”

He also added that he was “saved” by the Pakistani Army when the locals tried to attack him. “People chased me, their emotions were running high. Just then, two Pakistani Army officials came and saved me. Pakistani army captains saved me from the people and did not let any harm come to me. They took me to their unit where I was administered first aid and then I was taken to the hospital where I further underwent a medical exam and received more aid,” he said.

“The army personnel saved me from the mob. The Pakistani army is very professional and I am impressed by it,” he said, while finishing with some comments criticising the Indian media.

Varthaman was brought from Islamabad to Wagah by the Pakistani authorities and handed over to Indian High Commission officials after completing the formalities. From there, he was taken by road to Amritsar by the IAF and flown to Delhi in an IAF aircraft.

Since morning, there was much back and forth on how and where he would be handed over. India had suggested that it would send a plane to pick him from Islamabad. “IAF Embraer jets were on standby to leave, in case Pakistan accepted it,” one defence official said.

However, Pakistan conveyed that since its air space was closed, it would bring him to the border point by road and hand him over to India there. Accordingly, Varthaman was brought in a Pakistani Army convoy while officials from the Indian High Commission came along close by. Amid tight security scores of people in jubilant mood, waving the national flag were seen gathered on the Indian side of the border at a distance from the Attari Joint Check Post to welcome the IAF pilot.