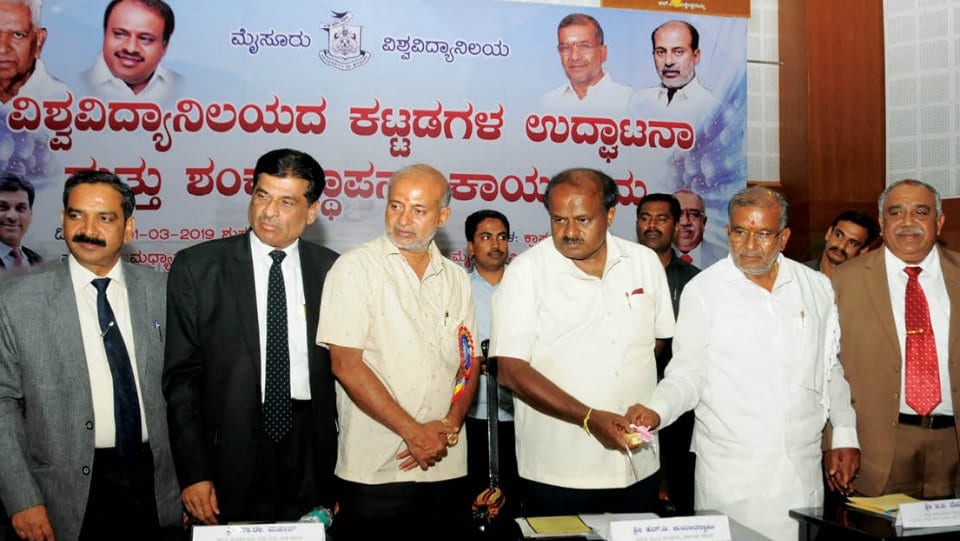 Mysuru: Chief Minister H.D. Kumaraswamy, in a clear message to  educationists in the State Universities, called upon them to improve the quality of education in tune with changes in the higher education system occurring across Universities in the world.

He was speaking after inaugurating seven new buildings of University of Mysore (UoM) and laying foundation stone for another UoM campus at the foot of Chamundi Hill by pressing a button at the Crawford Hall, here yesterday and said that at the international level, the winds of change are blowing in the field of higher education.

This has resulted in more number of students opting for distance education sitting at homes. Hence, the education experts must view these developments seriously, he added.

“I have held several meetings with the Vice-Chancellors of the Universities in the State regarding development of higher education and asked them to give me suggestions. Our government is committed to giving facilities to the State Universities on par with the national and international Universities, but the VCs of the respective Universities must join hands with the government,” the CM said.

The youth of our country are earning good reputation academically at the international level. In spite of this, the quality of research is going down. The education experts must try to reverse this trend. In the earlier days when good research happened, it used to be discussed at the national level. But now-a-days in the changing dynamics in the country, the level of research matching the changes is not happening. Hence, the researchers must give more focus in this direction, suggested Kumaraswamy.

“In today’s function I have inaugurated a 500-seater gallery at the University Swimming Pool, the Law School building, Organic Chemistry building, Genetics and Genomes building, Centenary Museum building, and also laid the foundation stone at the University site near foot of Chamundi Hill for the new buildings. The students must make use of these facilities for the development of the nation,” he said.

It is a matter of pride for all of us that the UoM which has celebrated one hundred years of existence has produced many education experts, littérateurs and world-class scientists. The State Government will co-operate with the UoM to identify itself at the national and international level, he said.

UoM to set up Engineering College

UoM Vice-Chancellor Prof. G. Hemantha Kumar in his welcome address said that in the new 22-acre campus at the foot of Chamundi Hill for which the CM laid the foundation stone, the University has plans to set up a Pharmacy Centre, Technical College and Research Centre.

“Mysuru is called the ‘Mecca of Learning.’ The Engineering College that is planned to be set up here will not be like other regular engineering colleges. It will be on the lines of National Institutes of Technology, where 50 per cent seats will be earmarked for the local students and for the remaining 50 per cent, students from outside will be given opportunities for admission,” he said and added, “A proposal for the cost of the constructions of the building will be prepared and submitted to the Government.”

Directorate of Distance Education was set up during the year 2018-19. Here courses like Economics, English, History, Kannada, Political Science, Sociology, Information Technology, BBA and M.Com have been introduced, he said.

“It will not be a mistake to call Chief Minister H. D. Kumaraswamy (HDK), who is always thinking about the all-round development of the State as ‘Dynamic Leader,’” said Indian Science Congress Association (ISCA) General President and former UoM Vice-Chancellor Prof. K.S. Rangappa.

Since the last eight months the CM has been successful in giving a blemish-less government. He has taken everyone into confidence in the coalition government and is moving forward, he said.

He recalled the time when he had appealed to the Government of India to consider the possibility of declaring UoM as ‘National University’ on par with IITs and Central Universities. But, unfortunately his appeal did not evoke any response from the Centre, he regretted.

Now, the Chief Minister is keen to see that we will at least this time get the status of the National University,  Rangappa added.

“We also want to convert K.R. Nagar as another educational hub as we have done in the case of Post-Graduate Centres in Mandya, Hassan and Chamarajanagar, which will be independent Universities in the days to come,” he said.