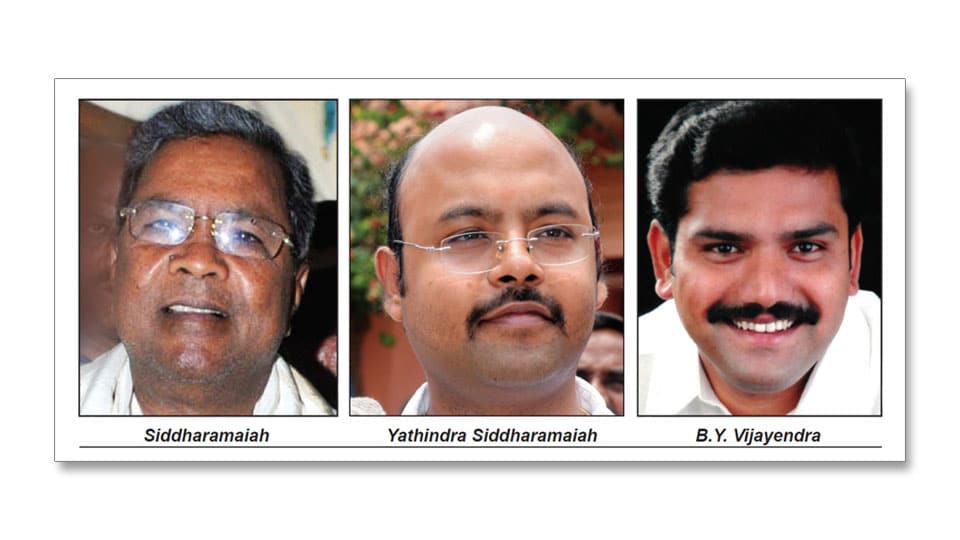 Mysuru:  Brushing off the reports of former Chief Minister B.S. Yeddyurappa’s son B.Y. Vijayendra gaining popularity in Varuna constituency, Chief Minster Siddharamaiah has said that Vijayendra will not make any impact at Varuna. “Ask Vijayendra’s father to contest in Varuna…,” a visibly upset Siddharamaiah told reporters yesterday when asked about the candidature of Vijayendra from Varuna where the CM is planning to field his son Dr. Yathindra Siddharamaiah.

The CM was speaking to media persons near his Ramakrishnanagar residence. Seeking to dismiss Vijayendra as an “outsider” and “irrelevant” unlike him (CM) or his son, Siddharamaiah, said: “Has he descended from heaven (forcing me to worry)? He is most irrelevant in my constituency.” He chided the media for asking “useless questions” on what he thinks about Vijayendra’s candidature.

At one point, Siddharamaiah told reporters: “Ask his father (Yeddyurappa) to come down to Mysuru and contest from Varuna.” According to the CM, Yeddyurappa is an outsider. “What does he have to do with Varuna segment?” asked Siddharamaiah. “Has he worked for the people’s welfare here? Who worked for the people’s development? I have represented Varuna for two terms and worked to improve the quality of life of voters here,” he said.

“The people of Varuna have elected me with a margin of over 30,000 votes and have made me the leader of the Opposition and also the CM. Even if my son stands for elections from Varuna tomorrow, voters will not choose him because he is my son. But, voters will see the development works initiated by me and then decide on whom to vote,” Siddharamaiah said.

Siddharamaiah said people cannot be fooled. “If voters elect somebody just because he is the son of a former CM, many would have got elected to the Assembly easily. It doesn’t work that way. Times have changed. Way back in 1952, a candidate got people’s approval after he held a meeting with the head of the village. It is not the case anymore,” he stated and said voters in both Varuna and Chamundeshwari will elect Congress.

On JD(S), the CM said that the party has become weak in the region. Reiterating that it is his last election, the CM said that former CMs Yeddyurappa and H.D. Kumaraswamy are daydreaming of becoming   the CM again.

“I have witnessed special strategies and general strategies of JD(S) leader H.D. Deve Gowda which he employed during the by-polls. Let him campaign too. But people are with me. In the BJP too, even if Prime Minister Narendra Modi and BJP President Amit Shah canvasses in Chamundeshwari, people are with me,” he said.

How was Indira Gandhi relevant for Chikkamagaluru, asks BJP leader

Reacting to Siddharamaiah’s statement that Vijayendra was an “outsider” and “irrelevant”, a BJP leader who wished to remain anonymous said that it was common for candidates to contest elections based on their support base. A candidate can choose any constituency to contest and that depends on the leader and his support base there. Nobody can question that.

“Moreover, even Siddharamaiah had contested from Koppal on a JD(S) ticket in 1991 in Lok Sabha elections. This being the case, how can Siddharamaiah question the contesting of Vijayendra from Varuna?” he asked.