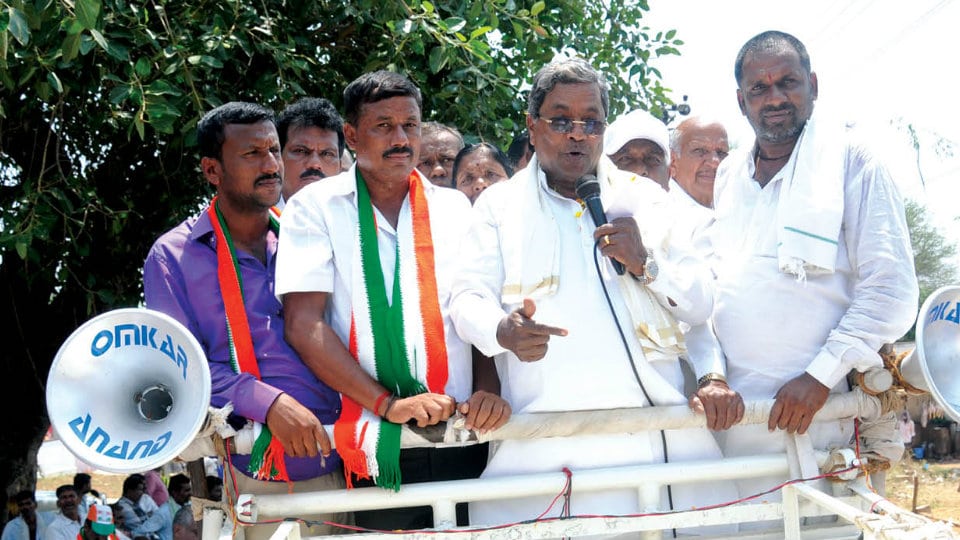 Mysuru: Chief Minister Siddharamaiah, after filing his nomination in the second Constituency, Badami in Bagalkot District of North Karnataka yesterday, landed at Mysore Airport in Mandakalli here this morning to continue his campaigning in Chamundeshwari Constituency.

Addressing the media soon after his arrival, the CM expressed great confidence in winning from Badami as he had received tremendous response from the people while filing his nomination.

Replying to a barrage of questions from media, he said that he would campaign in Chamundeshwari Constituency and would conclude it today by 10 pm before moving to other parts of the State.

“AICC (All India Congress Committee) President Rahul Gandhi will start his road show from tomorrow in Uttara Kannada district and a few other places before halting for the night at Murudeshwar. On Apr.27, he will campaign in Mangaluru, Bantwal, Dharmasthala, Gonikoppa and Periyapatna and fly out of Mysuru. He will not campaign in Mysuru this time,” said Siddharamaiah.

Asked about BSP Supremo Mayawati’s visit to the city today and her capacity to woo the Dalit voters in favour of JD(S), he said that the Dalit votes in Karnataka is always in favour of Congress and her campaigning would not make a difference to his party.
On BJP State President B.S. Yeddyurappa’s son B.Y. Vijayendra being denied the ticket to contest against his (Siddharamaiah) son Dr. Yathindra in Varuna Constituency, he said that Congress would win irrespective of the candidate fielded against his son.

To a question on the wave of Prime Minister Narendra Modi and BJP National President Amit Shah once they start campaigning, the CM said that the Congress had campaigners equal to match them like Rahul Gandhi, Mallikarjuna Kharge, KPCC President Dr. G. Parameshwara and others who are capable of countering Modi and Shah.

He said that BJP had deliberately fielded a weak candidate in Chamundeshwari, while in Badami, JD(S) had fielded a weak one and the only reason for this was the internal understanding between the BJP and the JD(S) to defeat the Congress.

Reacting to MLA M.H. Ambarish refusing to contest and whether it would affect the party, he said that since he (Ambarish) himself had given health issues as a reason, it would not affect the Party’s prospects, he said.

To another question on two Professors of University of Mysore, Prof. Mahesh Chandra Guru and Prof. Aravinda Malagatti being suspended, he said that all they had done was participate in a meeting of ‘Save Democracy’ which was a private function and they had not done anything wrong as they were just expressing their opinion in a democratic manner.

When the media asked a pointed question about election survey, he said, “I do not believe in such surveys. I have been in politics for quite long and I understand the pulse of the people. Just by taking a sample survey of 4,000 people they cannot predict the results correctly.”

On his JD(S) rival and State JD(S) President H.D. Kumaraswamy’s claim of becoming the Chief Minister again, he ridiculed and said that it was only his dream which would remain unfulfilled.