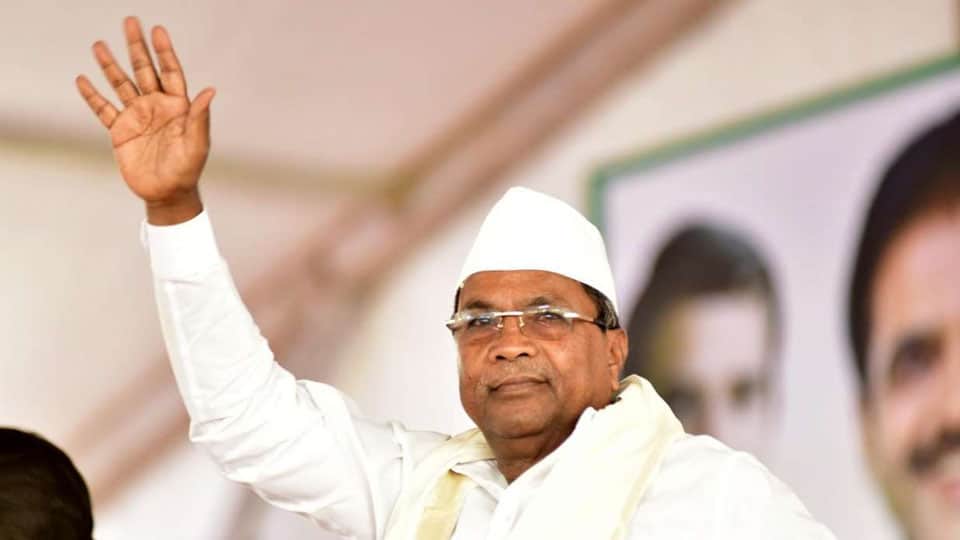 CM to contest from only one seat

Bengaluru: After nearly a week of hectic parleying, the Congress on Sunday night, announced its candidates for 218 Assembly seats for the May 12 polls. The party also ended much speculation about the Chief Minister contesting in two seats, by fielding CM Siddharamaiah from only Chamundeshwari in Mysuru and KPCC President Dr. G. Parameshwara from Koratagere (SC) in Tumakuru district. The CM’s son Dr. Yathindra Siddharamaiah will contest from Varuna in Mysuru district.

The Congress has not named candidates for six seats — Shantinagar in Bengaluru, Melukote, Kittur in Belagavi, Raichur Urban, Nagathana and Sindhgi in Vijayapura district. However in Melukote, the Congress has decided to support Darshan Puttannaiah, son of farmer leader and late MLA K.S. Puttannaiah, who is contesting from Karnataka Sarvodaya Party.

The party list which was expected to come out on Friday itself, was delayed reportedly due to the tussle among senior leaders ­— CM Siddharamaiah, KPCC President Dr. G. Parameshwara, Congress leader in Lok Sabha Mallikarjun Kharge and MP and former CM Veerappa Moily. However, the CM Managed to prevail upon the party top leadership and ensured tickets to all new entrants to the party, including seven rebel JD(S) MLAs and Independents.

The Congress has fielded more women candidates for the May 12 polls, while budding leaders from the party’s youth and student’s wings have also been chosen to test electoral waters. The list has 15 women candidates, five more than what the party had fielded in the previous Assembly elections. The party has also picked a few NSUI and Youth Congress leaders for the electoral battle.

Kin of top leaders to contest

In Kodagu, the Madikeri Assembly ticket has gone to H.S. Chandramouli, a State Public Prosecutor, for which AICC Spokesperson Brijesh Kalappa was a contender. The Virajpet ticket has been given to former MLC Arun Machaiah.

This apart, the party has given tickets to widows of two MLAs — Fathima, wife of late Qamarul Islam (Kalaburagi North) and Keerthana, wife of late Y.N. Rudresh Gowda (Belur).

Ex-Bureaucrats too in the fray

READ ALSO  Modi magic will not work in Karnataka: CM

Former BBMP Commissioner Siddhaiah has been fielded from Sakaleshpur (SC) and former IAS officer Syed Zammer Pasha is the party nominee from Kolar.

State Government Employees Union President B.P. Manjegowda, who quit service recently to enter politics, has been fielded from Holenarasipur to take on H.D. Revanna of JD(S).

Dr. H.C. Mahadevappa fails to get ticket for his son

The plans of CM Siddharamaiah’s close aide and Mysuru District Minister Dr. H.C. Mahadevappa to get a ticket for his son Sunil Bose from T.Narasipur has been spiked.

In Kalaburgi Rural (SC) Constituency, Vijayakumar, son of sitting MLA Ramakrishna, has been given the ticket. Byrathi Suresh, brother of sitting K.R. Puram Congress MLA B.S. Basavaraj, has been given the ticket from Hebbal, Father-son sitting MLAs, who have succeeded in getting the party ticket are S.S. Mallikarjuna and his father Shyamanuru Shivashankarappa, fighting in the two Constituencies from Davangere and Minister M. Krishnappa and his son Priya Krishna, from Vijayanagar and Govindarajanagar respectively in Bengaluru.

While Shyamanuru Shiva -shankarappa, 86, is the oldest Congress candidate in the fray, 28-year-old H.S. Manjunath Gowda, who is contesting from Mahalakshmi Layout in Bengaluru, is the youngest. Gowda is the State NSUI President.

The Congress has given 15 tickets to Muslims in its list of 218 candidates, which also features two Christian candidates. This is lesser when compared to 2013, when the party gave 19 seats. Peeved over ticket share to the Community, Muslim leaders of the party are likely to meet AICC President Rahul Gandhi on Monday and take up the issue.

Among tainted candidates, former Minister H.Y. Meti, who landed in a row over a sex CD, has been fielded from Bagalkot, while the Shantinagar seat in Bengaluru, whose sitting MLA N.A. Haris’ son was involved in a pub brawl is kept pending.

CM Siddharamaiah’s  plan to contest from two seats was shot down by the Party High Command. AICC President Rahul Gandhi is believed to have said that contesting from two seats would send out a signal that the CM was not confident of winning from Chamundeshwari, his home district. It is also said that senior party leaders Mallikarjun Kharge, Dr. M. Veerappa Moily and K. Rahman Khan opposed Siddharamaiah’s intention to contest from Badami in Bagalkot. These leaders are reported to have cited S.M. Krishna’s case (contested from Maddur in 1999 and Chamarajpet in 2004) while arguing that contesting from two Constituencies by the Chief Minister would send out   a wrong message to the electorate. 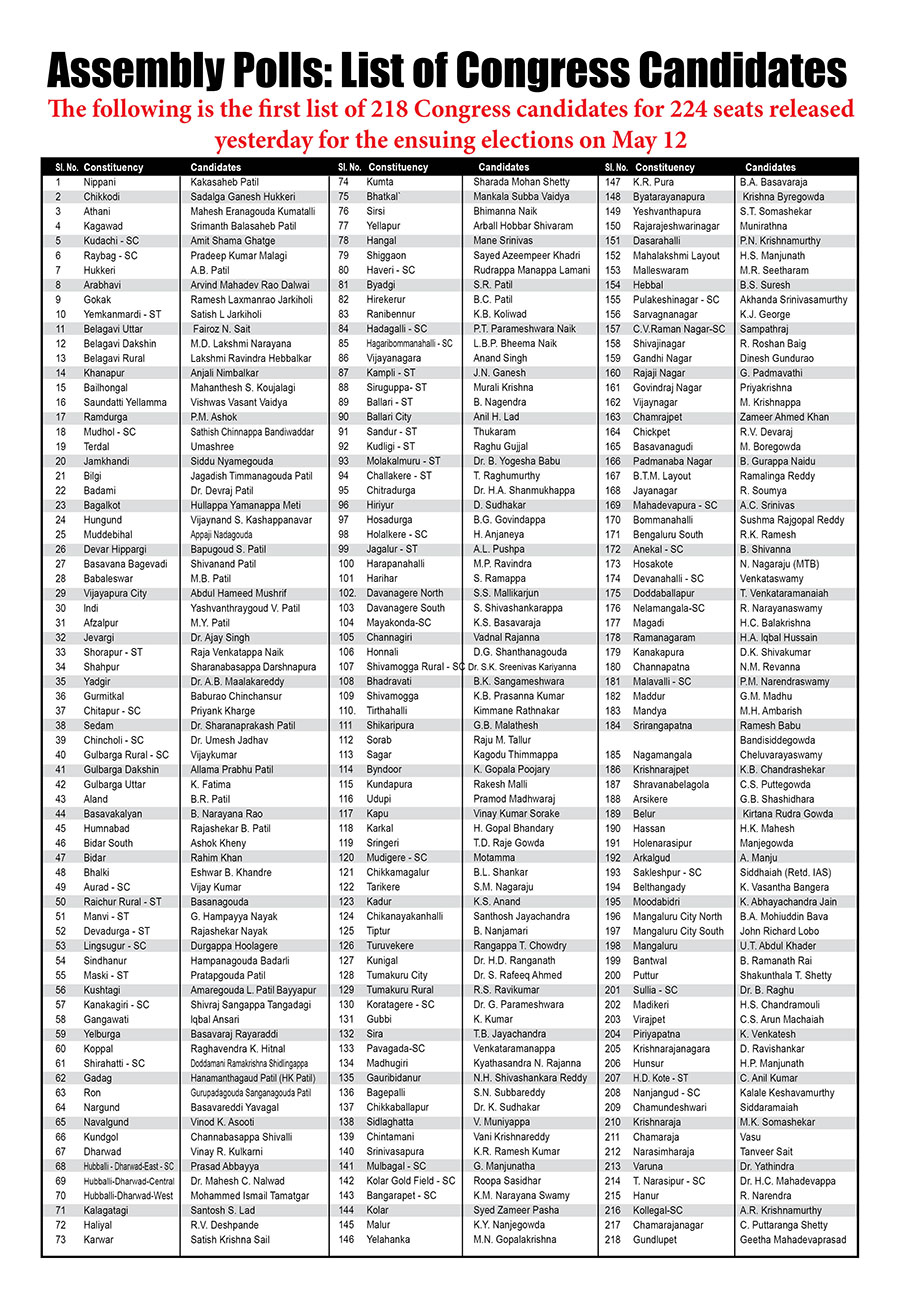