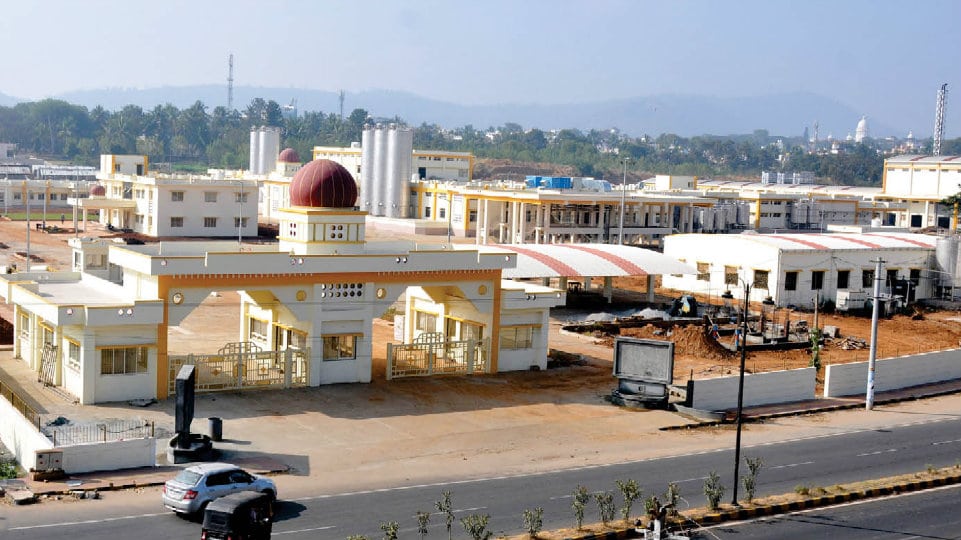 Mysuru: In yet another feather in the cap of the City of Palaces, a state-of-the-art Mega Dairy of Mysuru Milk Union Limited (MyMUL) has taken shape at Alanahalli.

Chief Minister H.D. Kumaraswamy will launch the facility tomorrow at 2.30 pm. It is a fully automated mega milk dairy set up by Mysuru District Cooperative Milk Producers’ Societies’ Union and will be operational from Mar. 31. Mysuru District Minister G.T. Devegowda will inaugurate the bust of Dr. Verghese Kurien, the ‘Father of the White Revolution’ in India.

Kurien’s “billion-litre idea” and “Operation Flood,” was the world’s largest agricultural dairy development programme and he was instrumental in revolutionising AMUL (Anand Milk Union Limited) Co-operative Society at Anand in Gujarat. Kurien’s bust has been sculpted by Mysuru’s Arun Yogiraj.

The mega dairy in Mysuru is built at an estimated cost of Rs. 187 crore on 13 acres of land, also making it the biggest compared to similar facilities in other parts of the State, especially in Bengaluru. “Though the State has two dairies with the latest technology, the new unit in Mysuru is the largest in Karnataka. The land of the new unit is spread over 13 acres out of 38.19 acres owned by Mysuru District Cooperative Milk Producers’ Societies’ Union,” MyMUL Managing Director M.S. Vijay Kumar told reporters yesterday at a press conference held at the new facility.

Unlike the existing plant at Siddarthanagar, the new plant is a fully automated facility with zero human intervention from the start to end stage of production. “The whole process, from offloading milk from the tankers till packing, is totally automated. The process can be controlled by a computer. As the milk will not be exposed to air throughout the process, the products will be of superior quality,” he assured.

The facility has the capacity to process six lakh litres milk a day, which can be increased to nine lakh litres. “It has been decided to cut down on employees who are deployed for odd work, especially in cleaning and other departments in the unit. Most of the equipment installed here is imported from Sweden, mainly those installed to pasteurise milk and separate cream from milk, he added. Milk production in Mysuru has increased in the recent years and the existing dairy on Bannur Road in Siddarthanagar has a processing capacity of three lakh litres a day. The dairy receives 6.5 lakh litres of milk a day supplied by 2.6 lakh farmers in Mysuru and Chamarajanagar districts. The existing unit was upgraded four times and as there was no option for extension, a new unit was established, he said.

“The government has invested Rs. 128 crore in the first phase, and works at a cost of Rs. 59 crore will be taken up in the second phase. Milk powder unit with the capacity to produce 30 metric tonnes will be established in phase two, Vijay Kumar said.

In all, there are 280 permanent staff and 450 outsourced staff, with a majority of permanent staff due to retire in another two or three years. “A proposal has been forwarded to the government to recruit 150 skilled staff, he said.

Before the press conference, Additional Director (Engineering) H.R. Raghu took the media around the facility and said unlike the existing plant, the new plant will be fully automated and controlled by the Supervisory Control and Data Acquisition (SCADA) system.

“Beginning from the reception bay, where milk will be unloaded from vans, to packing the same in the final stage, every stage of production will be manned by technology. It is expected to bring down dependency on human resources by 50 per cent. Only treated water generated through Reverse Osmosis (RO) method will be used to ensure quality product to consumers, with the thrust on providing high quality milk,” he said.