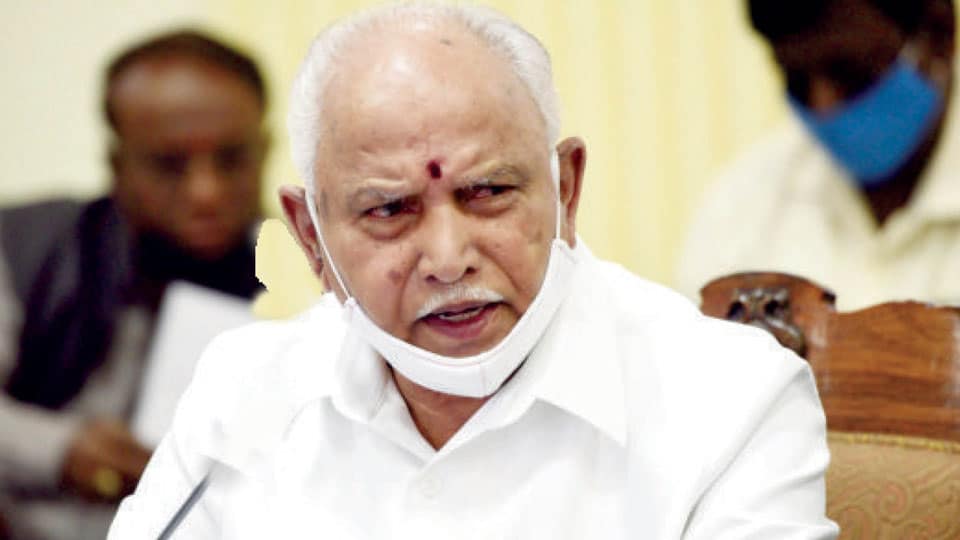 Mysore/Mysuru: With no signs of drop in COVID-19 pandemic cases across the State in general and Mysuru district in particular, Chief Minister B.S. Yediyurappa is learnt to have decided that only 500 persons should be allowed both inside and outside the Palace to witness the colourful ‘Jumboo Savari’ procession on Vijayadashami Day on Oct. 26.

Sources privy to the CM told Star of Mysore that the CM had already given instruction to Mysuru District Minister S.T. Somashekar not to make any statement regarding the attendance of people on Vijayadashami Day as well as for cultural programmes on all nine-days which are likely to be held inside the Palace.

Besides, the CM has said that only a bare minimum people should be allowed atop Chamundi Hill on Oct. 17 for the inauguration of Dasara festivities. The spike in Corona positive cases has become a matter of worry for the CM because of which he wanted the Nada Habba to be celebrated in most simple manner.

Health Department had already warned Yediyurappa about inability to handle any outbreak of COVID-19 cases during Dasara festival if thousands of tourists flock the city.

Already, all hospital beds were full and there is shortage of oxygen too. This has made the District Administration to work on a war-footing to improve health facility at least in the Government setup.

Chief guest to be decided in two days?

The sources said the CM was yet to decide chief guest for the inauguration of this year’s Dasara festival since it has been scaled down to the maximum.

This time, Yediyurappa was yet to decide because of his hectic schedule. The name is expected to be finalised in next two days. Even there is no word of giving ‘Asthan Vidwan’ State Award that is conferred on a renowned artiste during Dasara.

Meanwhile, District Minister Somashekar said except the inaugural event on Oct. 17, nothing has been finalised yet including the artistes to be invited to perform in Palace.

Usually, the artistes of national and international repute are booked at least a month in advance but this time, none of them have been contacted due to confusion over number of people to be allowed inside the Palace premises to watch the cultural events.

“I know only eight days are left for the Dasara opening. I am not sure about the availability of artistes as they too are scared of COVID-19 situation. Ultimately, the CM will take a final call,” he added.

After the meeting, the CM is likely to announce new steps to be taken to contain pandemic in the coming days as the situation was slightly out of control now.