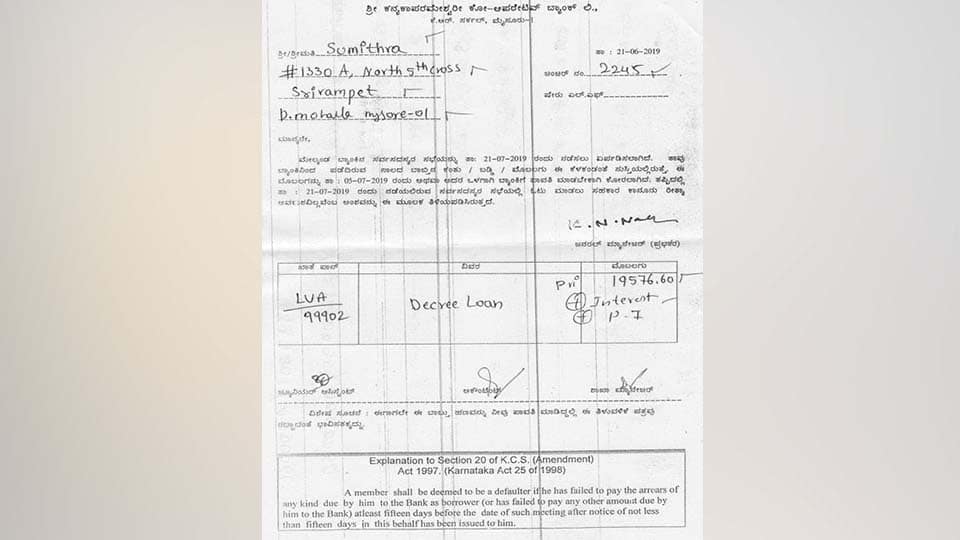 Mysore: A Co-operative Bank has issued loan repayment notice to an elderly couple after 24 years for Rs.8,000 loan taken and after repayment of half the loan amount.

The notice has been issued to 81-year-old Nagaraja Shetty and his wife 78-year-old Sumithra, residents of Vinoba Road 5th Cross in Shivarampet.

The couple about 25 years ago had taken a loan of Rs.8,000 from Sri Kanyakaparameshwari Co-operative Bank and had repaid half the loan amount. For the remaining loan amount, the Bank officials on Mar.11, 1995 had seized household items such as TV, table fan, wall clock, round stool and other items from the house and later there was not a single communication from the Bank. But after 24 years, the Bank has served three loan repayment notices, said the couple.

The Bank had seized all the household items for a very low price and now, notices have been served to pay Rs.19,576 (including interest), said the aged couple, who added that they are not being allowed to cast their votes at the Annual General Body Meeting held on July 21.

Nagaraja Shetty, speaking to Star of Mysore, said that his wife is suffering from age-related ailments and he is earning a meagre sum by taking care of accounts in two-three shops. He further said that he could not work more due to his age.

Sumitra said that a few days ago, Bank officials had come to the house and had issued a warning to repay the loan amount, when we showed the documents pertaining to the seizure of household items, the officials left without saying anything. “What can we do at this age? We had taken Rs.8,000 loan and had repaid half of it and the Bank has seized the household items for the remaining loan amount. Now the Bank has issued notice to pay Rs.19,576 and we do not know what to do,” said Sumitra.

READ ALSO  Elected as Board of Directors

As there is Annual General Body Meeting on July 21, we are issuing notices to all loan defaulters. The Bank has rights to issue notices to defaulters even after 100 years. We would collect all information from the Bank officials pertaining to the loan of Nagaraja Shetty and take the next step, said M. Badreesh, President, Sri Kanyakaparameshwari  Co-operative Bank