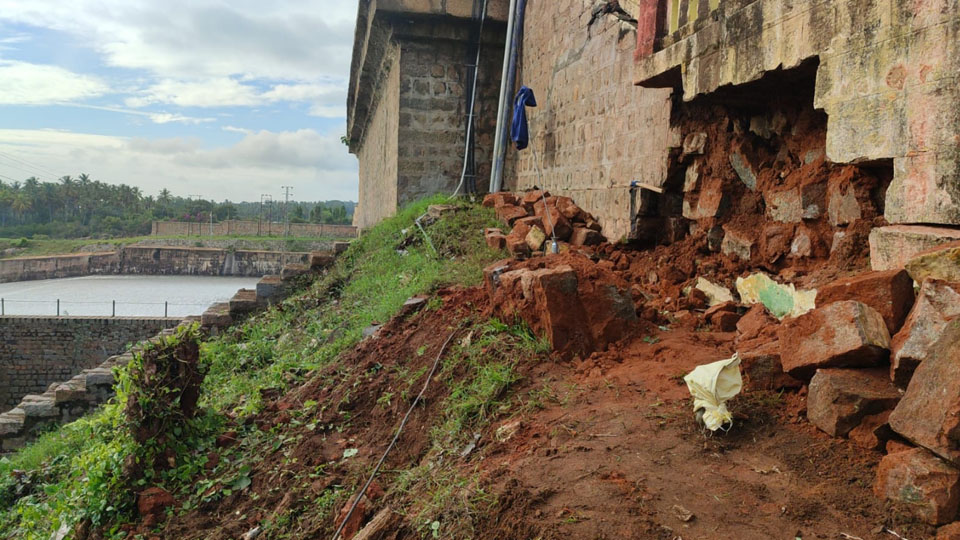 Collapsed portion of side wall at KRS Dam restored

Mysore/Mysuru: The minor side wall collapse under the Krishna Raja Sagar (KRS) Reservoir pedestrian ramp path on the way from KRS Dam to Brindavan Gardens and Cauvery statue has been restored.

The collapse occurred on Sunday night and the restoration work was completed within 24 hours before any further damage and public outcry. More than 30 stones adjacent to the wall of the steps had collapsed and now new stones, cement and a fresh layer of wall has been built to restore it back to the original shape.

Officials have already clarified that there is no threat to the Dam as the wall collapse occurred 11.5 metres from the main body of the Dam. The pedestrian ramp as well as the vehicle ramp had been built around the same time as KRS Dam was built.

Considering the safety of the pedestrian ramp, entry of tourists was banned through this walkway and even vehicle entry was restricted. Officials said that the collapse would have occurred due to wear and tear and also heavy rain that has been  lashing in the region since a week.

Meanwhile, Mandya MP Sumalatha Ambarish, who had voiced concern about the Dam safety due to rampant stone quarrying and blasting activities in nearby areas, described the incident as a ‘red alert’.

In a press release, she stated that as a responsible elected representative of Mandya she had raised the issue of threat to the Dam. “I had to receive a lot of flak from various quarters and officials too claimed that there was no threat. Now that a part of the wall near the Dam has collapsed, it is a clear sign of the threat to the Dam in the coming days,” she opined.

Later speaking to reporters, the Mandya MP said that it is not possible to construct such a Reservoir in the near future. “This is a warning bell. KRS may be safe now, but it should be safe in future as well. It is our responsibility to save the Dam,” she said and alleged that officers were giving false information and urged the State Government to take the incident seriously.