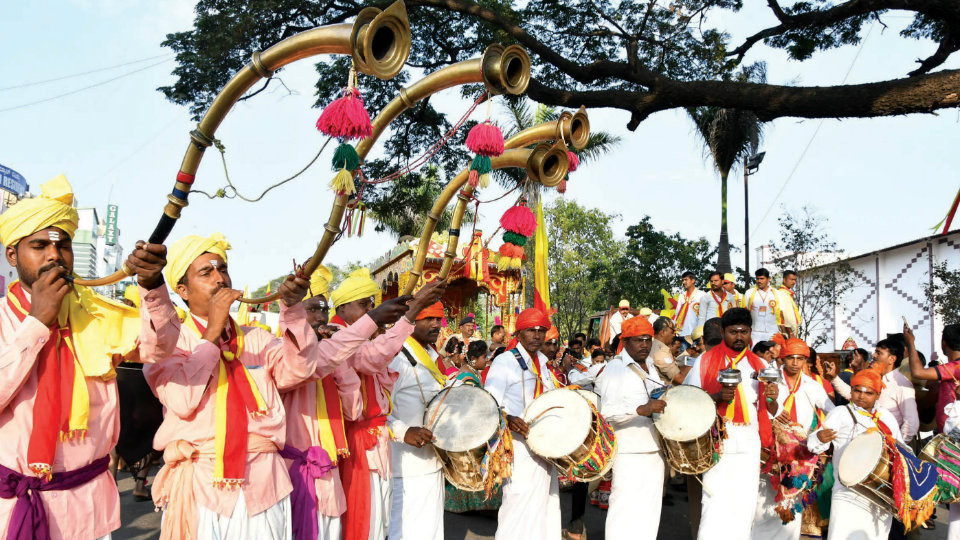 Kalaburagi: The three-day 85th Akhila Bharata Kannada Sahitya Sammelana got off to a colourful start at Kalaburagi, the hub of Kalyana Karnataka region, this morning.

The Meet President Dr. H.S. Venkateshamurthy was brought in a grand procession starting from S.M. Pandit Rangamandira in the heart of the city. The procession passed through Kharge Petrol Bunk on Sedam Road, Ring Road and Kusnoor Road, before reaching the sprawling Gulbarga University Campus, the venue of the Meet, covering a distance of about 6 kms.

More than 60 folk and cultural troupes from across the State, including 23 from host Kalaburagi district, accompanied the procession, which was welcomed with cheers from the people who had gathered  in large numbers along the entire procession route.

The Kalaburagi district unit of Karnataka State Government Employees Association presented a Rs.3 crore cheque to DC B. Sharath as its contribution for the Fest, which concludes on Feb.7.

Even as the all-important Literary Fest began, most of the ruling party MLAs from the district are camping in Bengaluru, lobbying for Ministerial berths in the Cabinet, which is scheduled to be expanded tomorrow.