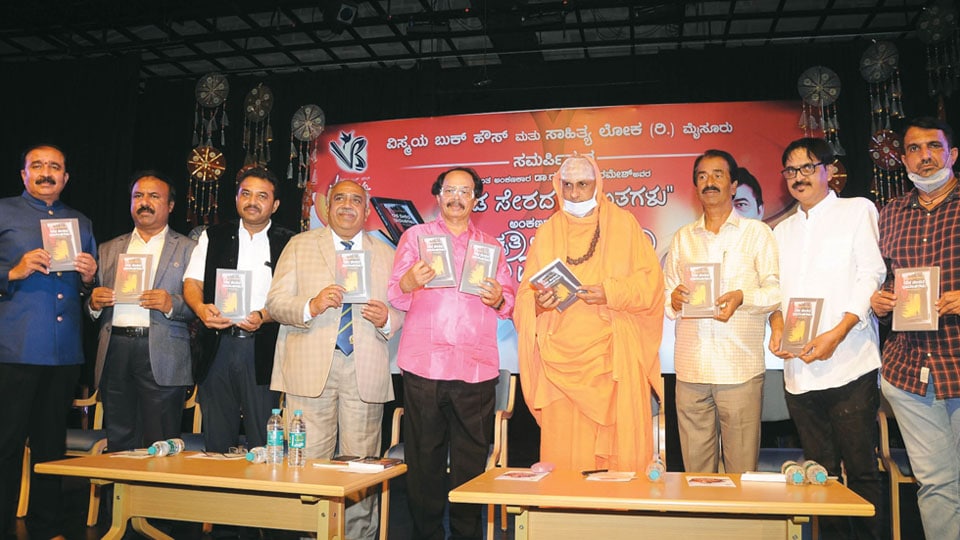 Speaking on the occasion, Nagathihalli Chandrashekar said that it is challenging to write columns at a time when curiosity on seeking freshness is fast evaporating. Noting that a book is always like a lit lamp, he said that the author Gubbigoodu Ramesh, who is also a member of the Kannada Development  Authority, has done an excellent job in bringing out this book, which is a collection of his column writings.

Pointing out that a columnist must be always alert and keep informed about the latest developments around the world, he said that while it is pertinent to seek freshness, at the same time, it is also important for a columnist to learn the art of transforming the old into new.

Maintaining that though the population of Kannadigas is increasing, the number of Kannada readers is decreasing by the day, he said that this is an alarming trend and Kannadigas should wake up to the realities of life which revolves around our land, language and culture.

Regretting that the cause of Kannada is getting weaker due to dwindling number of Kannada readers, Nagathihalli Chandrashekar reiterated that books are like earthen lamps that provide light and enlightenment and it is important for Kannadigas to develop a liking for reading books.

University of Mysore Vice-Chancellor Prof. G. Hemantha Kumar, in his address, said that more than 1.5 lakh people read Guddigoodu Ramesh’s columns that appear in the Kannada daily Mysuru Mithra, the sister concern of Star of Mysore. The VC hoped that Ramesh would contribute more to Kannada literature.

Author Gubbigoodu Ramesh, who also spoke, said that his columns focused more on contemporary topics, situations and incidents. Asserting that his columns are aimed at improving human bonding, he recalled his experiences with his readers as a columnist.