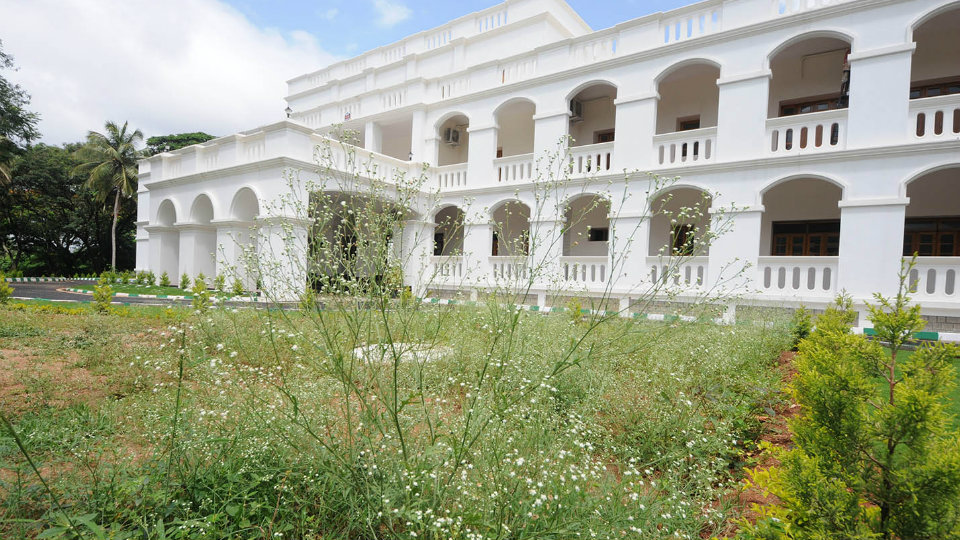 Come rainy season, you find one plant growing luxuriantly along roadsides, playgrounds, vacant sites, parks, drainage ditches, agricultural fields and practically everywhere. With this, we also get to hear the complaints made by the public about its nuisance.  This plant I am referring to is Parthenium (P.hysterophoru) – a weed popularly called gajarghass or Congress Grass.  Due to certain special traits, Parthenium can grow luxuriantly without any inhibition. If uncontrolled, Parthenium colonises the entire area in a matter of 3-4 years. The plants may grow as tall as 5-6 feet. Each plant may produce over 5,000-10,000 seeds which are very small and light in weight. They get readily disseminated by wind, water/ rain and movement of humans, animals and vehicles. 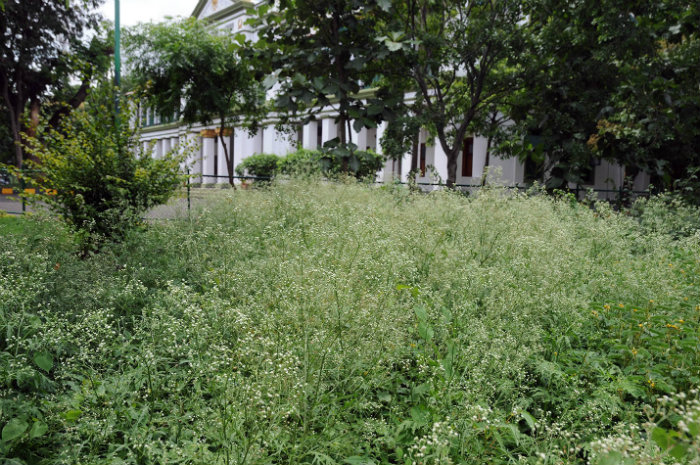 Parthenium in the premises of Chamundi guest house on JLB Road.

Thick growth of Parthenium chokes water ways and drainages and harbours mosquitoes, snakes and rodents.  It does affect the human health too. It causes skin allergies in a few individuals on direct contact with the plant and breathing difficulties in those suffering from asthma. There is no immediate cure for these ailments, except to keep away from the plant. The large-scale invasion of pasture and grass lands and waste lands by Parthenium deprives the herbivores — the cattle, sheep and goats of precious grass and other local plants on which they feed. In the absence of palatable vegetation, the herbivores are forced to feed on Parthenium which affects their health too.

It is an alien plant

The weed is believed to have been introduced to India as a contaminant through wheat imports from USA. It was first recorded in 1955 in Pune and then the weed spread rapidly covering the entire country within a span of 30-40 years. Even Andaman & Nicobar Islands have not been spared. Besides roadsides, railway lines, playgrounds, parks, game sanctuaries and other vacant places, Parthenium thrives best in neglected and poorly managed orchards, plantation crops and agricultural fields.

Parthenium is a successful weed hence it is very difficult to achieve full control. High seed production potential, easy dissemination of seeds, allelopathy (chemical inhibition of one plant or other organism by another, due to the release into the environment of substances acting as germination or growth inhibitors) and the ability to withstand pressures from livestock, insects and diseases, make the weed hard to control. 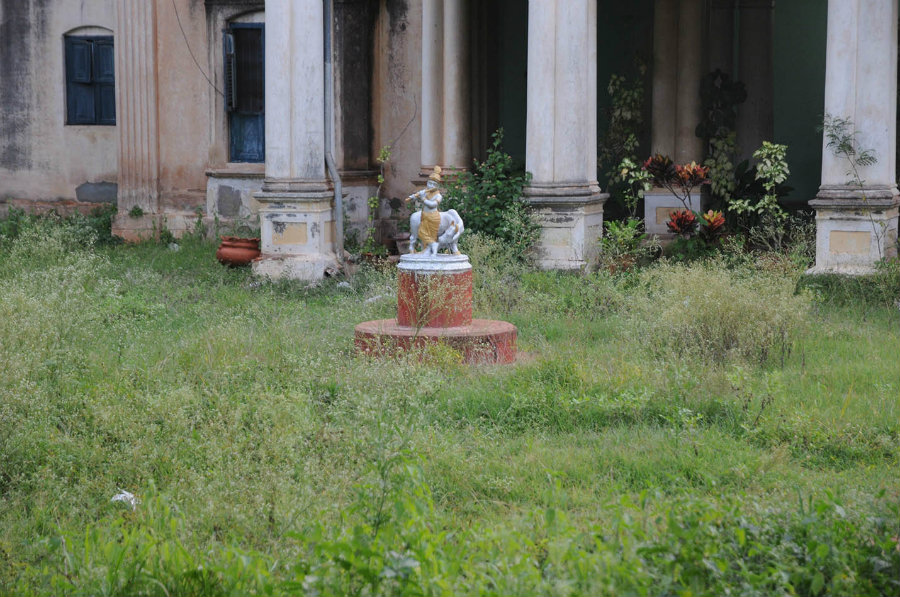 The most ideal method is to pull the plants with roots before they flower and set seeds. As weeds keep emerging throughout the season, it has to be done regularly. It is therefore, labour-intensive, back-breaking and costly. It is practical only in small areas – around your houses and apartments. Cutting the plants above round (as is done popularly) is of little use, as new shoots come up in no time.

Biological control – An insect introduced from Mexico (Mexican beetle – Zygogrammabicolorata), is recommended for the control of Parthenium. The grubs of this tiny insect (similar to ladybird beetle) selectively feed on leaves and flowers. The insect has been widely tested in the country and has been found not to attack any other vegetation, including crop plants. The method is natural, self-sustaining and economical.

The Directorate of Weed Research, Jabalpur, an institute under the ICAR has released the beetle in several parts of the country in the last over 20 years. However, the method is fraught with limitations. The beetle is active only during the rainy season. The grubs are tiny and a huge population build up is needed to cause any significant damage. But unfortunately by then, the Parthenium would have already set seeds ensuring the succession of the weed. However, the beetle would be quite effective on Parthenium plants emerging later in the season. I have seen the presence of the beetle in some locations in Mysuru. Their number, however, needs to be augmented (with human intervention) for any noticeable control of the weed.

A few local plants grown in the wild could be used to suppress Parthenium. Among them, Cassia Sericea has been found to be promising to suppress Parthenium on roadsides. Cassia Sericea seeds could be broadcast before rains. They grow profusely and do not allow Parthenium to grow under their canopy. They set seeds by the end of monsoon and germinate freely with the onset of rains the next year. Their seeds could be collected during October-November and spread on the target area before the onset of monsoon the following year.

Chemical method – A number of chemicals (herbicides) are effective against Parthenium. As enough care and caution is required in selecting the herbicide and using them in the field, it is better to seek expert advice on the matter.  Application of metribuzin at 0.5-1.0 % is recommended in non-agricultural lands. The herbicide is quite safe on local grasses but may affect other broadleaved plants. Make sure that no other useful plants are grown nearby. The treatment is very effective and costs very little compared to manual removal, therefore ideal for use on a large area.

At individual level, Parthenium cannot be controlled fully. Even if one tries there is always the possibility of fresh invasion with seeds coming through air and movement of livestock and vehicles. We need a community approach involving the participation public, NGOs and local civic bodies such as Gram Panchayats, municipalities, city corporations etc. Through such actions, a couple of Gram Panchayats in Punjab have been declared Parthenium-free. With such efforts, it is possible for Mysuru also to claim such recognition.

Native to North, Central and South America, Parthenium has been accidentally introduced into several countries and has become a serious agricultural and rangeland weed in parts of Australia, Asia, Africa and the Pacific Islands. It is one of the worst weeds in India, covering over 25-30 million hectares, causing huge economic losses with its negative impact on environment, agriculture, health and biodiversity.

No data is available on the economic losses caused by the weed, but I am sure it will run into several thousands of crores. Although introduced at the same time, compared to India, Australia has been able to manage the problem quite well and is worth emulating. Australia treats Parthenium as a Weed of National Significance and is legally declared as a noxious weed. There is local quarantine in operation. Vehicles (including the trains) originating from Parthenium-infested areas are sanitised to ensure that they don’t carry Parthenium seeds to newer areas.

India, in contrast, took the problem lightly and now it is too late for us to wage a war against this pernicious weed. Karnataka was the first State in India to legally name Parthenium as an obnoxious weed as early as in 1975. The current level of heavy to very heavy infestation of the weed in the entire state speaks of its lack of seriousness in managing the weed. It is time the State comes up with a proper action plan to prevent further spread of the weed and to recover the precious land encroached by Parthenium. 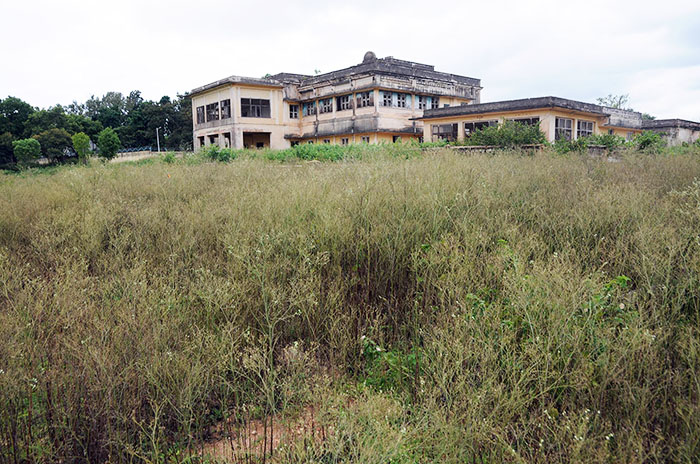 The unwanted weed seems to have invaded the neglected Chamundi Vihar Mansion on Male Mahadeshwara Temple Road in city.

Parthenium is popularly called Gajarghass or carrot weed as it resembles carrot plant at seedling stage, which is understandable. However, why the weed is called Congress Weed or Congress Grass is intriguing.  From what I could gather, it could be due to the fact the weed gained entry into India and was increasingly being noticed during the time when the Congress party was in power. It reminds us of another invasive weed Chromolaenaodorata (Siam weed) being locally called Communist Pacha (Communist weed) in Kerala as the plant was introduced there in the 1950s, the era when the Communists were in power!

Another explanation for why Parthenium is called the Congress Grass says that In 1950s, India was going through a famine. Indian National Congress decided to import wheat from USA. The wheat was of inferior quality and with that wheat the seeds of this deadly weed were mixed. While some say it was a deliberate mistake from Uncle Sam, others say it was an innocent mistake.

Whatever, the then Congress government did not bother to do a quality check before distribution of wheat and hence this weed’s seeds reached the masses. Even when it started appearing, the then Congress government failed to take initiatives to control the weed. Parthenium later resulted into an epidemic. These circumstances led people to name this weed as “Congress Grass”, a gift of Congress to the nation. 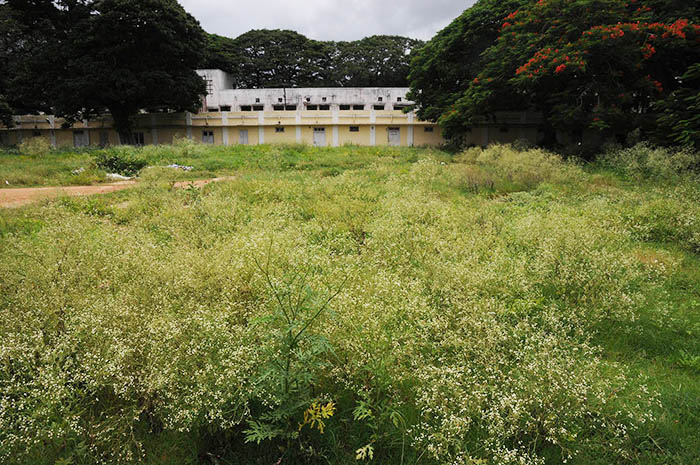 Wild growth of parthenium in the premises of old exhibition building adjacent to MMC&RI.

Following numerous complaints of weeds and bushes growth and dumping of garbage and waste at vacant sites, the Mysuru Urban Development Authority (MUDA) had some time back asked the owners of such sites to clean up their sites or pay a fine to MUDA and also face legal action. But as most of the layouts have been taken over by the Mysuru City Corporation, the MCC has decided to clean the weeds as a cleaning cess has already been collected from the site owners. 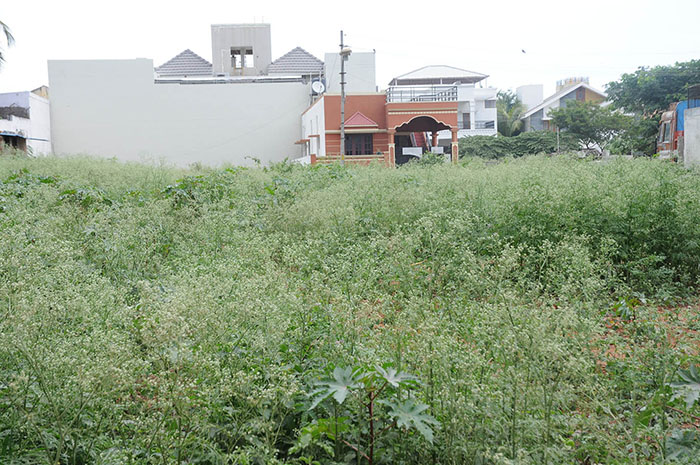 Wild growth of Parthenium in the vacant site.

Speaking to Star of Mysore, MCC Commissioner K.H. Jagadeesha said that the MCC was in the process of identifying the revenue collected from vacant sites across all the nine zones. “We have collected cleaning cess from site owners and will begin the cleaning process within a week or so,” he said. 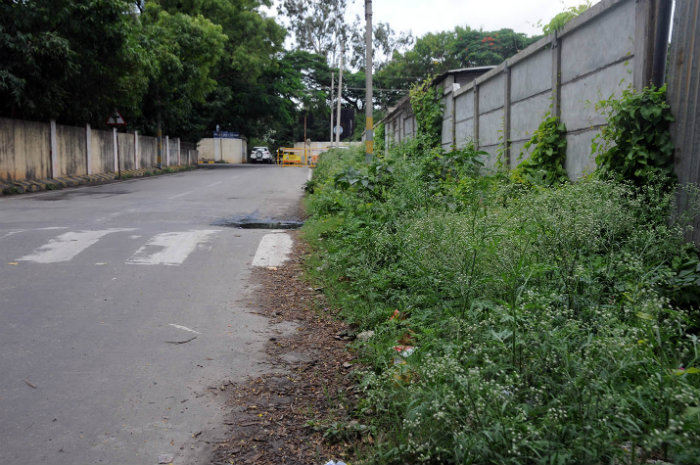 Dr. N.T. Yaduraju is an agricultural scientist specialised in weed science. As the Director of ICAR-Directorate of Weed Research, Jabalpur, he guided intensive research on Parthenium and was responsible for large-scale multiplication and release of Mexican beetle in several parts of the country.

He conceptualised the idea of Parthenium management through public participation and involvement of all stakeholders. He was instrumental in organising several awareness-raising activities including starting of Parthenium Awareness Week – a regular annual event held throughout the country.

He is the past President of Indian Society of Weed Science and Asian-Pacific Weed Science Society. He is an alumnus of University of Agricultural Sciences, Bangalore and did his Ph.D. from the University Of Reading, UK.