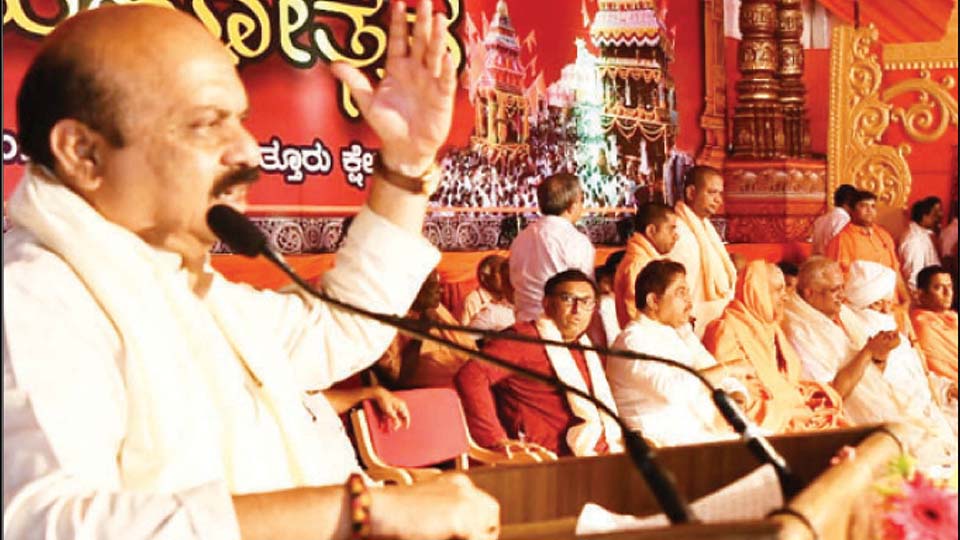 Nanjangud:Observing that jatras are reflective of our culture, Chief Minister Basavaraj Bommai said that the confluence of religion and livelihood will help in building a better and cultured society.

He was speaking at the valedictory of ‘Bhajana Mela’ organised as part of Sri Shivarathreeshwara Shivayogigala Jatra Mahotsava at Suttur in Nanjangud taluk on Sunday.

Maintaining that celebration of festival,  irrespective of caste, creed and religion with a sense of togetherness is itself a jatra, Bommai said that the Suttur Jatra is very much reflective of this practice.

Noting that our ancestors have created huge Rathas for espousing the cause of equality and equity, he opined that the small doors to Sanctum Sanctorum of temples are meant to shun our arrogance and audaciousness.

Contending that samskruti is driven by samskara, Bommai said that sacrifice is the crux of our samskruti and shunning of arrogance is our tradition, which should be taught to our future generations.

Continuing, the CM said that an educated society is a progressive and self-reliant society. Pointing out that mutts and  shrines  came to the help of the people by providing them food and shelter in the absence of Governments in the country in the pre-independence days, he said that Saints, Seers, Philosophers and the like have enriched our culture and traditions. The Suttur Mutt has been carrying forward our rich legacy, he said adding that the organisation of agricultural fairs, seminars, desi games etc., has made the jatra more purposeful and fruitful for the people.

Primary and Secondary Education Minister B.C. Nagesh, who also spoke, said that the British had imposed Macaulay system of education upon us in order to serve their own needs. But despite this, it was mutts like the Suttur Mutt which made the people’s feelings turn towards the society. Pointing out that Seers have suggested inclusion of lessons on moral and spiritual education and yoga in school curriculum, the Minister maintained that the Government will seriously consider the suggestions and advice of Seers in imparting value-based education.

ONE COMMENT ON THIS POST To “Confluence of Religion and Livelihood key for building better society: CM”