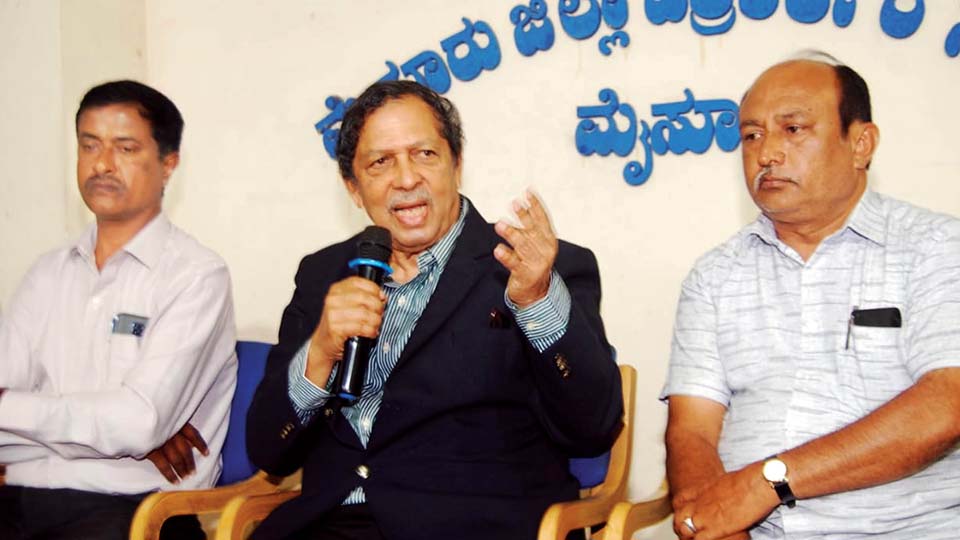 Mysuru; Former Karnataka Lokayukta and retired Supreme Court Judge Justice N. Santosh Hegde regretted that in today’s electoral scenario, issues pertaining to religion and language are whipped up to seek votes despite explicit guidelines in the Constitution and inspite of many rulings of the Supreme Court.

Participating at the Meet-the-Press organised by Mysuru District Journalists Association (MDJA) at Patrakarthara Bhavan this morning, Justice Hegde, one of the most respected personalities in India, said that emotive issues like religion and language are being used as trump cards to seek votes.

“No one is speaking about development or welfare. They want to grab power by hook or crook and all political parties are the same,” he said.

“One of the most dangerous things for conflict today is religion. In that background, there should be some effort from somebody or other to bring about peaceful coexistence, respecting each religion,” he added. He cautioned that if one goes by religion and language, the country will be destroyed and unfortunately, the four pillars of democracy — Legislature, Executive, Judiciary and the Media — are in the hands of greedy people.

“A society that worships the powerful has been created. We are hearing of a series of scams throughout the country since 1947. No political leader is bothered to cleanse the system. Instead, they are resorting to blame-game and grab power,” he added.

employed by them to achieve such wealth and power. This unabashed celebration of wealth and power is the primary reason for changing values and this attitude has to change,” he opined.

“Earlier, people never visited a person who has been to jail,  but now the accused are being welcomed in a grand manner and are offered posts like Chief Ministers and they get powerful portfolios. How is it possible for the corrupt to develop a State when there is a whole group of looters in the Government. Only allegations galore without a word being spoken about public welfare,” he regretted.

On the Executive, he explained how subordination of the executive to the Cabinet ensured its subservience. He quoted instances where Ministers and MLAs demanded officers of their choice in their Constituencies. “This affinity is seriously jeopardising the effective running of the institution of democracy,” former Lokayukta Justice Santosh Hegde added.

On the Media, he underscored the importance of probity in today’s media lest it has a disastrous effect on the functioning of democracy. “Today, media unfortunately, publicises just allegations made by one political party against the other. Media, at times, acts as a puppet at the hands of guilty politicians where even the most corrupt paint themselves as the most honest leaders,” he said.

“There is a growth of corruption in India. We are also losing humanism. Without these two things, it is not possible to bring about any change in society. So I go to educational institutions to talk to the youths so that they can change society. I have already visited 1,600 Schools. Today, we are in a society that respects money and power, nothing else. Honesty has no place in it. I have seen with my own eyes people go to jail; when they come out, people garland them,” he said.

“I gave the mining report. I named three Chief Ministers of a political party and nine Ministers. More than 700 Officers were involved in it. Look at the amount of cheating that was going on. The Lokayukta has filed charge-sheets but no action was taken. Parties just want to win, it doesn’t matter how. Even the electorate follows this — either they get bribed or vote along caste and community lines,” he said.

On the conflict between the Legislature and the Supreme Court Collegium, Justice Hegde said, “We are seeing the legislative authority trying to become the supreme power. The Government is seeking to influence the judiciary, which is unconstitutional. Collegium is an independent system and there is no political interference. These people want to bring their stooges into the judicial system,” he said.