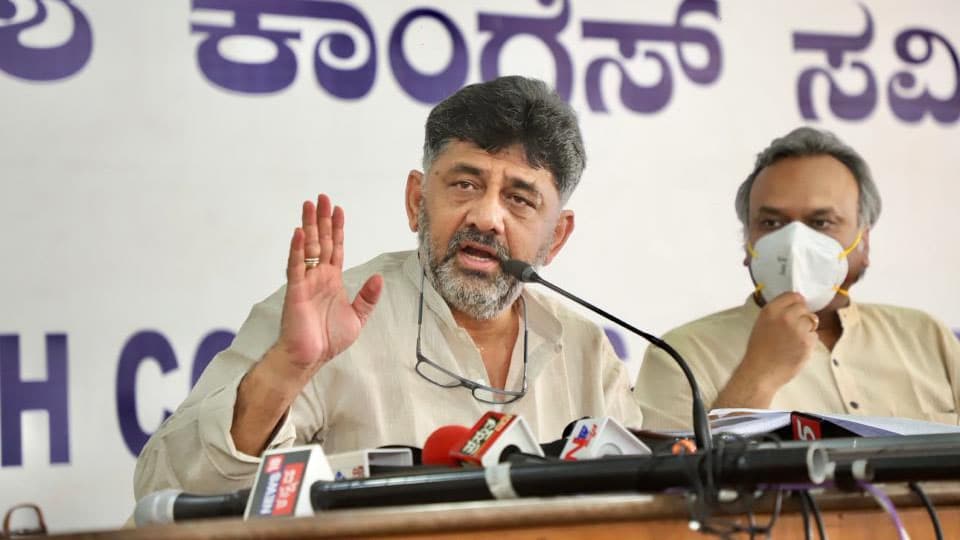 Bengaluru: Karnataka Congress on Thursday launched a Statewide ‘Outreach Campaign’ with an objective to provide relief to the people affected by COVID-19 and to collect data regarding the same.

KPCC President D.K. Shivakumar said, “Through this campaign, the party aims at providing relief especially to those who have kept essential services running but are not recognised as the frontline workers and to those worst affected by the pandemic, as well as gathering data of COVID affected and deceased family members.”

The Party has decided to engage party cadres from Pradesh Congress Committee (PCC) to the Panchayat level for establishing contact with target groups in urban, semi-urban and rural areas as per AICC’s directive.

“This campaign would help us disseminate information regarding issues related to COVID and post-COVID care and identifying the demands of COVID-affected families, in order to raise them politically. This outreach programme shall be done by organising visits by local leaders (at the level of District, Block and Taluk) to the households of the COVID-affected families,” Shivakumar said. According to the KPCC Chief, the outreach programme by the party will directly cover all the one-crore plus households of Karnataka in 30 days.

For the outreach programme, KPCC will identify five urban/semi-urban target groups and five rural groups and it will also be setting up a control room to collect the data. “Government of Karnataka is hiding actual Covid deaths;  so we want to uncover the actual figures and put it out in front of them,” said Shivakumar.

“We also demand a death audit by the Government. Deaths in Karnataka have been misrepresented. They have reported only around 30,000 deaths but they seem to have crossed a lakh mark. The Government has not done a proper survey regarding this. They just announced the Rs. 1 lakh relief package and did not act further. They didn’t take a timely decision on vaccination too and even denied our proposal of providing Rs. 100-crore for the same,” he said.

“People are in a real tough situation and most segments need adequate relief, but the State Government has made a joke of the situation by providing relief of just 1,000-3,000 rupees, which is not sufficient in any way. The Central as well as the State Governments are unaware of the problems being faced by the people of this State,” he opined.

READ ALSO  Brace up to endure winter amidst pandemic scare

Already 15,000 Congress Party workers across the State are working on the ground and providing relief and support to the people.

”Moving forward we will be streamlining the process and put in more efforts to make sure people are provided with adequate relief and support,” Shivakumar said while concluding his speech.