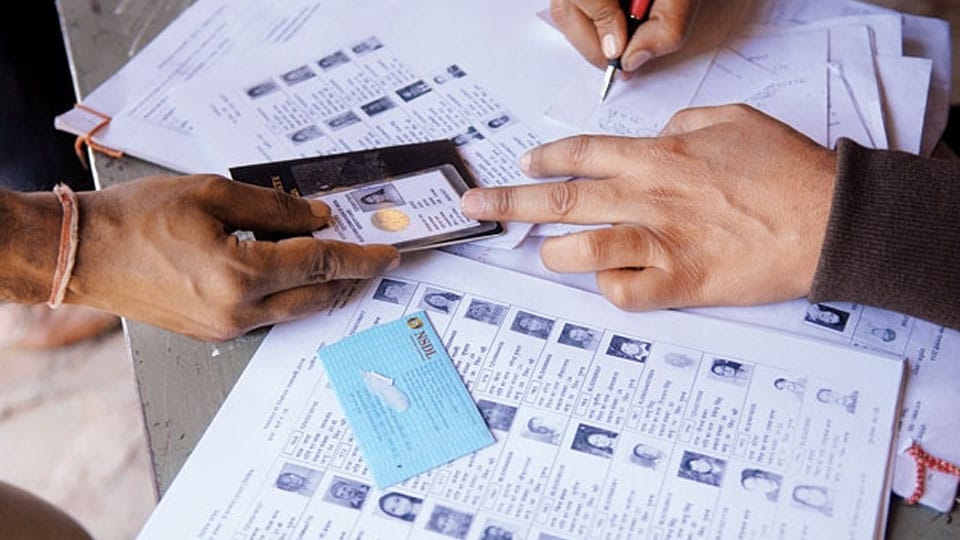 Process carried out as per law: DC clarifies

Mysuru: Following the allegation made by the Congress party that more than 1.45 lakh names had been deleted from the voters’ list in Mysuru district, Deputy Commissioner Dr. K.V. Rajendra has clarified that deletion of names from the draft voters’ list has been carried out in a transparent manner and as per law.

“The names have been deleted from the voters’ list only after submission of the stipulated application in Form 7, making a spot visit and a report from the booth-level officers,” the DC clarified.

Addressing a press conference at the Congress Office yesterday, Karnataka Pradesh Congress Committee (KPCC) Spokesperson H.A. Venkatesh alleged the names of around 1,45,903 voters in 11 Constituencies of Mysuru district have been deleted during the special summary revision of voters’ list. “We demand an investigation by a Supreme Court Judge and will lodge a formal complaint with the Election Commission,” he said.

“The BJP wants to come back to power and they have removed the names of voters from backward class and minority communities, who are traditional Congress supporters,” he said.

Responding to the charges made by the Congress, the DC has stated in a media statement that a large number of names had been deleted from the draft voters’ list this time because it was found that there were several names bearing the same kind of photograph and details.

“A total of 1,20,786 names had been deleted from the electoral rolls in Mysuru district. Of them, 80,930 names had been deleted as they bore the same photographs and details — similar entries with the same name, address and photo. 2,227 names have repeated and 20,440 persons have died. Also, 16,933 persons had shifted to a different place while 256 were deleted for other reasons,” the release stated.

Additional DC Dr. B.S. Manjunathaswamy said that the District Administration has held meetings with political leaders of different parties as per procedure and informed them about the deletion of names. “So far, no political party has given any written objection over this,”  he added.

The draft electoral roll has been given to the leaders of all political parties. If there are any objections, they can make representations to the DC till Dec. 8.