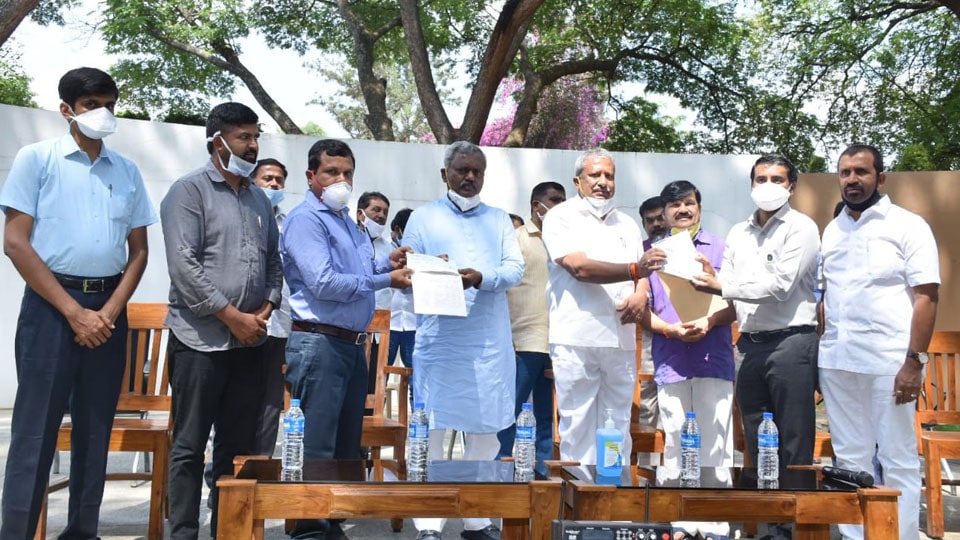 Mysore/Mysuru:  Thanks to District in-Charge Minister S.T. Somashekar, Sri Chamarajendra Zoological Gardens (Mysuru Zoo), which would otherwise have been in deep trouble owing to zero footfall following the outbreak of the deadly Coronavirus, is ‘overwhelmed’ with the donations pouring in.

The Minister, who was concerned about the maintenance of the denizens from the day the lockdown was announced, sincerely made efforts to collect funds from the people of his Yeshwanthpur Constituency, friends, philanthropists and his Ministerial colleagues apart from his pocket to tide over the Corona crisis. With Rs. 1.05 crore contribution today, so far he has donated Rs.2,31,60,000 to the Zoo.

An amount of Rs. 1,05,14,000 in the form of cheques were handed over to the Mysuru Zoo authorities this morning.

Minister Somashekar had earlier donated Rs. 73,60,000 and Rs. 45,30,000  respectively for the maintenance of the Zoo, which is facing severe financial crisis following the closure due to lockdown.

Following a request by Minister Somashekar, Urban Development Minister Byrati Basavaraju, who also collected donations from his friends and people of his Constituency (Krishnarajapuram), handed over the cheque for Rs. 84 lakh.

Speaking on the occasion, Minister Somashekar thanked all those who donated generously for the maintenance of Mysuru Zoo and added that he has also requested Amarnath Gowda and Vishwamitha of Association of Kannada Kootas of America (AKKA) for funds.

Minister Byrati Basavaraju, who also spoke said that Minister Somashekar had sought financial help to Mysuru Zoo and added that he managed to collect Rs. 84 lakh from his friends and the people of his Constituency in just two days.

He further said “We humans can ask for food when we are hungry but the animals cannot. As human beings we cannot and should not make the animals suffer in any ways and hunger is one of them. Hence I collected donations and handed over the cheque to Mysuru Zoo.”

The Zoo authorities are “touched and overwhelmed” by the large amount of donations pouring in to feed the animals. On behalf of Mysuru Zoo, District Minister Somashekar presented a memento to Minister Byrati Basavaraju for his gesture.

It may be recalled, Food & Civil Supplies Minister K. Gopalaiah too had handed over a cheque for Rs. 8 lakh to the Zoo in the presence of his Ministerial colleague Somashekar recently.