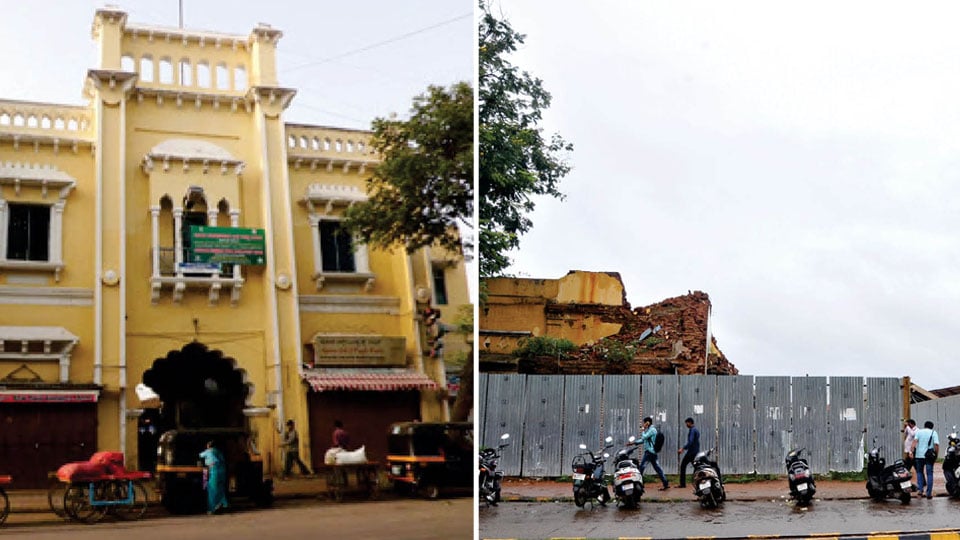 Mysuru: The month of August is coming to an end and it is raining quite heavily since the past few days, which is a good sign. However, the rains bring along with it misery and the damages it causes.

Five years ago, it was during the last week of August that a portion of the 125-year-old Lansdowne Building collapsed (August 25, 2012) and last year the more than hundred-year-old Devaraja Market building on the north side came down (August 28, 2016).

Both are heritage buildings and under the control of Mysuru City Corporation (MCC). All efforts to restore or rebuild these buildings constructed during the reign of Chamaraja Wadiyar IX are so far futile.

It may be recalled that four people had died during the Lansdowne building roof collapse after heavy rains had lashed the city. The then District-in-charge Minister S.A. Ramdas had promised to restore the building within a year or two.    Later, Chief Minister Siddharamaiah had performed the bhoomi puja and sanctioned Rs. 6 crore for its renovation in January 2015.

THEN AND NOW:The Heritage Lansdowne building.

The MCC built temporary sheds opposite the building after the tenants paid Rs. 65,000 each apart from having to pay a monthly rent. But, even after five years and with many experts coming and giving their opinion, the restoration project is still in a limbo and the shopkeepers continue to suffer with an uncertain future.

Will Chief Minister Siddharamaiah, who will be in the city on August 29 and 30 to lay foundation stone for the installation of a Panchaloha statue of Dr. Sri Shivarathri Rajendra Swamiji near Gun House Circle and to unveil the statue of Dr. B.R. Ambedkar in front of the Town Hall, cast his eyes on the condition of these two heritage buildings and do something? Or will they continue to be an eyesore for the thousands of visitors to this heritage city during Dasara?

The Devaraja Market building on the north side entrance had collapsed on August 28 last year. Luckily, there was no casualty here as all the tenants had been vacated nearly four months before the structure came down.

A former tenant of one of the shops at the entrance to the Devaraja Market, speaking to Star of Mysore on condition of anonymity said, “We do not have a sense of history at all. The Devaraja Market is the pride of Mysuru and even international tourists who come here are in awe at the way the market was planned more than hundred years ago. But the callous attitude of the Corporation and the Government shows that they do not have any pride in their culture and heritage.”

It is more than a year now since the front portion of the buildings with many shops were brought down by the MCC. The shopkeepers were promised that they would be restored their shops at the earliest. However, there is no sign of any work being taken up.

It may be recalled that when the Devaraja Market had caught fire in 1981, more than 350 shops had gone up in flames, while another 600 shops were gutted in a fire in 1990 and 16 shops in 1999. But in 1981, the then founder of Jawa Factory F.K. Irani and a few other prominent citizens had immediately swung into action and restored the shops and the shopkeepers were all praise for the initiative shown by the philanthropist-entrepreneur who had put Mysuru on the world map through his Jawa motorcycles.

However, things now move at a snail’s pace. The Corporation had entrusted the task of providing estimate of the restoration of Devaraja Market building to a private firm. It is said the firm had given the estimate and it had been sent to the Government for approval.

There is no such luck yet for the Lansdowne building as the Detailed Project Report for the building is not yet ready.