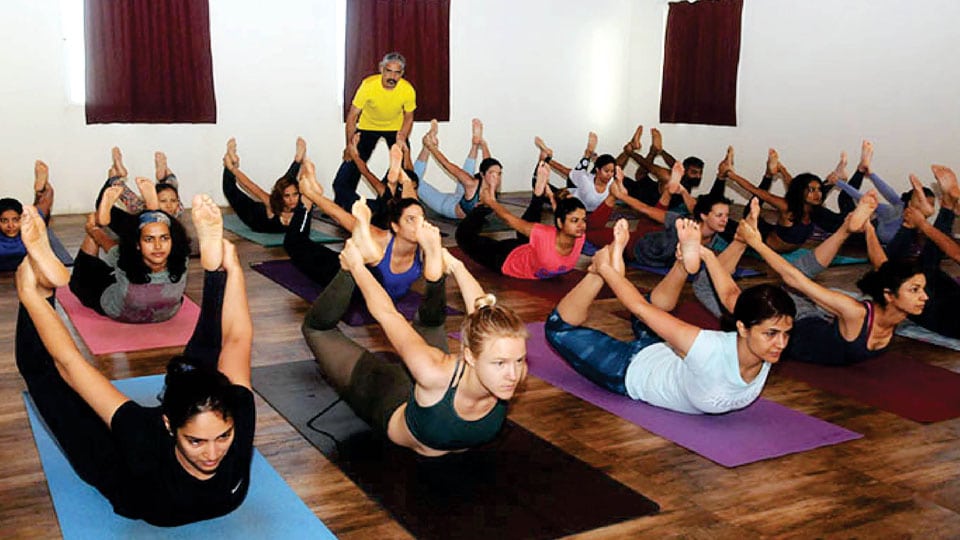 Mysuru/Mysore: As the extensive spread of Coronavirus (COVID-19) has been confirmed in foreign countries, yoga studios in city that get a lot of foreign students say they are feeling the burn. While many centres have cancelled their yoga lessons till May this year, others have communicated to offshore visitors asking them to put off their yoga tourism.

Speaking to Star of Mysore, D. Srihari, Managing Trustee, GSS Yogic Research Foundation and Vice-President, Yoga Federation of Mysuru Trust said that following the outbreak of COVID-19, there have been no bookings for yoga classes by foreign students.

“Those who have already come to Mysuru are not leaving to their respective countries and there has been no new arrivals. Many foreign students are extending their visas as Mysuru is considered safe and virus-free. Some are taking more (additional) classes or are relaxing at the confines of their homes,” he said.

There has been a stagnant growth of yoga tourism in city as there are no to and fro movements of tourists. Mysuru gets over 600 to 1,000 yoga students every summer as cold season sets-in in the northern hemisphere. “This time, there are no arrivals from UK, USA, Australia, Saudi Arabia, Italy, Canada, Russia and China, the epicentre of the disease,” Srihari said.

There are over 400 yoga centres in Mysuru and over 35 of them exclusively cater to foreign learners. “All of them have reported a loss this season as there are no new bookings. Those who have already booked have called and postponed or cancelled their bookings,” he added.

Ashtanga yoga exponent R. Sharath Jois, who is the grandson of legendary yoga guru K. Pattabhi Jois and who runs Ashtanga Yoga Institute — Krishna Pattabhi Jois Ashtanga Institute (KPJAYI) told SOM that the yoga industry has been hit badly. “We have cancelled many classes and I am forced to cancel many yoga workshops in Bangkok, Korea and Australia. There are no new bookings. India is safe but foreigners are worried that they will catch the virus during transit,” he said.

Yoga exponent Bharath Shetty who runs Indea Yoga and Yoga Bharathi Centres in city too confirmed that there have been no new bookings. “We have cancelled classes till May and have communicated to the students not to come to Mysuru. In the case of existing learners who are already here, we have taken them to laboratories for swab tests as a precautionary measure,” he said.

“As of now, the yoga tourism in Mysuru has been hit and at present, we are conducting classes only for local students and have asked foreign learners not to come here till the scare and symptoms are cleared,” Bharath Shetty added.

Meanwhile, the Edu-cation Department has asked all primary schools to conduct their annual exams (standard 1 to 9) early and as per the directive, the exams have begun today and will end in a week. Originally, the exams were scheduled to be held from Mar. 23. But the Second PU and SSLC exams will be held as per schedule. Primary school children will have  long summer holidays as exams will be over in a week or so, Department sources said.