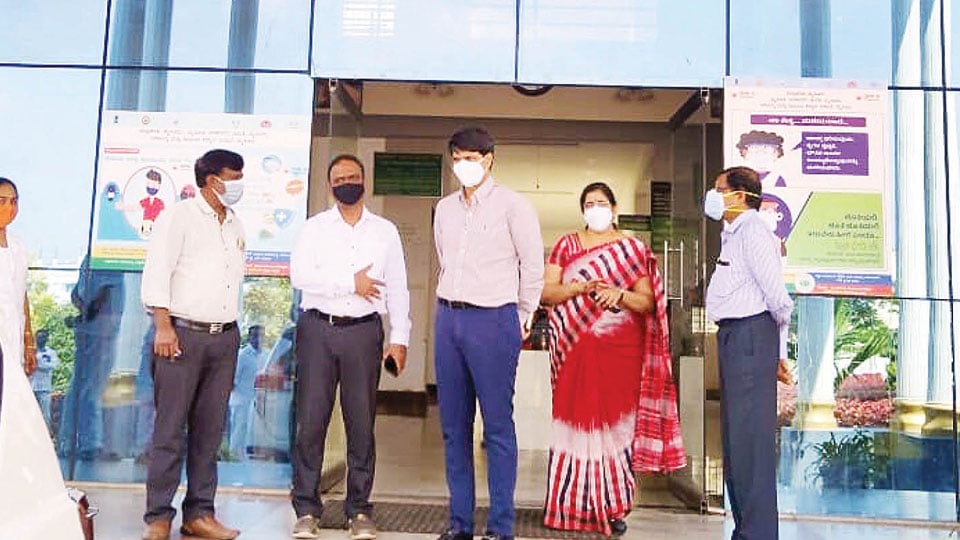 Mysore/Mysuru: The COVID Care Centre (CCC) at Karnataka State Open University’s (KSOU) Academic Bhavan in Mandakalli has begun admitting the pandemic’s third wave patients and as of today, nine patients have been admitted at the Centre. The KSOU facility is operational with 700 beds and last year, this one unit had 6,050 patients.

The 250-bed District Hospital on KRS Road that is now an exclusive COVID Hospital has reached to its full capacity and as such, patients who require medical care are being shifted to other CCCs. One more COVID Care Centre will be opened at the Social Welfare Department’s Hostel at Bogadi.

With experts predicting the onset of the third wave around the end of January to peak in February, the District Administration is pulling all stops to prevent an outbreak.

Apart from ramping up infrastructure at K.R. Hospital and the District Hospital, the District Administration’s focus is now on converting the Government Ayurveda Hi-Tech Panchakarma Hospital on KRS Road, Brindavan Extension, into a COVID Hospital. Immediate steps have been taken to set up 75 beds and in all, 150 beds will be set up there.

Yesterday, Mysuru City Corporation (MCC) Commissioner G. Lakshmikantha Reddy and MCC Health Officer Dr. D.G. Nagaraj visited the Hospital along with a team of officials and inspected the facilities including oxygen supply. The Hospital has various wings like Yoga and Naturopathy and the available infrastructure will be used to set up 150 beds and the capacity can be increased further in case of need.

Apart from the Ayurveda Hospital, the District Administration also has the Trauma Care Centre, Princess Krishnajammanni Super Speciality Hospital, PKTB Hospital and the Seth Mohandas Tulsidas Maternity Hospital that come under the Mysore Medical College and Research Institute (MMC&RI) at its disposal in case the cases further spike.

Meanwhile, in a related development, several college hostels, particularly those run by engineering colleges, have reported a spike in COVID infections since the last two days. Students who are staying in the hostels have reported the matter to the heads of institutions and several parents have alleged that COVID norms are being violated.

However, the college administrations have told the parents that as the hostelites have already taken the vaccination, there is no need for panic.  Parents have now urged the District Administration and the MCC officials to ensure the safety of the students though in many cases hospitalisation is not required and only mild symptoms are being seen.