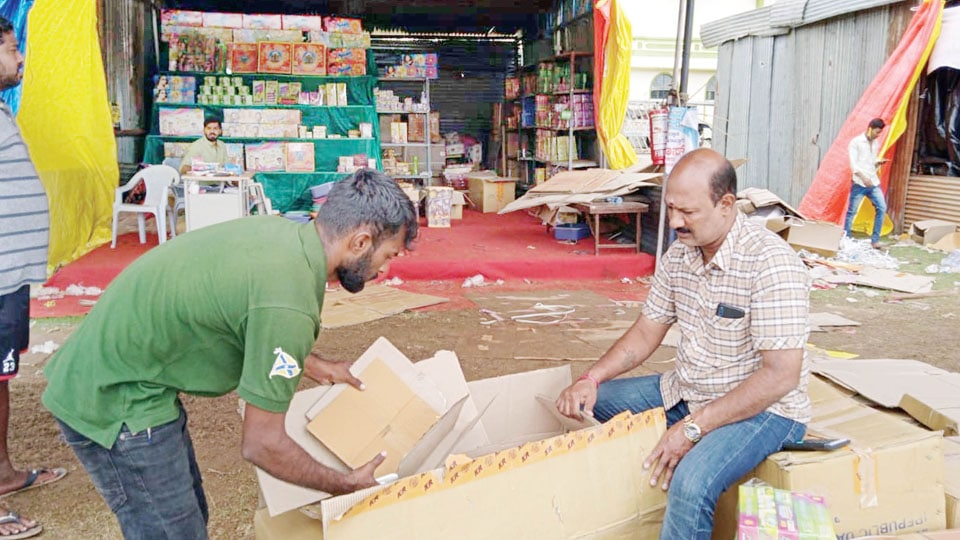 Mysore/Mysuru: After conducting moderate business for three days, cracker stall owners, who had opened their outlets at J.K. Grounds in city, began to wrap up their business this morning as the three-day permission to conduct sales concluded on Nov. 16 midnight. Cracker traders, this morning, were seen packing the remaining stocks and shifting the same in vehicles.

Vijikumar, one of the traders, who had set up the stall at J.K. Grounds after obtaining permission from the Mysuru City Corporation (MCC), Fire and Emergency Service Department and the Police, told SOM that business was dull yesterday due to rains and added that though there was no roaring business, they had moderate business. He further said that except for confusion pertaining to ‘Green Crackers,’ they did not face any problems.

Vijikumar said that as the permission to conduct sales ended, they were shifting the remaining stocks, which would be sent back to Sivakasi.

It may be recalled that a large number of cracker stalls were opened at J.K. Grounds, days before Naraka Chaturdarshi (Nov. 14), the commencement of Deepavali festival, but the sale of crackers has come to a standstill following issuance of a notice to the State Government by the High Court (HC) on the grounds that it had not defined what a ‘Green Cracker’ is, in its recent order on sale and use of crackers. The HC had observed that the Government Order was ineffective as it has not bothered to lay down meaning of ‘Green Crackers.’

Following the developments, the authorities had locked the main gate of J.K. Grounds where stalls were setup to sell crackers and Police were posted at the main gate to prevent people from entering the ground to buy firecrackers.

It was only after a clear picture on ‘Green Crackers’ arrived, the main gate of J.K. Grounds was opened and cracker traders were allowed to conduct business only after taking a written undertaking from the traders that the firecrackers sold by them were ‘Green Crackers.’