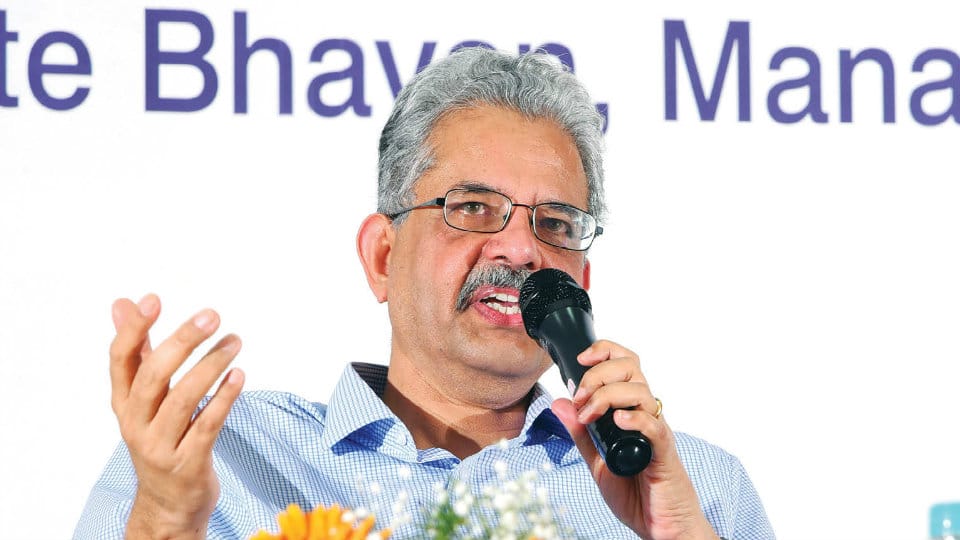 Mysuru: The sports page in a newspaper which was referred to as a backdoor entry to real journalism has come a long way and today, sports writing is an entity by itself. Covering sports is like writing about life, with the same incision, force and vision, said well-known sports writer and Editor of Wisden India Almanack (The Bible of Cricket), Suresh Menon.

Talking about ‘Literature and Sport: An Eternal Golden Braid,’ Suresh Menon, revealing that art competitions including poetry was an Olympic sport between 1912-1948 before it was withdrawn, said the most scenic delightful cricket match narration was by the English author Mary Russell Mitford in her prose sketches of village life.

American writers set their novels in sports and so have Indian writers like R.K. Narayan and Arvind Adiga in their books ‘Malgudi Days’ and ‘Selection Day’ respectively. ‘Beyond a Boundary’ by C.L.R. James which broke down the barriers of race is an excellent example of good journalism ever, he said.

Sports writing should adapt to be more meaningful, Menon said and added that newspapers and magazines may have space constraint but websites do not and it is here that we see more detailed writings.

Talking about how cricket is a religion in India, Menon quoted Indian political psychologist, social theorist and critic Ashis Nandy who said ‘cricket is an Indian game accidentally discovered by the British’ and added that it is a paradox that cricket is followed in India whether India loses or wins a match, but other sports are followed only if India wins. Menon also added that all sports need not be competitive. One should play a sport for the sheer joy or passion one has for it.