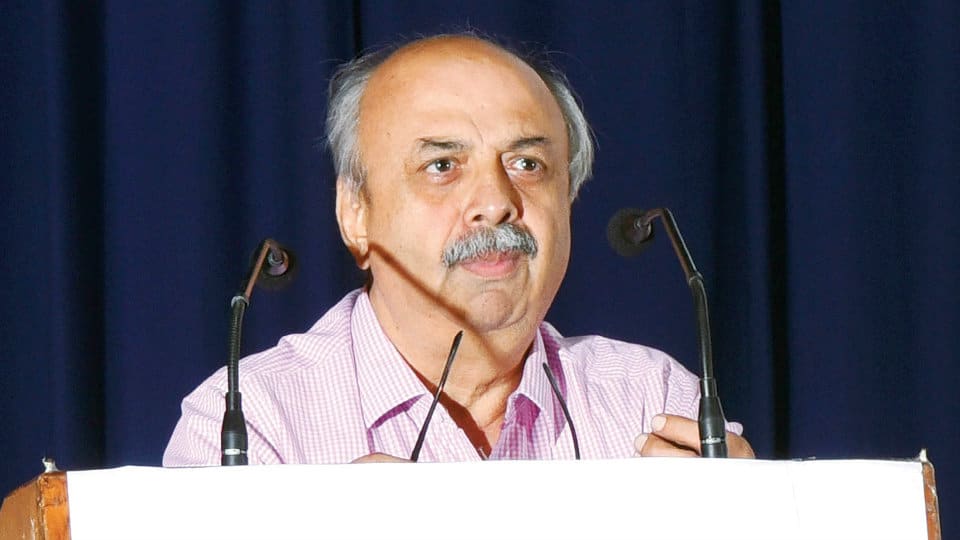 Mysuru:  “Literature, when magnified, gets attention. Without this magnification, literature would be confined only to its readers as it is an individual pursuit. Media here is the traction,” opined K.S. Sachidananda Murthy, Resident Editor of Malayala Manorama and The Week, at New Delhi.

Speaking on ‘Literature and Social Media,’ he said that writers continue to propel journalism and journalism propels Literature. Recalling his days as a young reporter during Emergency when he was told to take a bus from Bangalore everyday and write about the place he goes to, Sachidananda recalled that he most often came to Mysore from where he actually started his career. What these travels taught him was that there was much more to life and reporters need to look beyond just politics and crime.

Recounting the association between literature and journalism, Sachidananda observed that in the 17th and 18th century, newspapers were irregular and mostly written and edited by writers. He rued that unlike in the western countries in India, newspapers do not have good literary supplements. The 30 leading English newspapers in the country have one page dedicated to literature once a week.

However, regional newspapers are doing better, he said and added that ‘Bhashaposhini’, one of the oldest Malayalam Literary review journal, was established way back in 1892 and was revived by Malayala Manorama Group and continues to be a respected monthly.

Similarly, ‘Hans’, a Hindi literary monthly magazine started in 1930, has been revived and continues to be published from New Delhi. In Kannada, the monthly magazine ‘Mayura’, though not a literary journal, gives space for articles on literature and littérateurs, he added.

Saying that book publishing in India is an amorphous industry and not completely data-driven, he said publishers still don’t give out the correct figures. In India, book reviews and reviews of critics in print media is a hasty affair, he added.

Speaking about the role of literature in social media and electronic media, Sachidananda Murthy said that the former co-exists with print media whereas the latter hasn’t given much importance unless a book or a work of literature creates a controversy. Appreciating the reach of digital platforms, he said their success lay in creating new quality content.