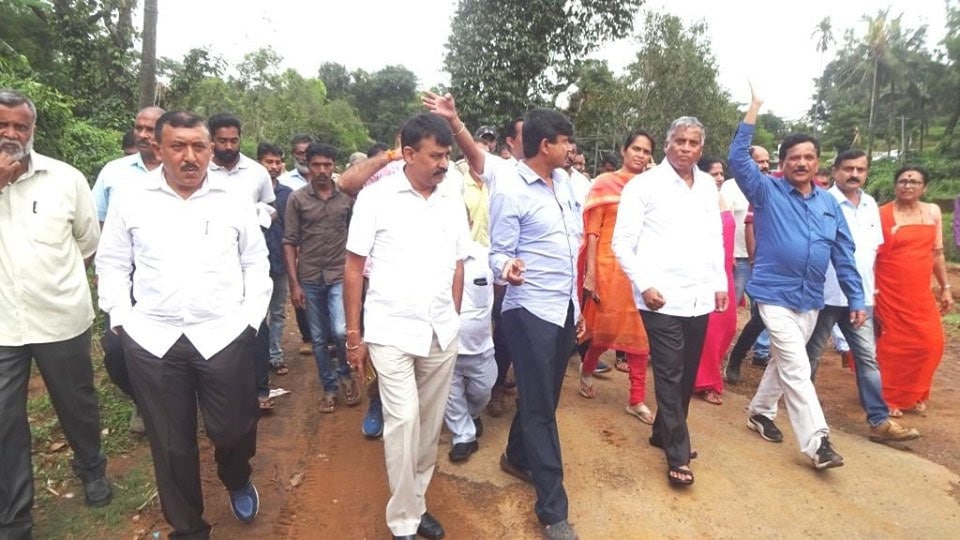 Virajpet: “Chief Minister B.S. Yediyurappa (BSY) will undertake a tour of Kodagu district either on Oct.25 or Nov.2 to inaugurate the new building of Zilla Panchayat (ZP) and hand over the houses to flood victims,” disclosed District Minister V. Somanna.

The Minister on Friday visited Thora village which was devastated in the recent floods, consoled the family members of the deceased and handed over a cheque for Rs.4 lakh to each of those families.

Speaking to press persons later, Somanna said that 10 people had died in the landslides at Thora with four going missing. He further said that on humanitarian grounds, the affected families should be permanently rehabilitated and added that the Government would take needed action.

A flood victim, Prabhu, said that though he had lost all his family members, he expressed his determination to continue to stay at Thora village.

Another victim Harish said that he had lost his wife and the house. He further said that the Government had paid compensation and added that an assurance has been given to get a house constructed and also provide a taxi to eke out a living.

Later, Somanna inspected Makutta Road. Being a State Highway, he opined that the road needs to be widened and assured to discuss with the Chief Minister in that context.

Bopaiah sought a bridge at Makutta border near Kootuhole which is being prevented by the Forest Department. He added that the road beyond Kerala border was good.

Somanna later visited the relief centre at Nelliahudikeri and gave a patient hearing to the grievances of the flood victims lodged there who sought permanent houses. The Minister assured to do the needful. The Minister held a meeting at Virajpet Travellers’ Bungalow and obtained information from the officers.