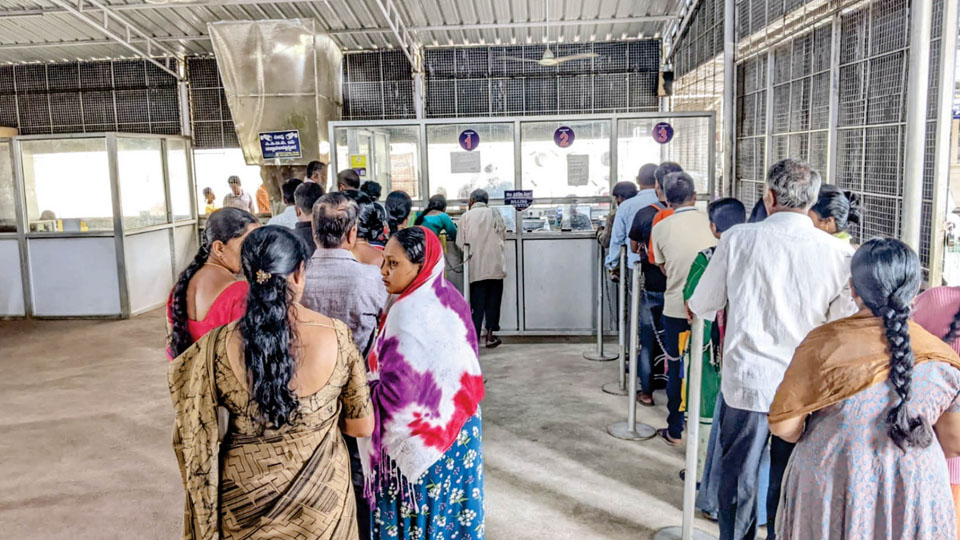 Mysore/Mysuru: Even as the State Government recently announced that patient registrations at all district hospitals are set to go online within a month and a similar system will be adopted in taluk hospitals, the State-run K.R. Hospital in Mysuru is leading a revolution stage-by-stage on computerisation of routine activities including implementation of e-hospital initiative.

Health and Medical Education Minister Dr. K. Sudhakar recently said that officials have been instructed to provide appointments online or through SMS to reduce crowding at hospitals. “This measure is being implemented to reduce long queues. A system is being developed where patients will be given information online or through SMS on which doctor to meet at what time. Patients need not come to the hospital and wait,” he said.

K.R. Hospital has started the patient registration initiative and is migrating from manual processes to an electronic system where there is more visibility, transparency and accountability. The ultimate aim of the project is patient convenience.

Middle and lower-income group patients who come from far-flung areas to K.R. Hospital wait more than one hour during OPD hours as there is tremendous pressure on the hospital staff to cater to the needs of over 1,500 to 1,800 patients every day. The situation is worse on all Mondays as there is no OPD on Sundays.

Medical Superintendent N. Nanjundaswamy told Star of Mysore that there are four phases in the e-hospital initiative and two phases have already been implemented. “The first phase is to issue computerised tokens to patients who crowd the various OPD blocks. Secondly, the Department of Radiology, X-ray, Scanning and Lab Reports have been brought under one system where a centralised laboratory sends the reports directly to the doctors and wards,” he said.

Under the manual system, patients will have to do all the running around from the OPD to the radiology wings and by the time he/she gets hold of the reports, the doctor would have left for the day, forcing the patients to come the next day or the day after. In the present system, the reports reach the respective doctors directly and the information is passed on to the patient on the availability of the doctors,  he explained.

This online reporting mechanism ensures transparency and accountability. “The system is also connected to all the wards and the doctors can easily access the patient reports. Only those who do not have a smartphone are given slips and even the nominal payment (of Rs. 10) can be made online. With this, the long queue system in front of the OPDs is eliminated,” Nanjundaswamy said.

Some of the OPDs include Medicine, Surgery, Orthopaedics, Casualty, Minor OT, Ayushman Card Counter and Ophthalmology. Also, there are counters for BPL cardholders to avail slips that mention free treatment to them. Each counter has to handle a minimum of 250 to 300 patients and as the system is computerised now, it saves time for the patients.

There are over 60 wards in K.R. Hospital including General Ward, Special Ward, ICU, CCU and MICU. There are operation theatres and all the wards have been brought under the system. “In the coming days, laptops will be given to data entry operators at each ward so that there is interconnectivity and visibility to the patients and doctors. With the new system, the long queues at OPDs and radiology units will soon be a thing of the past,”  Dr. Nanjundaswamy said.

3 COMMENTS ON THIS POST To “Crowding at K.R. Hospital OPD: Steps to solve problems”