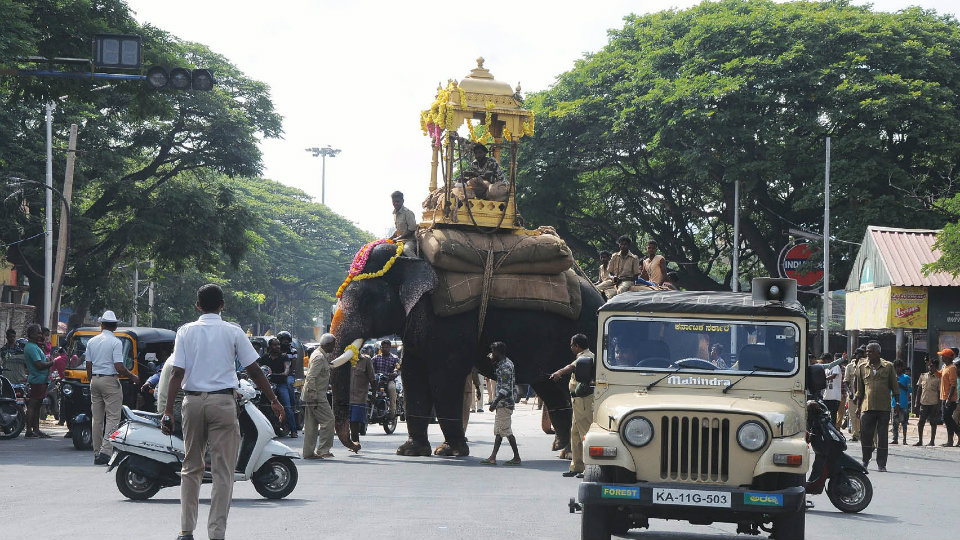 Mysuru:  A wire that was pulled to set up serial lights on Sayyaji Rao Road obstructed the smooth movement of Howdah Elephant Arjuna, who was carrying the wooden howdah for the first time this morning.

The wooden howdah touched the low-hanging wire and prevented Arjuna from moving further on the Jumboo Savari route. Due to the impact, Arjuna turned to one side and stood on the middle of the road while Arjuna’s mahout sensed that there is something wrong. As Arjuna pushed to go ahead, the wire snapped and the march continued. The incident occurred on Sayyaji Rao Road near RMC Yard where the elephants were moving along the road as part of the rehearsals.

The marching mahouts and kavadis had tea at RMC Yard Circle and was proceeding further. Arjuna was carrying the 280-kg wooden howdah (mounted on him along with sand bags weighing 370 kg) for the first time today so that it can easily carry the 750-kg Golden Howdah.

Following the wire-obstruction, traffic was held up for some time as Arjuna stood on the middle of the road. Later, the wire that had snapped was removed. 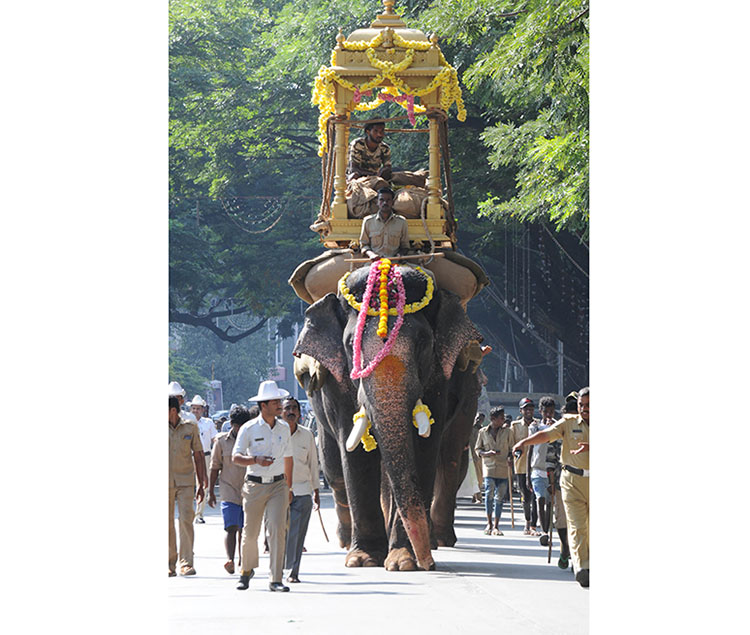 Speaking on the incident, Forest Department officials told Star of Mysore that it was a dead wire that was being set up for serial electrification of the Jumboo Savari route. “We have already informed the Chamundeshwari Electricity Supply Company (CESC) that there must be a height of at least 25 feet (the height of the elephant carrying the howdah from the ground is 22 feet) for the elephant to pass smoothly. Usually, they will follow the 25-feet norm and we will look into the issue if there is a lapse,” said DCF (Wildlife) Sidramappa Chalkapure.

Today, Arjuna was made to walk on the middle of the road (instead of the usual walk by the side not to obstruct traffic) as there were several tree branches that potentially threatened to block the wooden howdah.  “We have identified some trees on the Sayyaji Rao Road, near Ayurveda Hospital, Bannimantap and Highway Circle that need pruning. We will ensure that the tree branches are pruned for the smooth passage of the procession,” he added.

Today for the first time in this Dasara season, the wooden howdah was mounted on Arjuna. Since the last three days, a crane that has been set up inside the Palace was used to mount and de-mount the wooden howdah for Arjuna to acclimatise with the weight. Weights up to 800 to 900 kgs were mounted to test Arjuna’s capacity. One more such crane has been set up at Bannimantap Torch Light Parade Grounds to de-mount the howdah.  Yesterday there was a rehearsal that did not have sand bags due to Gandhi Jayanti as Gandhiji preached Ahimsa.