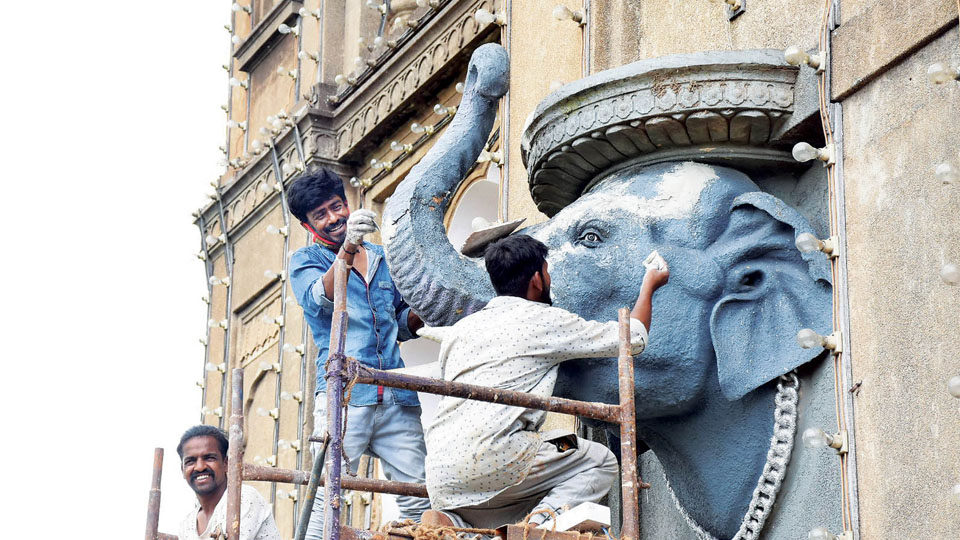 Mysore/Mysuru: Makeovers, restorations and beautification are happening in Mysuru for Dasara that is just days away. A major portion of the work is being undertaken at the Mysore Palace with painting work and minor civil works to replace worn-out portions.

The arches, Palace surroundings, gates, grills, walls and ceilings are being rubbed clean and being painted with a fresh coat to reflect newness. The defunct bulbs both inside and outside the Palace which gives golden hue to the iconic structure will be replaced in the next phase of beautification works.

Meanwhile, in a freak accident this afternoon, a civil worker sustained injuries when he fell from scaffolding near Jayamarthanda Gate. The incident occurred at around 1 pm when the painting works were on near the Jayamarthanda Gate adjacent to Trinayaneshwara Swamy Temple.

The painting on the structure had worn out and the contractor had asked 35-year-old Aftab, a resident of Ghousianagar in city, to remove the uneven surface and do a fresh coat of painting to make it uniform. Aftab had climbed 15-18 feet with the help of scaffolding and was scrubbing the portion when he accidentally fell.

Even the rope that was tied to his torso gave away. Fortunately he did not crash on the cement blocks and dividers that were kept by the side but fell on the soil. Hearing the sounds, his fellow workers rushed to the spot and summoned a battery-operated car to shift him to the main gate to be taken to a hospital.

Aftab was shifted to a private hospital where doctors have suspected a broken left leg and certain external injuries. He is out of danger. After the incident, work was temporarily stopped. Later, the workers resumed the beautification works.

Meanwhile, works have been divided in three sections and the Mysore Palace Board has called for tenders to complete the work. In the civil division, the main portion of the Palace both inside and outside will be cleaned and painted with minor repairs and restoration works. Even the portion where the members of the royal family are staying will be painted.

The Horticulture Department has been given the responsibility of placing different flowering plants in the Palace and the plants are being grown at the Department Offices. There are plans to display over 1,000 flowering saplings of various varieties.

All these works have been initiated but the Mysuru City Corporation — that wakes up just days before Dasara every year to fill potholes and do some hotchpotch patchworks and piecework — has not initiated any development works so far this year.