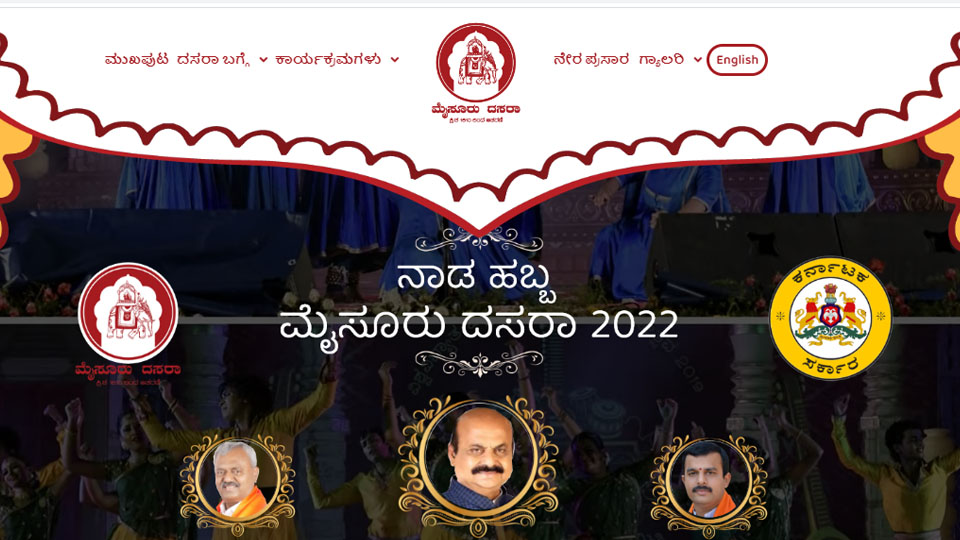 Mysore/Mysuru: In 2019, the Dasara website www.mysoredasara.gov.in was a global hit with high traffic, particularly from Bengaluru and the United States of America. Data showed that on an average, there were over a lakh visitors during the festival inauguration and they spent two to three minutes checking the attractions that were offered.

Come Dasara-2022, many tourists and youths who want to go to different programme venues and plan in advance are disappointed as there is only minimum and sketchy information about events on the website.

The website seems to have been launched in a hurry by District Minister S.T. Somashekar on Sunday. Though the web page, accessible by everyone now, has essential information and loads of historical data and data about Dasara elephants, there is not much to take away in the events section, live section and the element of interactiveness is missing.

Several youths who spoke to Star of Mysore last evening said they want to plan for events in advance but cannot do so due to lack of information. Interestingly, during the Dasara High-Powered Committee meeting, Chief Minister Basavaraj Bommai had directed officials to go for a publicity blitzkrieg locally, nationally and internationally but no efforts have been made in this direction.

“Just six days to go for Dasara and we want to know the artistes who are performing in mega events like ongoing Yuva Sambhrama and the forthcoming Yuva Dasara. Of course, there is some info about VIP guests including the President of India, the CM and Ministers. We want more live info,” said Claret Simon, a student.

“Advance information is the key to attract more and more tourists. If I am a tourist from abroad and if I open this website for information, I will be disappointed. As the website is static and non-interactive, many tourists who have actually seen the grandeur of Dasara in the past will backout this time,” said Surendra Chouhan, who has come to Mysuru to see the grand-scale Dasara-2022.

Another complaint from the tech-savvy people is that the website content is full of errors. “There are many blunders and the content has not been checked and the hygiene has not been ensured. Many sentences, names and designations look like they have been literally translated from Kannada,” said Subhash, who was mentioning how well the Dasara-2019 website had been designed.

Apart from the regular features, the website offers nothing new for a visitor. “Crucial details that actually attract visitors for mass events like Yuva Sambhrama, Yuva Dasara, names of national and international-famed artistes who are performing at the Festival are not available on the website,” said Neelima Suresh, who is a regular at cultural evening at Palace.

Official sources say in hushed tones that the cultural programmes have not yet been decided. “As all the decisions have to be taken at the highest level, many critical activities like the guests who will perform have been left undecided. Earlier, we used to prepare six months in advance and be ready with the list of noted artistes 15 days before start of Dasara and even have some artistes as a back-up in case there are cancellations due to unavoidable circumstances,” an officer, who wanted to remain anonymous, confided.

Many programmes are being chalked out in a tearing hurry and the preparations will last till the very end. Every day, a series of meetings are held to chalk out and finalise the programmes. “We are hard-pressed for time and I am not sure how we will ensure the quality of programmes in the absence of advance preparations. I feel that there is no seriousness on the part of either elected representatives or the high-level officers,” he added.

Yashwanth Kumar of Fusion Minds Technologies, who has designed and developed the Dasara-2022 website, said that they have been uploading the content as and when they have received it.

“We receive the content in batches; while some are in the text format, the others are in image format and we have to type the content to upload. The website language and hygiene are checked by the Department of Information and Publicity and there are certain time requirements for web upload. We are trying our best to make the website more informative and it will get better soon,” he said.

Praveen, a web designer who has experience in designing and uploading Government websites, said that even if Rs. 1 lakh is required for a website design, tenders have to be called and the best web design agency is shortlisted. Here, officials take shelter under ‘emergency funds’ or ‘exigency funds’ that allow deviation and they need not call for tenders and any one agency gets the contract.