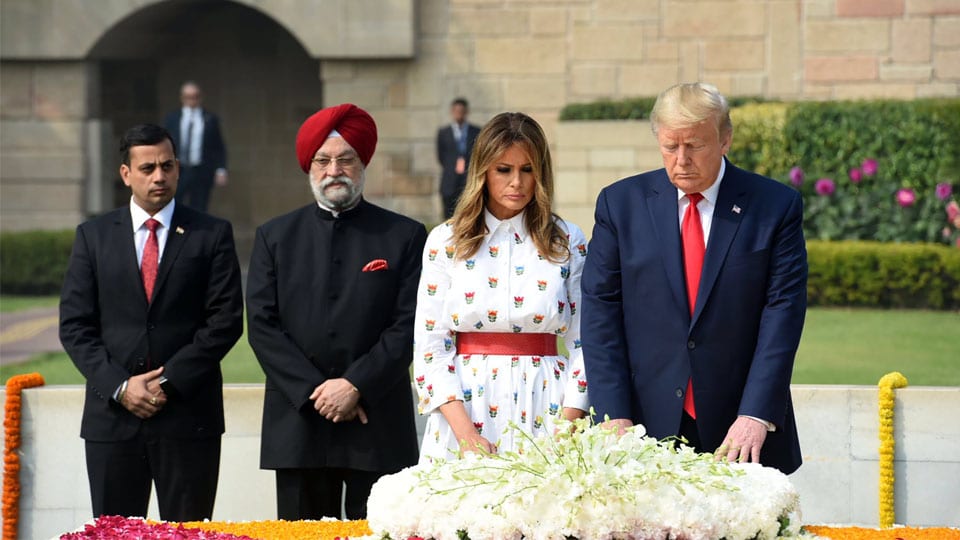 New Delhi: US President Donald Trump, accompanied by First Lady Melania Trump, who is on a two-day visit to India starting yesterday, visited Rajghat here this morning and paid homage to Mahatma Gandhi.

“The American people stand strongly with a sovereign and wonderful India -The vision of the great Mahatma Gandhi – This is a tremendous honour!,’’ Trump wrote in the Visitor’s Book.

Earlier in the morning, the US President was received with ceremonial guard of honour at the Rashtrapati Bhavan.

The United States President and the first lady were received at the gates of the Presidential Palace by a cavalcade of the President’s Bodyguards dressed in bright red with contrasting blue turbans. The entire stretch from his hotel to the Rashtrapati Bhavan was swarming with security personnel and snipers positioned at rooftops who provided an unassailable ring of security around him.

Upon his arrival at the forecourt, Trump was received by President Ram Nath Kovind and Prime Minister Narendra Modi.

He was escorted to the stage as the National Anthems of the United States and India played in the background. Trump inspected the inter-services Guard of Honour.

Soon after the Guard of Honour, the US President was escorted to a canopy where the President, the Prime Minister along with Defence Minister Rajnath Singh, External Affairs Minister S. Jaishankar, NSA Ajit Doval, Lt. Governor of Delhi Najeeb Jung, Chiefs of three Services among others welcomed him.

READ ALSO  Rangayana to stage play on Gandhiji across the State

This was ahead of the hectic schedule of meetings at the Hyderabad House with Prime Minister Modi and team.

He added, “President Trump and I have met five times over the last 8 months. We are elevating our relationship to Comprehensive global strategic partnership level. We are increasing our cooperation in homeland security. We have decided to increase our efforts to fight terror to fight organised crime, drugs, narcotics cooperation will be stepped up.”