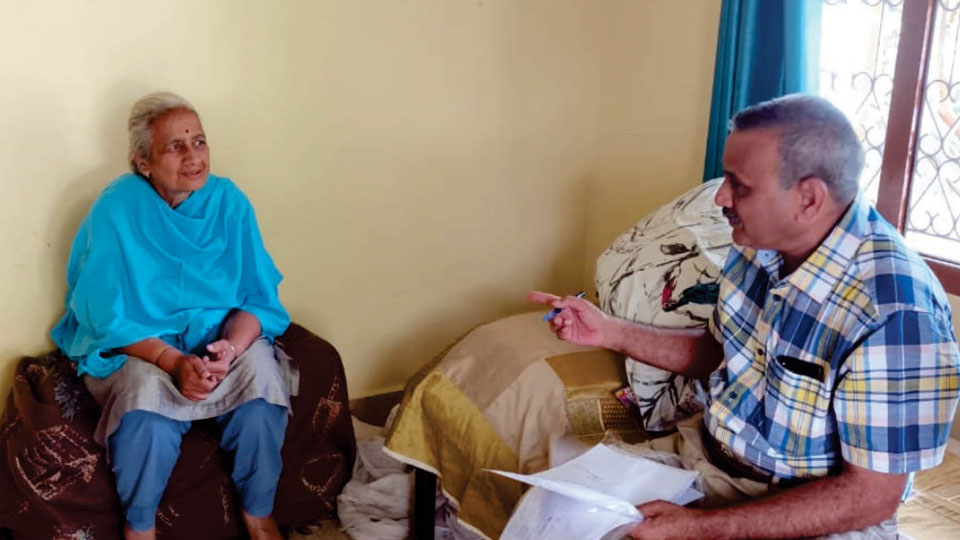 Mysore/Mysuru: Deputy Director of Public Instruction (DDPI) Ramchandraraje Urs called on Prof. Taramurthy in Jayanagar recently to enquire about Kalpana, a student from Uttarakhand, who scored 514 marks in the SSLC examinations with the help of Prof. Taramurthy.

Kalpana, who was infected with Tuberculosis (TB) disease and lost her eyesight due to the negligence of her parents, had found a Good Samaritan in Mysuru with whose help and guidance she has scored well in the examinations.

She hails from Joshimath town of Urgam Valley in Uttarakhand and learnt Kannada in just three months to write the examination in Kannada. Braving all odds and learning an initially unfamiliar language, she passed out with flying colours. Star of Mysore had published her story on May 20, under the title ‘Defeating the odds, visually-impaired Uttarakhand girl scores 514 marks in SSLC exams.’

Prof. Taramurthy had taught Kalpana all the subjects in her home and prepared her well for the examination. Kalpana’s willpower, hard work and dedication, combined with Prof. Taramurthy’s guidance got good results. Kalpana has scored 92 marks in Kannada.

Impressed by Prof. Taramurthy’s efforts, the DDPI described her as the epitome of humanity. “She has brought light into the life of a student who was robbed of education by the parents and society in general. Prof. Taramurthy is a model for many people and her selfless dedication inspires many,” he said.

Kalpana was born to Ravindra Singh and Asha. She lost her mother when she was three years old and her father married another woman. Her grandfather Ramsingh Negi became her guardian after she was neglected by her father and stepmother. She was infected by TB.

The family neglect resulted in her losing her eyesight. Without any alternative, her grandfather, who wanted to give good education to Kalpana approached Prof. Taramurthy.