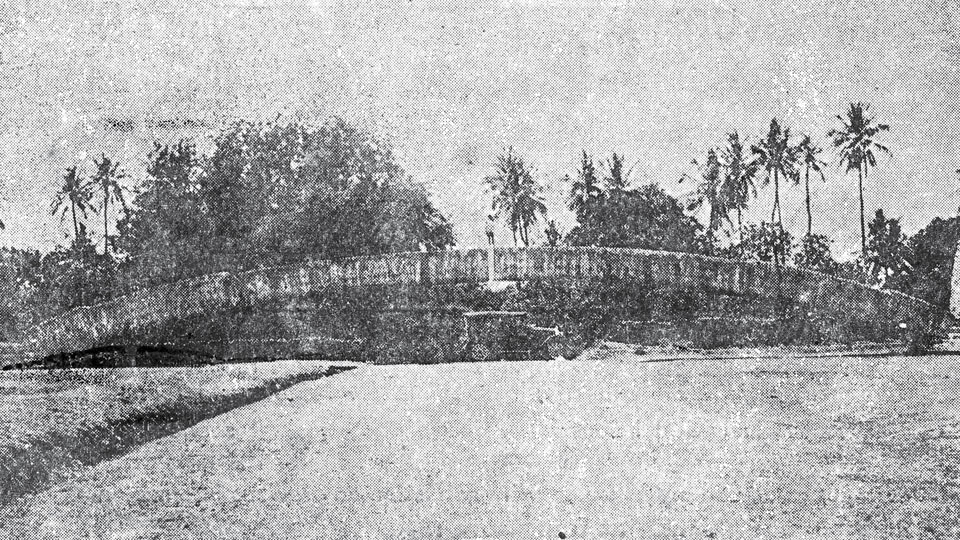 De Havilland died at Beauvoir, Guernsey, in 1866 at the age of 90. His wife Elizabeth died in 1816 at the early age of 35 and she was buried in St. George’s Cathedral Cemetery, Madras, which was conceived and built by De Havilland himself. Ironically, his wife was among the first to be buried there.

I am happy that my book ‘Colonial Landmarks in Mysuru’ has prompted Star of Mysore columnist Dr. K. Javeed Nayeem to write about the Webb’s monument and the De Havilland Arch at Srirangapatna. SOM of Dec. 13 was a pleasure to read because of the news item, “Chamundi Hill to get new stone stairway,” Dr. Nayeem’s column highlighting “Another forgotten landmark from a bygone era!” and the first part of the feature titled “Kannada Literature’s Gentle Giant”, Prof V. Seetharamaiah, popularly known as Vi.Si. by Dr. S.N. Bhagirath, grandson of renowned historian and Indologist, Prof. S. Srikanta Sastri, Professor of History, University of Mysore. While the first two were of historical significance, the last one was of literary interest.

The stairway to Chamundi Hill from the Uthanahalli side is of historical significance. While the 1,008 steps from the front side of the Hill is said to have been erected by Devaraja Wadiyar, there is no record about when the steps from the Uthanahalli side were constructed or by whom. However, it appears to be older than the steps presently popular on the front side of the Hill.

A few days back, Sadananda Raje Urs had posted the SOM’s report on his Facebook account. Reacting to it, Raja Chandra of the erstwhile royal family, who regularly posts some interesting information or the other on Mysuru’s past, observed, “I feel it is more ancient than the one from Mysore. It is my belief that the present Adajana / Hadajana near Jwalamukhi Tripurasundari Temple was the original place where Yaduraya founded the dynasty. This must have been the stairway from that period. But after Devaraja Wadiyar built the extant stairway and Mysore became capital, the focus shifted and the old one fell into disuse. More so after Douglas Rice built the Road!”

That is what I too felt when I climbed up the Hill through these steps during my high school days along with my adventurous schoolmates. I had the feeling that the stairway looked much older than those on the opposite side of the Chamundi Hill. These steps were not much in use as the foothill was almost like a forest, covered with several trees and wild growth. People were afraid of leopards, which used to make their appearance often attracted by the cattle grazing at the foothills or on the Hill. This is how these old steps came to be neglected and fell into disuse.

In his article, Dr. Nayeem has narrated about Webb’s monument near Srirangapatna (incidentally, there is one more picture of it which shows how it was fenced and taken good care of). Eagerly looking for this historic monument, I went in search of it a few years ago in Srirangapatna, but only to land at another historic monument at Ganjam erected to the memory of Lt. Col. John Grimstone. This obelisk is now identified as ‘Rana Kambha’.

Writing about the memorial, Constance E. Parsons says in her book on ‘Seringapatam’: “This tomb, not far from the church (Abbe Dubois Church), is marked by a crude white obelisk, enclosed in a high wall. The colonel was governor of the cantonment jail here in1800 and following years. It is said that his discipline was so strict that his death, suspiciously sudden, was lamented by none. Fears were entertained that his grave might be defiled and it was decided to guard it by this high surrounding wall. The inscription on the obelisk may be read by mounting a step, placed for the purpose and peering through a hole high up in the wall.”

However, the epitaph on the tomb records that this monument was erected as a tribute to the ‘affection and esteem’ by his brother officers of his Regiment Foot in 1831.

Now let me turn my attention to the historic arch constructed by De Havilland at Srirangapatna, about which Dr. Nayeem has written in his column in SOM on Dec. 13.

My father, G.L. Swamy was a pioneer in tourism in Mysuru. He wrote taluk and district handbooks and later tourist guide books, besides starting ‘The Tourist Bureau’ in 1940 for the benefit of tourists visiting Mysuru. He wrote a handbook for each taluk and district, the earliest one such being in 1939. He also printed pamphlets on major tourist places and gave them free of cost to the tourists visiting his Bureau.

In the pamphlet titled “Srirangapatna — the Historic City of Mysore”, he has shown a photograph of the ‘Swinging Arch’, probably taken by him before its collapse. In that pamphlet, he writes: “There stood until recently a masonry arch known as the De Havilland Arch. When visitors stood on the keystone and jumped up and down the Arch would swing a depth of two or three inches. It collapsed in July 1935.”

In another handbook under the same title, my father writes: “To the west of the temple, visitors could see a mass of brick lying in a line. Here stood till 1936, an arch of 112-foot single span built during Tipu Sultan’s time to demonstrate the possibility of building with country bricks a stable arch. It had a strange swinging quality, which was being tested by jumping on its keystone in the centre.”

Constance Parsons also mentions this historic arch in her book on “Seringapatam” which I have referred to earlier. She says there, “From the Memorial Mantapa (erected to the memory of Krishnaraja Wadiyar III near Ranganathaswamy Temple) we pass on to what was the garden of Captain de Havilland’s house; now a field, empty except for the famous De Havilland Arch constructed by a French                         engineer who, legend and many guide books assert, was in Tipu’s employ. He wished to demonstrate the possibility, which the Sultan denied, of building with country bricks a stable arch with a span of 100 feet. This arch, which has stood for over 130 years, is the result. The span is 112 feet, the width 3 feet and it has no parapet. The keystone, of granite, is remarkably narrow, being hardly perceptibly wider at the top than at the bottom.”

“Every visitor tests its strange vibrating property; the number of persons who have stood above the narrow keystone and shaken this ‘Rainbow Bridge’ under them must run into hundreds of thousands.”

In a footnote, the author however clarifies, “Later investigation seems to prove that de Havilland was never in Seringapatam during Tipu’s reign and that he built the arch about 1809. He designed and constructed the Banquet of Government House, Mysore. In 1809 he was shut up in (Dewan) ‘Purnaiah’s House’ with the officers who mutinied against Sir George Barlow’s obnoxious orders. He carried a flag of truce to the authorities in Mysore, and was evidently in the confidence of both parties.”

As correctly pointed out by Dr. Nayeem in his article, this interesting arch was constructed by Lieutenant-Colonel Thomas Fiott de Havilland (1775 – 1866), a British Army officer. He built it nine years after the death of Tipu Sultan and four years after the Wellesley Bridge was constructed in 1804 by Dewan Purnaiah across the Cauvery at Srirangapatna. De Havilland conceived this Arch more as an experimental one. It had a span of 110 feet, a height of 11 feet, and a thickness of three feet.

Married to Elizabeth Saumarez in 1808, they had two sons and two daughters. De Havilland died at Beauvoir, Guernsey, in 1866 at the age of 90. His wife Elizabeth died in 1816 at the early age of 35 and she was buried in St. George’s Cathedral Cemetery, Madras, which was conceived and built by De Havilland himself. Ironically, his wife was among the first to be buried there.

De Havilland obtained a cadetship in 1793 and was appointed ensign in the Madras engineers. He was appointed Lieutenant in 1796, Captain in 1805, Major in 1815, and Lieutenant-colonel in 1824. He served the force at Pondicherry in 1793 and Ceylon in 1795. He marched with Col. Browne’s force of four thousand men from Trichinopoly in the operations against Tipu Sultan in 1799 and later accompanied Baird’s troops to Egypt in 1801. After his return, he became a civil engineer and architect for the Madras Presidency, an appointment he held until he retired from service in 1825.

He was an officer of great enthusiasm and originality. Being an engineer, he was interested in building technology. Native construction methods attracted him. He saw the beautiful dome of Gol Gumbaz in Bijapur, Daria Daulat in Srirangapatna, the monuments of Hyderabad, Brihadeeswara Temple in Thanjavur, and the Palace there and was highly impressed.

One of his earliest successes was building a magnificent banqueting hall in the Mysore Residency, the present Government House, a unique structure that would have a roof without any column support. This was probably due to the patronage extended by Sir John Malcolm, the Resident of Mysore, who in 1807 gave him his first architectural contract for the above work which was to be a wedding gift to Lady Malcolm!

Encouraged by the success of his work, he proposed, when stationed at Srirangapatna, to bridge the Cauvery with five brick arches with local material. It was a very bold conception for that day. However, the authorities rejected his idea. To prove his capacity, De Havilland decided to construct a smaller one at his garden, an arch similar to the one he had planned across the Cauvery. Employing native workers from Srirangapatna and surrounding areas, he used bricks and mortar for its construction. The Arch came to be called the “Springing Bridge”.

Following his association with the 1810 Mutiny in protest against the appalling conditions of the Army in Mysore, he was dismissed from service but was reinstated in 1812. He returned to Madras and was appointed civil engineer and architect of the Presidency in 1814.

While in Chennai, he constructed the Mount Road and built the bulwark or old sea wall of Chennai (then Madras). In 1822, he wrote a report on Indian limestones and recommended that collectors should be instructed to forward specimens of limestones from their several districts for analysis and comparison of the structural values. The St. Andrew’s Presbyterian Church built by him in Chennai was considered one of the most handsome European structures in India.

The Swinging Arch, which stood as a tribute to the engineering skill of De Havilland for nearly 127 years, is now hidden amidst thorny bushes in the form of rubble.