Home » News » Debris on land in Kurubarahalli Survey No.4 being cleared 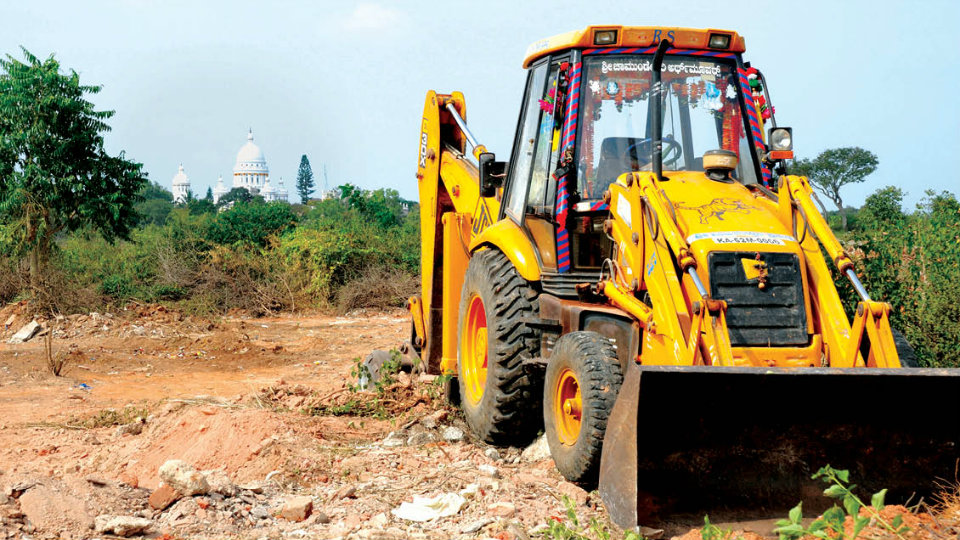 Debris on land in Kurubarahalli Survey No.4 being cleared

Mysuru: A private person has begun clearing construction debris on the Block 5A and C coming under the controversial Kurubarahalli Survey No.4, which the then Deputy Commissioner in 2015 had declared as ‘B Kharab’ land.

The debris is being shifted using a JCB machine from ‘C’ Block on the left side of the land on the road leading to Lalithadripura near Lalitha Mahal helipad to the ‘A’ Block.

K. Manu, who is reportedly undertaking the shifting of debris, said that construction debris which is dumped during night time on ‘C’ Block had resulting in debris forming a small hill with bushes and shrubs grown all around it and hence the debris is being moved to the ‘A’ Block which is at a short distance.

Manu told the SOM reporter, who visited the spot, that he is the GPA Holder of five acre land on 5A Block and two acre land on 5C Block for which Meenakshi is the owner. He further said that the then Deputy Commissioner had ordered on May 26, 2015 in RRT 540/2014-2015 that the lands in Kurubarahalli Survey No.4 as ‘B  Kharab’ and land owner Meenakshi, questioning the order, had filed a writ petition at the High Court and the Court had given a Stay Order.

He further said that he was getting the debris cleared on the land for which he was the GPA Holder and is not doing anything else.

Meanwhile, Tahsildar T. Ramesh Babu said that the 1,504 acre land coming under Kurubarahalli Survey No.4, Mysuru taluk, Kasaba hobli, is at present in ‘B Kharab’ status.

“As the matter is in the Court and Government level, no activity can be taken up on the land. I just came to know about debris being cleared on the land in 5A Block coming under Survey No.4 and will visit the spot immediately. We will install a board stating ‘1,504 acre land in Survey No.4 comes under B-Kharab and illegal entry is prohibited’,” he added.

Kurubarahalli Survey No. 4
Will seek co-operation of everyone for better Governance: Mayor
No more milk, fish and HOPCOMS outlets on Government properties