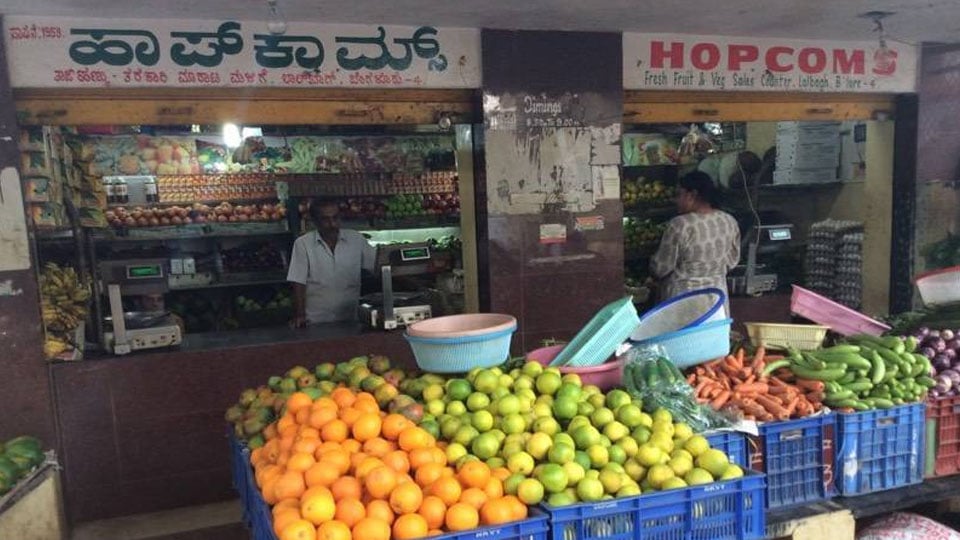 No more milk, fish and HOPCOMS outlets on Government properties

Mysuru: The Mysuru City Corporation (MCC) Commissioner has asked the Mysuru Urban Development Authority (MUDA) Commissioner not to permit Nandini Milk outlets, fish stalls of Fisheries Department and Horticultural Producers’ Cooperative Marketing and Processing Society (HOPCOMS) outlets to be set up on the footpaths in city.

Based on a Government circular, the MCC Commissioner has written to the MUDA Commissioner not to allow any of the above outlets to be set up in MUDA limits.

However, permission was being given earlier for such kind of outlets. But after the Court order that government properties must be given only after an open auction, a circular was issued where permission was stopped for such shops. Later, in the interest of the public, a letter was written to the government seeking clarification on the issue.

In spite of this, there are instances of Nandini Milk booths, fish stalls and HOPCOMS outlets being given permission in MUDA limits. After the government clarification, action has been sought against such outlets, said MCC Commissioner K.H. Jagadeesha.

Shops on footpaths increasing: In city, the number of Nandini Milk booths and fish stalls of Fisheries Department on footpaths has increased. In a few places even HOPCOMS outlets can be seen.

Such outlets have been given permission to encourage the economically weaker sections of the society to earn a living.

In the light of the Court order that footpaths have to be cleared of all impediments to make it convenient for the pedestrians to walk, they had to be removed. However, this order is rarely followed.

Since the public had raised objections to these unauthorised outlets on footpaths, the MCC Commissioner based on the government circular has written to the MUDA Commissioner not to give permission.

Reacting to this issue, MUDA Commissioner P.S. Kantharaj told Star of Mysore that the MCC Commissioner had written a general letter and as of now no permission had been given to set up the stalls.

No renewal: The Corporation officials declare that no new permits have been given for such shops to be set up on the footpaths and besides renewals have also not been done for the shops that are already there.

In spite of their claims, they have not taken any action to clear the footpaths of such stalls and hence all of them are functioning illegally.

Also, in many extensions, Nandini Milk booths and fish stalls are mushrooming. Have they got the permission of the MCC or MUDA or are they operating illegally is a question that begs an answer.

The economically backward sections are not getting any facility or benefits. Most of the people who run business on footpaths are allegedly moneyed ones. They are all surviving because of the influence of people’s representatives and officials, allege the people.  The public have urged the authorities concerned to prevent the growth of such shops on the footpaths.

“Footpaths should be meant for pedestrians. Even though there is a Court order that it should not be given for any business activity, the MCC and MUDA officials have ignored it. The true colours of a few organisations which claim to protect the interest of the people will be exposed if the issue is placed before the Court. The officials will also  be pulled up.”