Home » Feature Articles » Declining traffic sense in Mysuru: A cause for concern 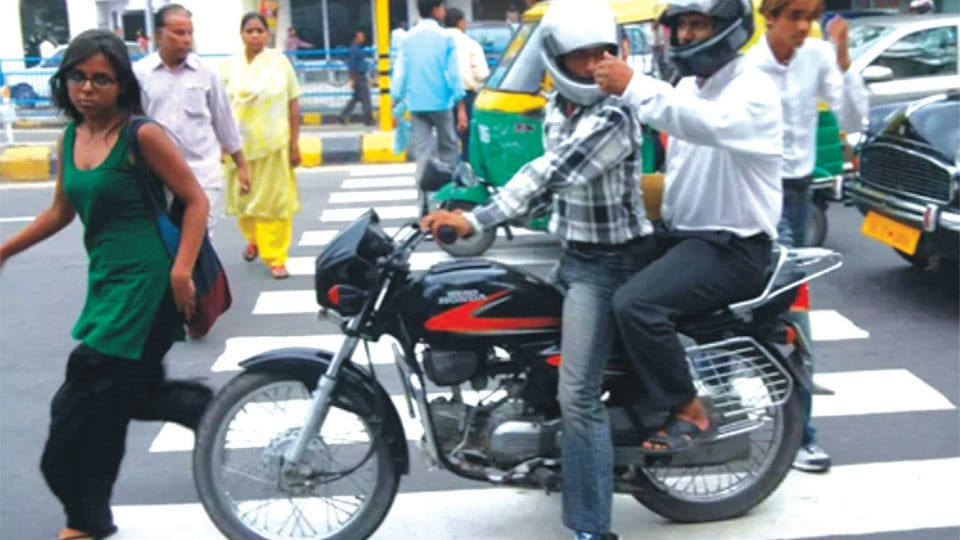 Declining traffic sense in Mysuru: A cause for concern

Efforts by organisations like Mysore Grahakara Parishat (MGP), the Police and the students of various educational institutions coming together in conducting a survey of Mysuru traffic is timely and welcome. Periodical study is necessary and will help plan for the future changes as a consequence of the growth of the city and the increasing human and vehicular population.

However, seldom do we give thought to the mess that undisciplined conduct of vehicle drivers/riders cause to traffic. This facet too should be borne in mind while finding solutions to improve traffic conditions for now and the future. There is a visible decline in discipline and respect for laid down rules among the road users.  Lane discipline, complying with the traffic light rule, using mobile phones while driving, not wearing a helmet and seat belts etc., violations are on the increase.

People are in a big hurry.  They nudge, squeeze through narrow spaces, climb on the footpath just to get ahead.  They risk not only their lives but that of others too.  At road intersections, priority is given to the vehicle on the driver’s right.  This aspect of law is almost non-existent today. Aggressive behaviour and defiance to law too is increasing.  Basic courtesies and dignified conduct are on the wane.

Zebra crossings have lost its significance and one cannot cross the street without the fear of being run over by a speeding vehicle. Minor lapses become the cause for arguments and abusive verbal exchanges in the middle of the street bringing traffic to a halt.  Imposing fines or increasing the quantum of fine is proving to be an ineffective deterrent. The young seem to have deep pockets and part with a five hundred rupee denomination or more without a second thought.

I believe a time has come to take more decisive measures.  The priority of the Police cannot be only on implementing the helmet and seat belt rule.  Vehicles of offenders should be seized and detained for twenty four hours or more in addition to hefty fine. The inconvenience caused discourages violations and repetition of it.

CCTV cameras should be used more extensively to monitor traffic violations.  Police should invite public to capture photos of wrong doers on their phones and sent to the Police for necessary follow up action.

In case of young offenders, schools and colleges should be informed of offences of their students and a letter from the Principal should be insisted upon to have the vehicle released.

Needless to say, educational institutions starting at the school level should impart lessons in good behaviour and compliance with law. Even more important, parents too need to discipline their children and regulate the money given to them.

All these measures may prove to be difficult to begin with, but it surely will be rewarding in the long run.  For this initiative to succeed, it has to become a citizen’s movement and not that of the Police alone.

2 COMMENTS ON THIS POST To “Declining traffic sense in Mysuru: A cause for concern”