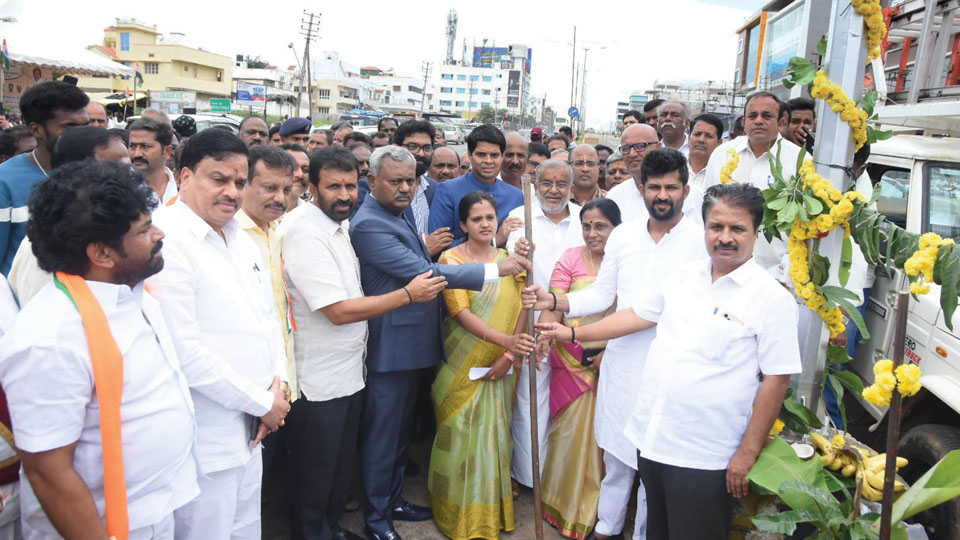 Mysore/Mysuru: At last, the works on laying underground insulated wires for the streetlights on the Ring Road have begun.

Insulated wires will be laid as the existing wires have been eaten by rodents in the 42.5-km long six-lane Ring Road. These wires were laid by Mysuru Urban Development Authority (MUDA) in 2014. Once the rodent bite-proof wires have been laid, the supply will be restored. LED lights will be fixed for extra brightness.

The LED lighting will be implemented with a Centralised Control and Monitoring System (CCMS) with smart meters and Internet of Things (IoT) controllers. This enables the integration of all LED lamps and they can be operated remotely through wireless communication.

Every year, just days after Dasara, streetlights along the road are switched off, plunging the 42-km-long carriageway into darkness, endangering the safety of people using the motorway and residents of layouts beyond the road. The increased crime rate, accidents, repeated complaints by residents and commuters and fervent appeals by the Police have forced the MUDA and the Mysuru City Corporation (MCC) to come up with a plan of action to keep the streetlights on the Ring Road glowing every night, 365 days.

The project to lay underground insulated wires was inaugurated by District Minister S.T. Somashekar at the Datagalli point of the Ring Road on Monday. There are over 2,135 electric poles along the road and 4,818 LED bulbs have to be fixed. As part of the project, the many fallen streetlights too will be restored.

As per the plans, the MCC and MUDA have come to an understanding that the MUDA will pay the MCC Rs. 12 crore to replace the bulbs, rodent-eaten wires and other cabling works.

After the lights are restored, the MCC will maintain the light poles and also pay the electricity bills.

Under the project, apart from 4,818 LED bulbs, 70 CCMS points will be set up along the Ring Road and to cover dark spots, 98 octagonal poles will be erected.