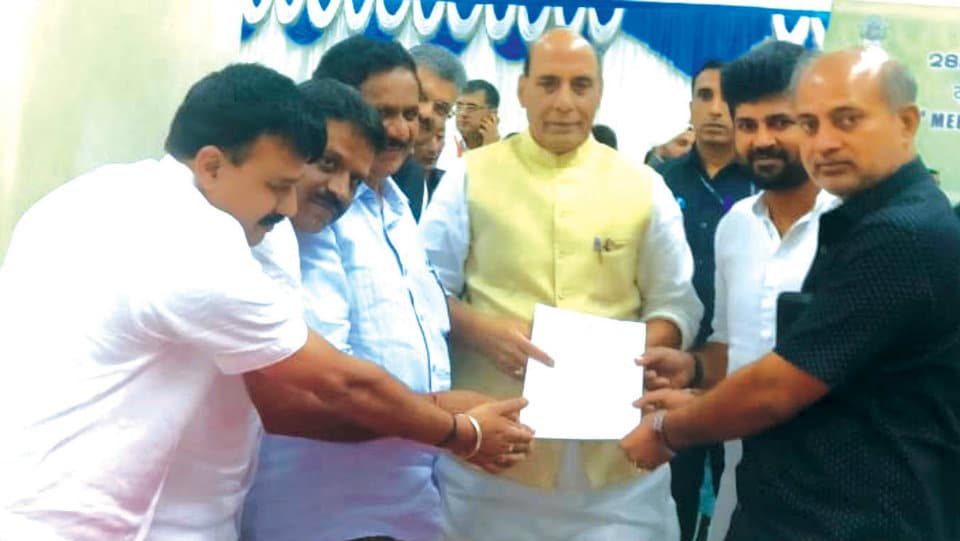 Bengaluru: A delegation led by Mysuru-Kodagu MP Pratap Simha, which met Union Home Minister Rajnath Singh at Bengaluru on Tuesday, has appealed the Minister to urge the Union Government for announcing a Rs.5,000 crore special package for rebuilding of flood-ravaged Kodagu district.

The delegation thanked Rajnath Singh for rushing Central Rescue teams to Kodagu for saving the people from floods and landslides.

A memorandum was submitted to the Union Home Minster seeking Rs.5,000 crore special package for Kodagu.

The memorandum giving statistics on heavy rainfall in the district, said that 80 houses had collapsed, while 2,225 houses were partly damaged in Madikeri and Somwarpet taluks due to floods and landslides.

Pointing out that more than 20 persons had lost their lives in the natural disaster, the memorandum said that coffee, pepper, paddy and other crops grown in 1,24,117 hectares were completely destroyed and nearly 3.5 lakh people were affected by the floods.

Highlighting that several State Highways and other roads in the district had collapsed due to heavy rains and landslips, the memorandum said that power supply network had crumbled and many coffee estates and other commercial crop fields had disappeared due to huge landslips.

Underlining the need for rebuilding of Kodagu, with many roads, bridges, houses and estates completely destroyed, the memorandum, noting that Kodagu cannot be rebuilt without the Centre’s assistance, appealed Rajnath Singh for announcing Rs.5,000 crore package.

Rajnath Singh, after receiving the memorandum, assured that he will take up the issue with Prime Minister Narendra Modi and come to the aid of Kodagu.