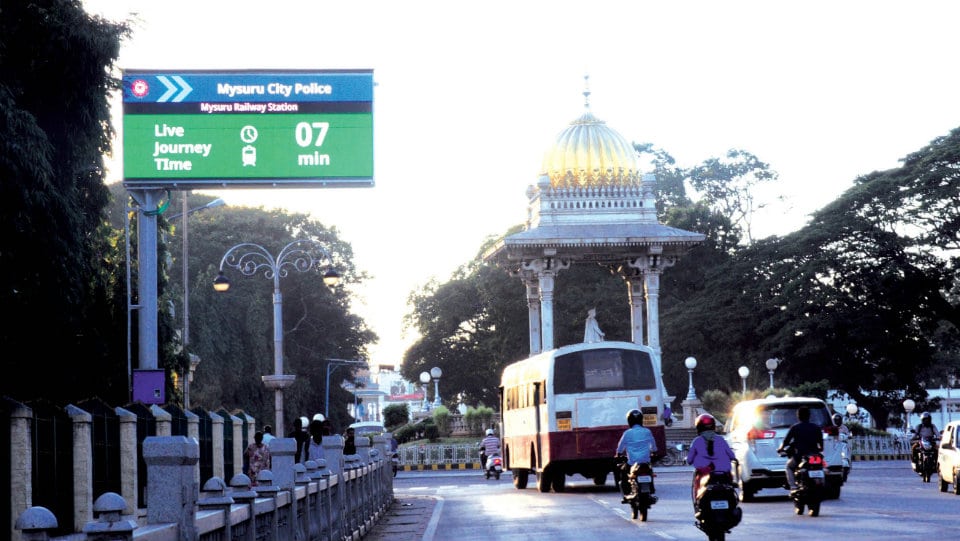 These signboards will provide real-time information about the state of the traffic and also suggest alternative routes with minimum traffic density to road users. The new system has been initiated under Mysuru Traffic Improvement Project (M-TRAC).

In the first phase, Smart VMS device have been installed near Aishwarya Petrol Bunk on Mysuru-Hunsur Highway, near Columbia Asia Hospital junction on Mysuru-Bengaluru Road and near Mysore Palace Balarama Gate on Albert Victor Road.

A few years back, the State Government had planned to introduce VMS in Mysuru and other major cities but it could fix the boards only in Mysuru, making it a the first city in Karnataka to have such a system.

These boards have been installed to maintain free flow of traffic and to ensure the safety of road users. The boards inform commuters about the density of traffic on the particular road and motorists can take an alternative road with less vehicle movement to reach their destinations.

The boards display information such as state of traffic, movement of VVIPs, traffic diversions on particular roads, traffic norms, traffic diversion, prevailing temperature, benefits of wearing helmets, highway patrolling, seat belts, fire station and ambulance availability dos and don’ts and other information which will help motorists, will be displayed on these boards. Each board, measuring 2.5×5 feet, displays messages in both Kannada as well as English languages. The boards have been designed to use red, green, and blue colours in black background so as to make them attractive and to make the messages visible to motorists.

The alphabets are displayed with 10 mm font size and they are visible from a distance of 100 metres. Certain officials in the Police Department have been given the responsibility of passing on the information to the boards through an android-compatible device.