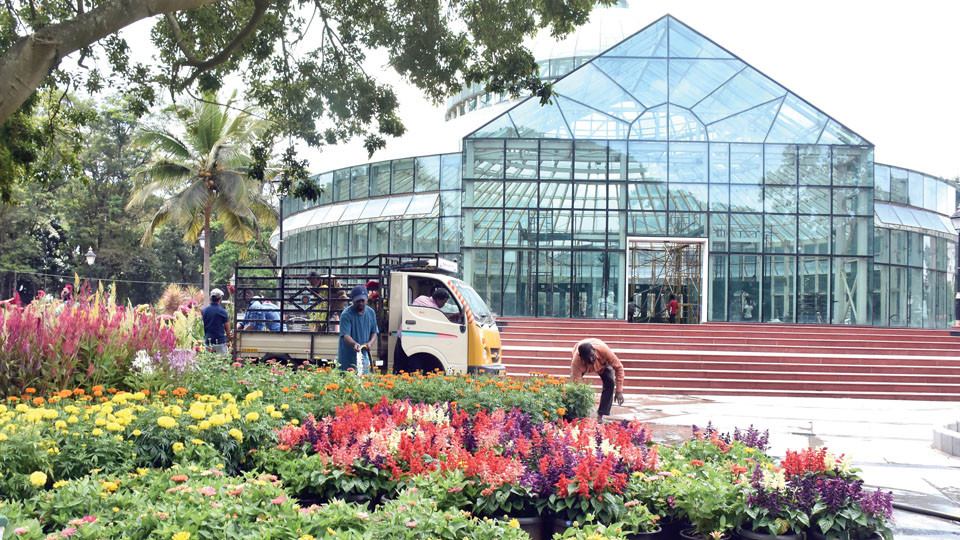 Mysore/Mysuru: Mysureans can have a glimpse of Delhi imagery during Dasara as preparations are on to recreate the floral version of Rashtrapati Bhavan at Kuppanna Park Flower Show and a miniature version of Red Fort will be on display at Mysore Palace Flower Show.

Both Rashtrapati Bhavan and Red Fort symbolise the nation’s capital and the seat of the country’s highest office. And as a coincidence, President of India Droupadi Murmu will inaugurate the Dasara festival on Sept. 26.

The floral Rashtrapati Bhavan will be the main attraction of the Flower Show at Kuppanna Park and lakhs of flowers will be used to create the floral replica. It will be on display from Sept. 26 till Vijayadashami Day (Oct. 5). With just four days to go for the festival inauguration, preparations are underway on a war-footing to create the floral wonder.

The floral Bhavan will be 50 ft. wide and 35 ft high. Over 9,000 flower bunches, each having over 30 flowers in each bunch, will be used. In all, 2.70 lakh roses and 3 lakh other flowers will be used for the replica and the floral colours will demarcate the columns and the design of the building.

The flowers will be changed twice during the 10-day festival to ensure that the flowers are fresh and there are no gaps. Over 32 varieties of flowers including African Marigold Yellow, Orchids, Celosia, Carnation, Anthurium, Gerbera, Roses, Cosmos, Blue Daisy, Chrysanthemum, Cockscomb, Kochia, Phlox, Chrysanthemum, Ping Pong, Petunia, Torenia, Dracaena, Tithonia, Zinnia, are being grown in 40,000 pots.

Apart from the Rashtrapati Bhavan, the other attractions this time are floral Vighneshwara, Dr. Puneeth Rajkumar, several models of apiculture and selfie spots inside the walking paths.

“The musical fountain inside the Kuppanna Park will come alive from 7 pm to 9 pm and keeping in mind the child visitors, an amusement park has been set up and in addition, there are food stalls at the venue,” Deputy Director of Horticulture Department K. Rudresh told Star of Mysore.

There are a couple of sponsors for the Flower Show and firms including a media company, banks and a textile shop have come forward to partly sponsor the show and this will also help the branding of the sponsoring firms, he added.

While the flower pots are being arranged by Horticulture Department Assistant Director C. Naveen and team to get the planned design, vendors who have bagged the food zone contract are setting up shops. Also, eight items are being set up in the amusement section.

Meanwhile, the floral replica of the historic Red Fort will be 60 ft long, 10 ft wide and 28 ft high. Over 15,000 saplings, ornamental plants, quick flowering plants like Felicia Daisy, Marigold, Zinnia and ornamental plants like Cactus will be on display. In all, there will be over 4 lakh flowers with 32 varieties, Mysore Palace Board Deputy Director T.S. Subramanya told Star of Mysore.