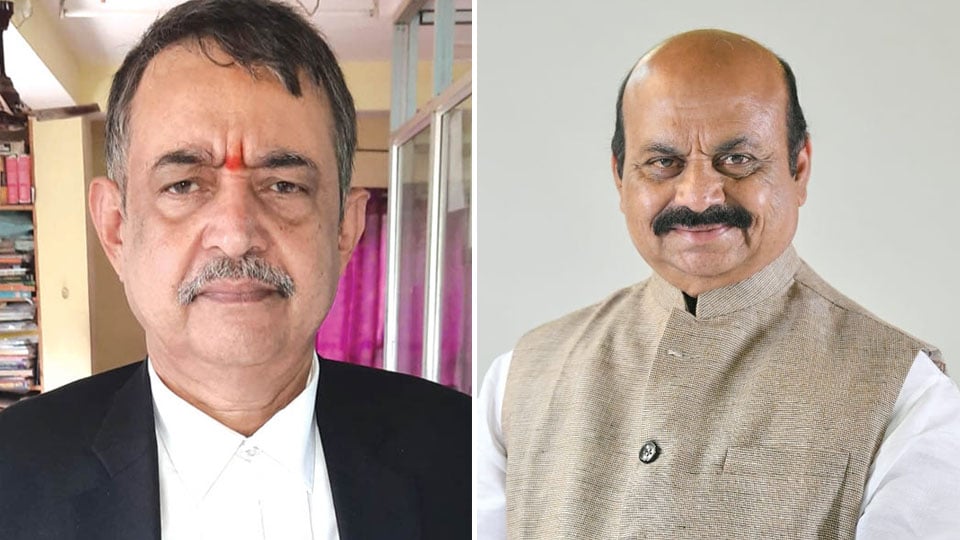 Mysore/Mysuru: Noted senior advocate from Mysuru, O. Sham Bhat has urged Chief Minister Basavaraj Bommai to withdraw the order to demolish religious structures as it is unscientific and would hurt the religious sentiments of people and the devout.

Reacting to the raging controversy over the Mysuru District Administration’s move to demolish such structures in public places citing a Supreme Court order, Sham Bhat said that the Apex Court had passed an order on Sept. 30, 2009 on a Special Leave Petition 8519/2006.

The Court said that no religious structures including Temples, Mosques, Churches and Gurudwaras must come up in public places. If at all such structures have already been constructed, such religious places must be taken up on a case-to-case basis instead of outrightly demolishing them.

According to the judgement of the Supreme Court, demolition of a Temple must be the last resort and before that there should be an attempt to regularise it if it is not going to cause any inconvenience to the public. If shifting of the Temple is not possible then only it has to be demolished.

“The Supreme Court is very clear in its judgement. If a religious structure does not have a plan it cannot be termed illegal. There are thousands of Temples that have been built much before the Municipal and Corporation laws came into existence and only later roads have come up near the Temples. It is wrong to say that such structures have been built after the road has been constructed,” he reasoned.

Before the Municipal and Corporation laws came into  existence, there was no question of seeking permission from the respective Municipal or City Corporation to build a place of worship. “That is why  Temples cannot be called illegal,” he said.

Citing an example, Sham Bhat said that the Chidambareswara Temple near K.R. Hospital in the heart of Mysuru city has been classified as an illegal structure by the Mysuru District Administration and the Mysuru City Corporation. “Actually, keeping public benefit in mind, the Temple had handed over its own land for the construction of the road. Now it is being projected that the Chidambareswara Temple has encroached upon Dhanvantri Road,” he regretted.

“The Uchchagani Aadishakthi Mahadevamma Temple in Nanjangud has a history of over 500 years and why was this Temple demolished? Unfortunately, the Mysuru DC has made a list of all Temples by the side of the roads and has submitted the same to the Government after classifying them as illegal,” the advocate alleged.

The District Administration is not following the 2009 Supreme Court order and is demolishing Temples in an autocratic manner without analysing them on a case-to-case basis as directed by the Apex Court.

“This move is unscientific and violates the letter and spirit of the Supreme Court judgement. I urge CM Basavaraj Bommai to immediately withdraw the order and also initiate steps to relocate the Temples that are in public places instead of demolishing them,” Sham Bhat said.