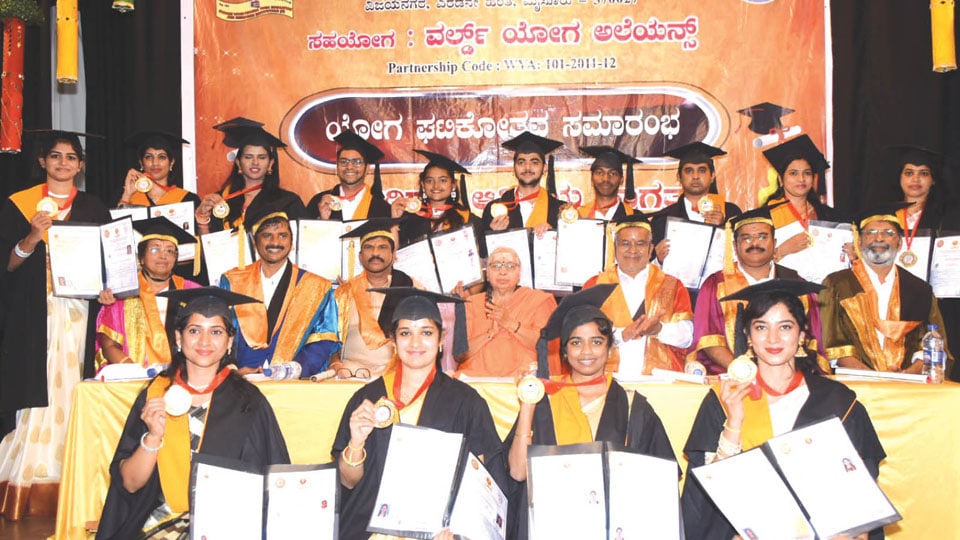 Mysore/Mysuru: Maintaining that Yoga and  ‘Dhyana’ (Meditation) will help in attaining mental peace and physical health, Chamundeshwari MLA G.T. Devegowda (GTD) observed that everyone including children must practice Yoga for building a healthy society.

He was speaking at the Yoga  Convocation of Mysore Vivekananda Yoga Education and Research Institution at Ganabharathi (Veene Sheshanna Bhavan) in Kuvempunagar here yesterday.

Stating that a Doctor at Mandakalli COVID Hospital had showed by example that confidence can be instilled in the minds of patients through Yoga also, GTD said that practicing Yoga will keep one afresh all through the day.

Noting that Yoga should be made compulsory at all levels of education, the MLA recalled that as a Higher Education Minister in the previous Coalition Government, he had argued for the same at a meeting of University Vice-Chancellors.

It is satisfying to note that the Yoga Institution is doing this  and the people should come in support of the institute for taking Yoga to the doorsteps of everyone, he pointed out.

GTD also assured that he will  press the Government for sanctioning a Yoga College to the city in the coming days.

Institution’s Sucharita Mataji, in her address, said that everyone who got Yoga certificates were feeling happy. This happiness should spread to all sections of the society by taking Yoga to every household, she added.

A total of 74 students received Yoga certificates (Diploma, Degree, PG Diploma in Yoga Education and Yoga Therapy), with 26 of them getting Gold medals.