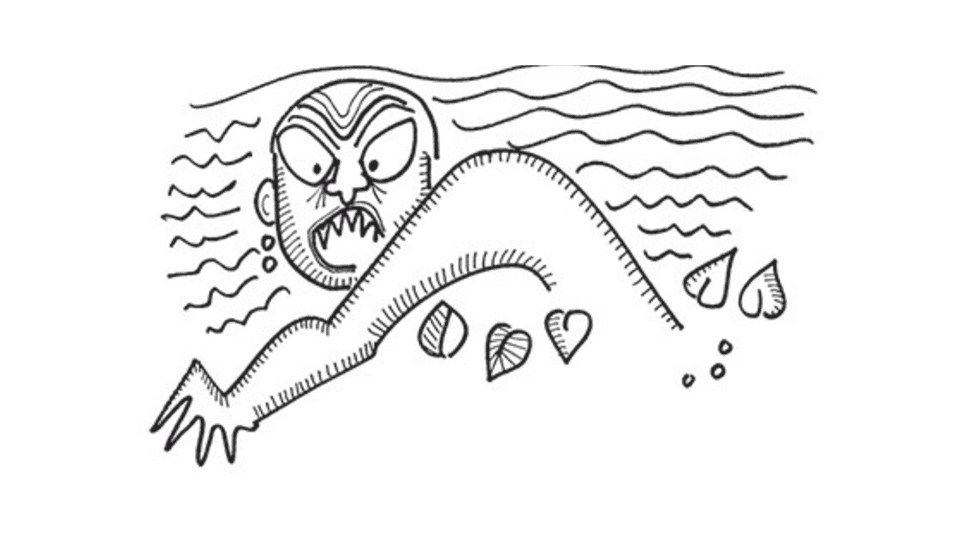 When we use the word demon in English we are instantly drawn to dark and hideous evil creatures. This idea comes to us from the Christian world that gave us the mythology of the Devil, and from the Zoroastrian world before that, where all things ugly were attributed to Angra Manyu, the smoke to the fire that was the divine Ahura Mazda.

However, it is fascinating to learn that until the Mughals painted Hindu mythology on orders of Akbar in the 16th century, demons of Puranas were never shown as having dark complexion. They were coloured red and yellow and green and had blood red eyes and fangs and claws, but this could also be the description of a deity, a gana or a bhoota or a yaksha or a rakshasa, who guarded Vaikuntha, or accompanied Shiva to a crematorium or the goddess Kottravai of Tamil lore to battlefields to feast on the dead.

In ancient Indian, especially Tamil, poetry, and temple art, we find ghouls and fearsome beings associated with the divine. They are an integral part of temples serving as attendants to and guards of gods and goddesses. They are found on walls, holding up pillars or the roof, the doorways. Some have huge potbellies and plump limbs while others have gaunt shrivelled bodies. They are the bhuta-ganas and what the Tamil poets called ‘pey’. They are closely associated with the arts. Their back serves as a stage on which Shiva dances. They serve as footstools of goddesses. Some hold celestial umbrellas and flags. Their heads with blood dripping fangs are often located atop doorways and in the arch behind the image of a god.

READ ALSO  The rise of Durga

In Tamil literature, the ‘pey’ is linked to devotion. The first poet-devotee of Shiva (Nayamnar) is imagined as a shrivelled female ‘pey’ from Karaikal. She chose to become this fearsome creature, not the pretty woman she was, so that men would not chase her and she would be free to pursue her adoration of Shiva. The first poet-devotee of Vishnu is also ‘pey’. Born of a flower, he takes shelter in a crowded pavilion on a rainy day where he experiences the presence of God and bursts into song. He is one of the first Alvars, those immersed in divine love.

In the 11th century, we learn of Chola kings whose ancestry is traced to a ‘pey’ who belongs to Kali’s retinue. The poet who praises his lineage describes various ghouls waiting to relish the blood and flesh of those killed when he invades Kalinga. He goes on to describe different kinds of ghouls: the Brahmin pey who speaks in Sanskrit, the Buddhist pey  who want to eat human brain and even Jain pey who strain human blood to remove human hair.

In Mahabharata, Bhima is married to a rakshasa woman called Hidimbi and has a son called Ghatatkocha. Hidimbi’s brother, Hidimba, in Tamil mythology, carries mountains tied to a bamboo pole on the instructions of Parvati and carries them south to where Kartikeya resides after having had a fight with his father, Shiva. Hidimba thus is not a ‘demon’ but a part of Shiva’s gana. Vishnu’s bhakta, Prahalada, is an asura, whose son Virochana and grandson, Bali, are celebrated in Indian lore for their generosity. Vibhishana is a rakshasa, but also a great devotee of Vishnu. Thus words like ‘asura’ and ‘rakshasa’ and ‘pey’ and ‘bhoota’ and ‘gana’ perhaps do not mean demon in Indic traditions — rather something powerful, fearful and unrefined, but certainly not ‘evil’..