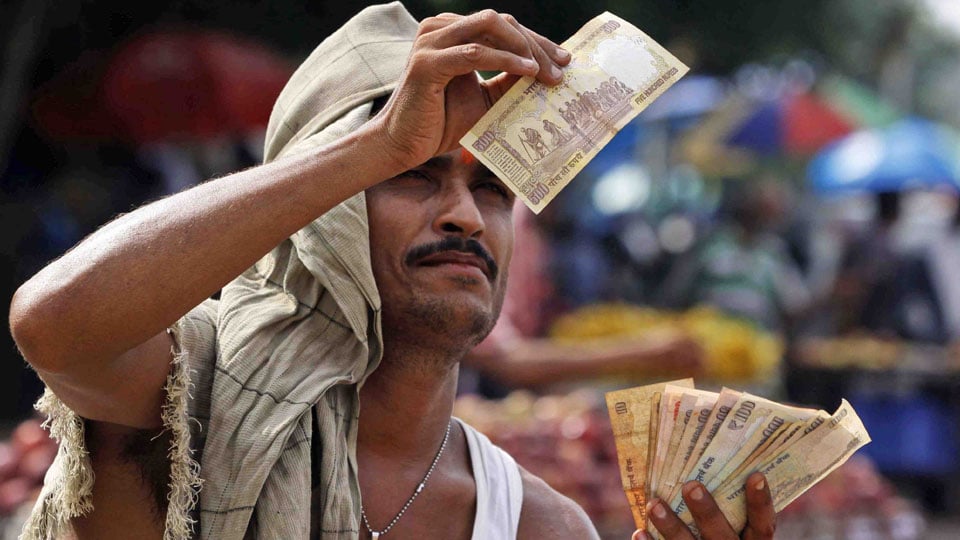 Mysuru:  It is exactly a year ago since Prime Minister Narendra Modi sprang demonetisation surprise on the country. Even after a year, the opinion is divided over whether it was a good move or a bad one.

Even as the Opposition decided to observe Nov. 8 as ‘Black Day’, the ruling BJP is going all out to defend demonetisation. Meanwhile, ‘Black Day,’ was observed in three places in the city opposing demonetisation.

The Congress took out a procession from the Congress Bhavan near the City Railway Station, here this morning and the protesters wearing black band on their arms and head marched on JLB Road, passing through Metropole Circle and reached the DC Office. They shouted slogans against demonetisation and Prime Minister Modi.

District Minister Dr. H.C. Mahadevappa joined the protesters and addressed the gathering. He said that even after one year of demonetisation, the country has not progressed economically and its objectives of fighting terror, eliminating corruption, black money and fake notes has not yielded the desired results.

“In 1991 when Narasimha Rao was the Prime Minister and Dr. Manmohan Singh the Finance Minister, the GDP had gone up to 8.5 per cent because of the economic liberalisation they introduced. However, Prime Minister Modi with his dictatorial attitude and unilateral decision plunged the nation in disarray. He asked for 50 days time to set things right but even after 365 days things have not improved,” he charged.

Meanwhile, the members of the Social Democratic Party of India (SDPI) staged a protest near the Nehru Circle close to the General Post Office. Calling it the ‘Demonetisation Accountability Day,’ the protesters demanded to know how much of black money was unearthed, what happened to fake notes, did it impact fight against terrorism. “Except bring untold misery to people what demonetisation has done. What happened to all the promises that Prime Minister Modi made?” were the questions raised by the protesters.

Farook Ur-Rehman, Popular Front of India State Secretary said that the GDP growth has come down to 5.4 per cent growth. It is only people like Amit Shah, Ambanis and Adanis who are growing and the move has not benefited the common man.

SDPI State General Secretary said that it was a foolish decision of the Government and Modi is behaving like a dictator. Secretary Abdul Majid, VP Puttaswamy, District Working   Amjad Shafi and others were present.

Prajnavanta Nagarika Vedike members meanwhile, offered shraddanjali and floral tributes to Rs.500 and Rs.1000 currency notes and chanted Shanthi Mantra. They praised the bold decision of Prime Minister Modi. One of the members K. Raghuram said that demonetisation has done only good to the country. The GDP growth rate had come down not because of demonetisation but because of excess amount of fake notes and once this comes down then GDP growth will improve.

demonetisation
Thoughts on Patriotism Nationalism and Jingoism – 1: Inspired by Ramachandra Guha and Art Buchwald
CET to be held on Apr. 18, 19