Home » Columns » Abracadabra By K. B. Ganapathy » Thoughts on Patriotism Nationalism and Jingoism – 1: Inspired by Ramachandra Guha and Art Buchwald 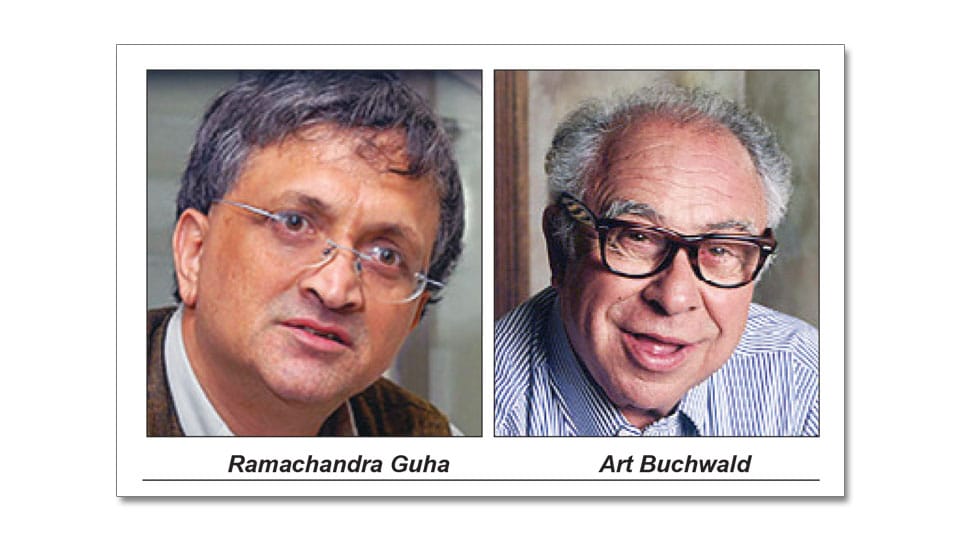 Thoughts on Patriotism Nationalism and Jingoism – 1: Inspired by Ramachandra Guha and Art Buchwald

I was a student of Political Science in the college. Now as a journalist in a democracy I am practising politics-dominated profession — journalism. My mentor Prof. G.T. Narayana Rao was teasing me for my studies in politics. According to him, as a Professor of Mathematics, it is a misnomer to call a dry art subject like politics as a Science. Not being exact, it is neither an art nor a science, he would say.

He broke into his language of passionate love, Kannada.

“Gothillava! You do not know? Politics is bunk.”

If Prof. G.T. Narayana Rao says so, then it cannot be wrong. I thought only history is bunk.

I have observed during the period of 10 years from 2004 to 2014 the governance of our country when Congress-led UPA ruled with a speechless, mauni of a Prime Minister Dr. Manmohan Singh and an enigmatic Chairperson of UPA Sonia Gandhi holding the strings on a puppet Prime Minister — puppet on a string. Remember the song?

“There is never a doubt.

Just who is pulling the strings

I am all tied up to you

But where’s it leading me to?”

This is part of the lyrics. Proof? Many, but the latest is what Jaya Jaitly has revealed in her autobiography about Sonia’s letter of SOS about Tehelka’s Tarun Tejpal.

In the snake-and-ladder game of politicians, this could have been accepted as normal. But the resentment and the provocative stance of the past regime against the new regime, backed by the left of the centre and the extreme left politicians along with the minority, is worrying. The honchos of the past regime, feeling like fish out of water sans power and sans favours, are raising questions about nationalism, patriotism, racism, jingoism and minority with least concern for the country’s safety, security and integrity in a changing world. A world where racial and religious identities have come to play an important role in respective countries in choosing their new rulers. Look at America — Trump was chosen by the White born-again Christian. Look at Germany, France and Austria — right extremists have come to occupy seats in the Parliament where there were none or just a few. Opposition to immigration and minority appeasements are issues of serious concern in these countries. No doubt it should also be of serious concern for India too.

An Indian-American walking to his workplace was asked, apparently, by a White supremacist:

“Where are you from?”

“Why don’t you go back to your country?”

So, we must have a country that we can call our own and where we can go for safety, security and refuge. Truly it is said ‘East or West, home is best’. As for Hindus all over the world India is the only home. India is the only country in the world that they can call their own. As for Muslims, Christians and Buddhists there are other countries of their religion that they can go for refuge and easily assimilate.

It is in these circumstances, in our country, there is resistance to those who refuse to sing our national anthem and respect our national flag, a symbol of national honour. This resistance is for the reason of political ideology or religious faith. Since the present Government does not countenance such a political principle, the present Government is branded as communal.  Of course, some course-correction may be needed in enforcing these symbols of national honour and sentiments. But to challenge these symbols of a nation is dangerous and a sure way to disintegrate our country for which our neighbours are waiting. We are warned.

Our British India was divided in 1947 on the basis of religion. Majority of Muslims in India wanted a separate country and it was given by a partition. However, some Muslims, like Hindus in Pakistan, stayed back in their respective countries after partition. Pakistan became an Islamic State and Hindu population there became second-class citizens and their number began to decrease in contrast to Muslim population in India. On the other hand, India chose a secular path, with a secular and socialistic Constitution which has worked well for the last 70 years keeping our country as a democracy. However, democracy became a farce in Pakistan, with many dictatorships.

This, perhaps, is the reason why the RSS Chief had recently said that “India is of Hindus, but does not exclude others.” He even cited the case of Europe and US.

A few weeks back, historian and Kannadiga Ramachandra Guha was nuancing the idea of India according to left political ideologues and the minority with distinctive visibility. He spoke of Indian States having separate flags drawing a parallel to the US. Well, it is okay with US where, like India, it is also a democracy but with a difference.

ONE COMMENT ON THIS POST To “Thoughts on Patriotism Nationalism and Jingoism – 1: Inspired by Ramachandra Guha and Art Buchwald”