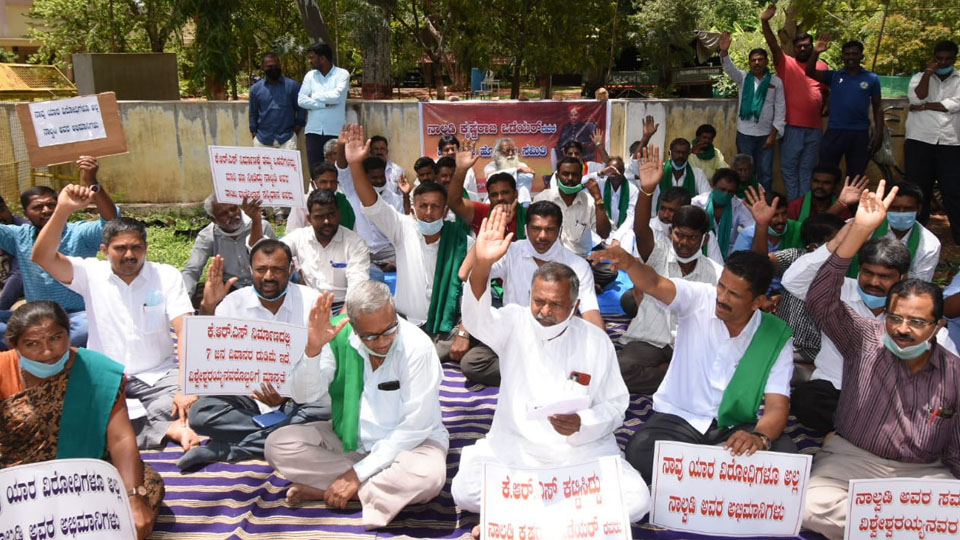 Demonstration against installation of MV statue alongside Nalwadi at KRS

Mysore/Mysuru: Strongly opposing the Government’s plan of installing the statue of Sir M.Visvesvaraya (Sir MV) alongside that of Nalwadi Krishnaraja Wadiyar in front of KRS dam, several like-minded groups under the banner of ‘Ekapratime Horata Samiti’ staged a demonstration in front of the Deputy Commissioner’s Office here on Monday.

Claiming that the installation of MV’s statue alongside that of Nalwadi will be an insult to the erstwhile Mysore Maharajas, he urged the Government not to install the statue of anyone other than that of Nalwadi in front of KRS dam.

Former Mayor Purushotham said that Water Resources Minister Ramesh Jarkiholi, who recently announced in Mysuru that the works on the installation of the statues were in the final stage, seems to have little knowledge of history. “Ramesh Jarkiholi must understand that Nalwadi made a lot of sacrifices for the construction of the dam and as such only his statue must find place in front of the dam,” he maintained.