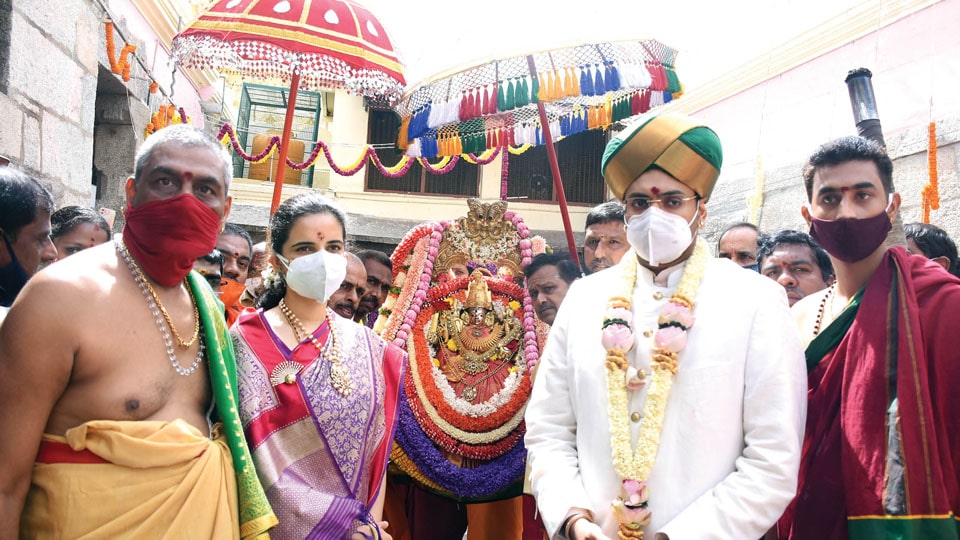 Mysore/Mysuru: Despite the ban orders prohibiting entry of devotees and other members of the public to the famed religious shrine Chamundi temple as a COVID-19 precautionary measure, the Hill temple saw a big number of devotees visiting the temple for Sri Chamundeshwari Vardhanti and third Ashada Friday today, as visiting the temple on  an Ashada Friday is considered auspicious by many. The rush was all the more unusual today as Chamundi Vardhanti is celebrated on Krishna Paksha’s Revathi Nakshatra day in Ashada.

The rush was also triggered by the visit of a good number of people’s representatives, top officials and locals residing atop Chamundi Hill, with each member of almost every family taking part in the celebration.

The rituals began as early as 4.30 am, with a team of priests led by temple’s Chief Priest Dr. N. Shashishekar Dikshith performing customary and traditional rituals. The deity was decorated with ‘Darbar Alankara’.

The entire temple structure too was specially decorated with flowers and other articles.  After the completion  of  all  customary rituals at 7.45 am, the screen at the temple’s sanctum sanctorum was opened for visitors till 9 am. After Mahamangalarathi at 9.15 am, Yaduveer Krishnadatta Chamaraja Wadiyar along with his wife Trishika Kumari launched ‘Prakarotsava’ in the temple precincts. The ritual was accompanied by ‘Mangalavadya’ and other customary  bands and practices. After this, temple  door was shut at 10 am.

A large number of Policemen were deployed at the road leading to Chamundi Hill and Hill steps.

Meanwhile, a large number of devotees who had come at the foothill were turned away due to the ban order. However, they were seen cursing the authorities for allowing a good number of VIPs, netas and top officials, while at the same time, denying them the privilege.