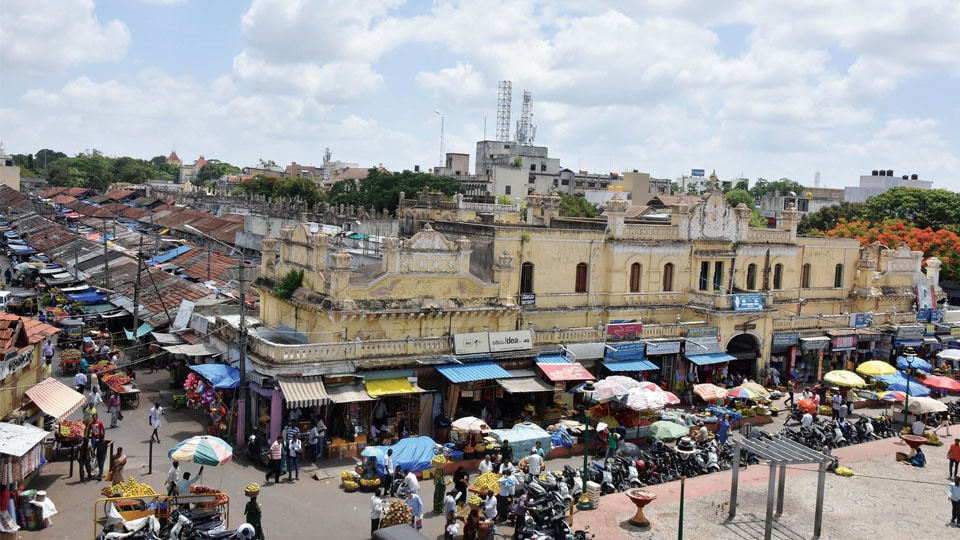 Mysuru: The Karnataka High Court has directed the District Administration, Mysuru City Corporation and the Heritage Committee to decide on the fate of Devaraja Market building within three months.

The Court has directed the authorities to decide whether to restore or demolish or re-construct the Devaraja Market building. A portion of the building had collapsed in August 2016 and two expert committees (Karnataka State Technical Task Force and Heritage Committee) have given contradictory recommendations on the heritage structure.

While the Task Force has recommended rebuilding of the structure, the Heritage Committee has suggested restoration. A few vendors had approached the Court, opposing the demolition.

While disposing a bunch of writ petitions, filed by tenants and owners of the shops of Devaraja Market, Justice Sunil Dutt Yadav also directed the MCC to consider the Special Heritage Committee recommendations keeping in mind the importance of preservation of the heritage structure.

The Court has also clarified that in light of the existing state of affairs of the building, taking note of the age of the building and portions of the building already having collapsed, proceedings to be initiated by MCC should be in an expeditious manner so as to prevent any possible loss of lives.

The Court also wanted the petitioners to cooperate with the City Civic body as it has taken the decision for their safety besides directed the MCC to protect rights of the petitioners regarding their right of re-allotment and rehabilitation in accordance with the law.

The 135-year-old Devaraja Market on Sayyaji Rao Road was constructed during 1890s. This market stands as symbol of heritage and royalty and even today the market is one of the most visited tourist places in city.

‘Will not allow demolition’

“By wrongly interpreting the HC order, the Mayor has misguided the public. The Tenants Association has taken objection to this. The structure of Devaraja Market is strong and this has been conveyed by the Heritage Committee too. There is a need to repair the building. We will not allow the demolition of the building,” he said.