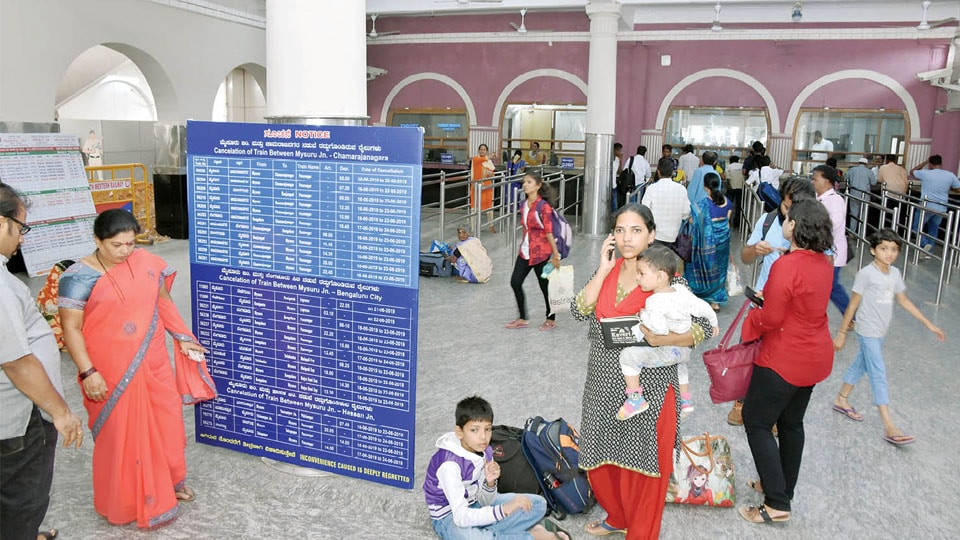 Mysuru: Several regular train passengers from Mysuru had to bear the brunt of train cancellations that began this morning. South Western Railways (SWR) had announced that several trains will be cancelled, diverted or rescheduled from June 16 to June 23 as a result of maintenance work that is underway at the Mysuru Yard.

Today being a Sunday, passenger traffic was not to the maximum. The real effect of the cancellations will be seen from tomorrow. Today several passengers were seen haggling with auto drivers to take them to Sub-Urban Bus Stand from the City Railway Station as the autos were demanding more than the metre fare. People with heavy bags and baggage were the worst affected.

Some passengers said that they had come to the Railway Station as they were not aware of the cancellations. “It was convenient for us to board the train even with weighty bags. But now we have to go to the bus stand carrying the luggage and paying for the autos,” said Krishna, who was supposed to go to Shravanabelagola.

Another regular traveller Savitha opined that the Railways could have taken up the work in phases instead of cancelling 30 trains at one shot. “This has hit us hard. We have to board a KSRTC bus to Bengaluru now and take another bus from the Satellite Bus Station to reach Majestic. Also, train fare is much cheaper when compared to bus fare,” she said.

On their part, KSRTC has allocated 45 additional buses to take passengers to Bengaluru, Hassan and Chamarajanagar apart from the regular fleet of buses.

In view of this, the Division has requested the reserved passengers in these trains to reach Mysuru Railway Station well in advance to board the buses bound for Pandavapura for their onward journey by rail. The following numbers may be contacted for further information: 97316-67979 or 97316-67962 or 97316-67964 or 0821-2865330, a release from the Railways stated.